To know Mike Conley, Jr. Is to love him.

And thanks to his one-eyed performance of a lifetime in Game 2 of the Memphis Grizzlies semifinals series against the Golden State Warriors just eight days after metal plates were surgically implanted into his face, you guys have finally gotten to know him.

Before that, most of you figured he was good little point guard, one who ranked well above serviceable though not quite elite. Michael Jackson would have defined that as stuck in the middle where the pain is thunder.

But now you all know that he is a devastating floor general whose defense is every bit as invaluable to the Griz as Tony Allen's, whose contributions on offense are much more necessary than the word necessary even implies.

The Conley effect catapulted his team to a win in a place where the visitors rarely do.

Now he's coming home. And for as little as you all knew about Conley's awesomeness, you probably know less about what the playoff atmosphere is like at the FedEx Forum.

So here it is, your definitive list of the 5 things you need to know about a home playoff game in Memphis.

You'll pregame it at the Westin Memphis Beale Street hotel across the street from FedEx Forum and, you'll probably see a Griz fan taking a picture with a player from the other team. Then you'll walk across the street to the game and that fan will be booing that player incessantly.

Visiting teams used to primarily stay at one of two premier hotels in downtown Memphis, The Peabody or The Madison. Both beautiful and both a few blocks away from game time action. Those hotels are older though and what they make up for in luxury they lack in room size. The Westin built specifically with basketball players in mind, with its oversized door frames and showers, has become the preferred lodging for the away team. It's also ridiculously convenient with only the lanes of Third Street separating it from the Grindhouse. 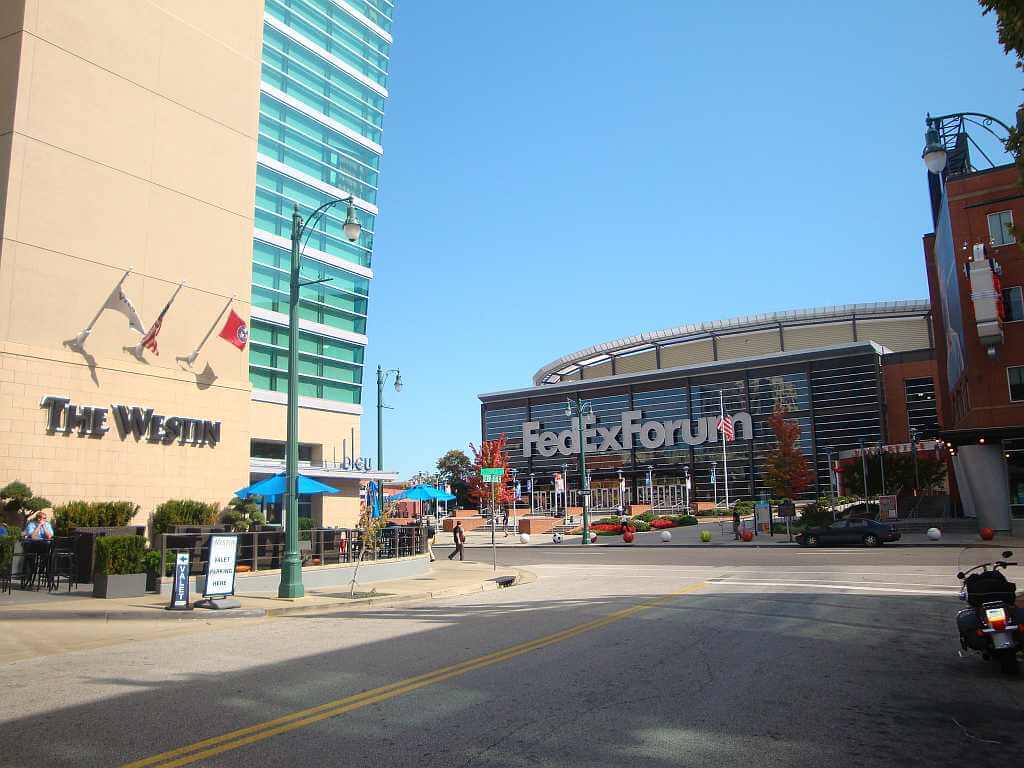 The place to be seen on even the most normal and non-marquee of game nights, people get there early during the playoffs. They bring their kids for autographs. They smile and point and wave as the visitors file into the hotel lobby and up to their rooms. They snap selfies with unsuspecting star players out of focus in the background. They hang out in the bar and talk about how nice that All-Star on the opponent's team was when he greeted them a few moments earlier. Finally, they walk a few steps, across a figurative thin line between love and hate, and wish that All-Star the worst of all games as though he were the devil himself.

The game is finally the center of attention

During the regular season, Grizzlies games have a slightly casual, social feel to them. They are more "thing to do" than "thing to which you show up and root and yell and scream". Sure, attendees focus in on the beginnings and endings of regular season games, but the in between time is all about chatting and catching up in the aisles with good friends or making new friends in the Lexus Lounge. In fact, the regular season crowd at the FedEx Forum could probably set some sort of record for most walking ever during an NBA game. So many people just walking their lights out, walking around for no good reason at all, back and forth from their seats whether in the stands or court side. Thankfully, that is not the case in the playoffs. It's 48 minutes of grit and grind and fans don't want to miss a second.

The game will sell out

You're thinking of course it will, it's the playoffs. Well, no, not of course. Memphis is one of the NBA's smallest markets and it's also one of the poorest cities in the country with nearly 30% of the population living in poverty. For minorities, that percentage jumps above 30, to 34.4%. It's also predominantly black, 63.3% to be exact. The median household income for that group is $31,576 compared to a median household income of $58,819 for white residents of the city.

So, in a city where there's not much money to go around to begin with and even less so within the group that happens to make up the largest demographic... well, you get my drift. Playoff game sellouts are not a forgone conclusion in Memphis.

Here's a great place for me to give a quick shout out to Zach Randolph and Mike Conley. Those guys bought tickets and gave them away for the home games in first playoff series against Portland. With that gesture they each gave fans who might not ordinarily have been able to enjoy a playoff game the opportunity to do so. So, yeah, more feathers of awesomeness to put in Conley's cap.

Maybe you're familiar with "Hustle and Flow". You might have heard that the critically-acclaimed, Craig Brewer-made movie was shot in Memphis and featured music written and produced by a Memphis group that is a longtime force in southern rap and blew up to be an unstoppable force in rap, period. That group, Three Six Mafia - DJ Paul and Juicy J - won an Oscar for the original song "It's Hard Out Here For a Pimp" featured in the film.

But it's another song from the soundtrack, "Whoop That Trick", with its menacing synths and its scowl-inducing baseline that is often played during Griz games. And since the playoff crowds are just a tad bit fancier than usual, you might get to see a middle-aged white man who makes a million dollars a year as an executive with FedEx pump his fist wildly as he sings along with the track. And he might actually be hugging Juicy J while he's doing it.

The most improbable post-game conversations on Beale Street

Imagine if the Pelicans played in and arena on Bourbon Street. Or if instead of walking several blocks to get to the French Quarter from the Mercedes-Benz Superdome after a New Orleans Saints game you could simply exit a side door and be right there in the midst of beautiful chaos. You get a sense of what that might be like when you come to a game in Memphis.

During the regular season, the unofficial post-game party on Beale Street is kind of dead with people worried about work or maybe church the next morning. But win or lose in the playoffs, weekend or weekday, it rivals the event of the century. Best of all, you'll talk Grizzlies specifically and NBA basketball in general with strangers as if you've known them forever. And since one or both of you will be fueled by a 32-oz. beer appropriately named the "Big A** Beer" or a Walk Me Down from anywhere on Beale, a blowout loss will be recounted as that one rebound that could have made a difference and a statement win will be hyped as a guaranteed trip to the Finals and the beginning of a Grizzlies dynasty.

Ah yes, this is playoff basketball in Memphis and it is indeed the most wonderful time of the year in the city.