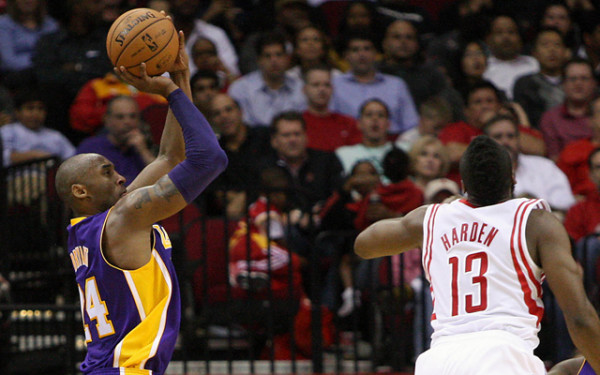 Preseason rankings and predictions are not new in any sports league, and certainly not to the NBA. That is why as NBA.com conducted its 12th annual survey of the NBA’s general managers, there wasn’t really reason to overanalyze some of the results. It’s all a collection of opinions at the end of the day, even if the opinions are highly informed. Along with the usual “Who will win it all?” questions, which have the Miami Heat three-peating, there were some rather unusual selections that stir a thought or two. Most of these answers can be chalked up to personal bias, but then there are some so confusing that they have to be rationalized.

1. Kobe Bryant is the toughest player in the NBA.

Now this particular selection is interesting mainly because the definition of NBA “toughness” is vague in itself. While no one will ever accuse Kobe Bryant of being anything but one of the hardest-working players in the history of the sport, his iron man work ethic doesn’t necessarily equate to toughness. Is it based on demeanor, ability to play through injuries or what? It can’t be leadership because that has its own spot on this survey, and while Kobe has played hurt before, is he more deserving of tough recognition over a Russell Westbrook, who never missed a game in his career up until this past season? A Dwyane Wade, who routinely takes hits banged up or not? Even a Joakim Noah, who many admire for his display of “heart” night in and night out? If this was based off composure alone, then Metta World Peace or a bruiser like Zach Randolph definitely trump Black Mamba in this regard.

It’s kind of ironic to give a survey to the general managers of the NBA and have them vote on who the best assistant coaches are, because then you question when will these guys become head coaches. 21.4% believe in Lawrence Frank, who coincidentally works under a player that he actually coached on that team. I can only imagine how it feels for Lawrence Frank to be playing second fiddle to the rookie coach Jason Kidd, and if GMs hold him in such high regard, one can only imagine why he wasn’t appointed coach already.

You would think after three straight Finals appearances and two championship wins, Erik Spoelstra would be highly regarded as a coach at this point. Yeah, we’re all aware of the "he’s just Pat Riley’s puppet" jokes and that he really doesn’t have to do anything more than stand on the sidelines. OK, we get it. Yet the NBA differs from college basketball in that this is a player-driven association. To be able to manage a team with not just three of the best players of the world, but a bench filled with former top talents who have struggled with direction before, deserves more credit. 6% of GMs seem to agree, but that number at this point is surprisingly low. Getting players that feel they can contribute more to buy in to the Miami Heat minimum approach is one thing, but being successful at it is another. He may not be the best coach by any stretch, but he’s certainly proven himself to have served his purpose better than most.

4. Which player makes the most of limited ability?

First, read that question again. Now look at the list of results:

Without any clear definition of “limited ability,” one can only assume the connotation of it implies lack of real athleticism or “natural talent.” Or as Kevin Love himself tweeted, “The White Guy Award.” Basically in a sport dominated by blacks, general managers chose to recognize who they believe to be players that somehow managed to persevere and defy the odds stacked against them. You know, because Kevin Love just being incredibly skilled at 6’10" and able to hang in there with the best of them just isn’t enough. Nor is his basketball pedigree a credit to his success. Clearly he’s just out-thinking the rest because he’s had such major adversity to overcome. Clearly.

OK, seeing James Harden at the top of this category shouldn’t be a surprise. He’s 24, and his ceiling is only going to get higher. Kobe purists really shouldn’t be all that shocked. The real question is that tied for third are Stephen Curry, Kevin Durant and Paul George? With the exception of Paul, who will most likely spend the season rotating heavily between the 2 and 3 positions, has Kevin Durant always been viewed as a shooting guard by GMs? Stephen Curry clearly can fill the void, but regardless of personal preference, he is the point guard of the Golden State Warriors. In fact, there are actual shooting guards that didn’t receive recognition from the general managers who are paid to evaluate and build with them. Positional revolutions aside, this is a case of extreme trolling or just downright disregard of players' primary roles on their teams.