The dust has settled on the first weekend of the 2016 NCAA Tournament, and we have had just enough time to catch our breath before we get to weekend two and the Sweet 16. The intensity will ratchet up as we inch closer to the Final Four, and there are plenty of interesting matchups as teams battle for a spot in the Elite 8.

Here are three of the most intriguing Sweet 16 battles set to begin tonight and continue tomorrow.

This game will be defined by a clear contrast in styles. Both teams will look to impose their will and try to make sure it is their strength that dictates the tempo.

For Iowa State, it’s all about the offense. The Cyclones will look to get up and down the floor and simply outscore the Cavaliers, evidenced by the 86 points they averaged in their first two tournament games. They have six players averaging over nine points per game, led by Georges Niang and Monte Morris.

Virginia, meanwhile, looks to stifle its opponents. The Cavaliers have been building a defensive reputation under head coach Tony Bennett and have allowed a measly 57 points per game so far in the tournament. It will be interesting to see how Bennett employs do-everything guard Malcolm Brogdon defensively against Iowa State’s myriad of weapons.

With one team scoring 86 points per game and the other allowing only 57, something will have to give in this one. It should be fascinating to see which team has more success forcing its style on the opponent.

While Virginia vs. Iowa State gives you a classic battle of styles, Villanova vs. Miami gives you two teams that are eerily similar. Both are led by strong, experienced guard play and an anchor in the post.

Miami goes as its duo of senior guards go, Sheldon McClellan and Angel Rodriguez, who are averaging 19 and 26 points respectively in the tournament. They provide the Hurricanes with leadership while also shouldering the bulk of the scoring load. Down low, Tonye Jekiri anchors the 'Canes in the paint, and if the two teams' guards end up cancelling each other out, the big guys could make the difference. 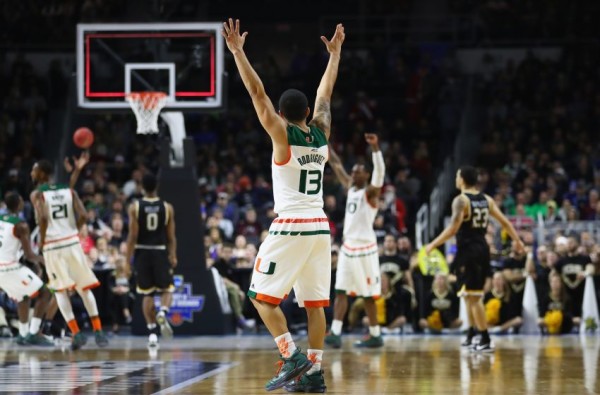 For Villanova, it all starts with senior guard Ryan Arcidiacono. He is averaging 15 points on 66 percent shooting so far in the tournament. He gets plenty of help from Josh Hart, Kris Jenkins and Jalen Brunson, but Arcidiacono is the clear leader of this team. Daniel Ochefu mans the paint for the Wildcats, and after being slowed in the Big East Tournament by a bum ankle, he seems to be feeling good again. He is averaging 11.5 points, 10.5 rebounds, four assists, three blocks and two steals per game in the tournament, doing a little bit of everything and providing balance to a very guard-reliant team.

This one is basically two teams trying to do the same things and seeing who can do it better. It appears that this will be a very close game, but Nova is slightly deeper and more balanced, and that could be enough to give the two seed the edge. Another advantage for Villanova is that Ochefu is more of an offensive threat than Jekiri. It should be fun watching these two teams go at each other in such similar ways.

Carolina has put itself in the discussion as the favorite to win the National Title with its play thus far. After easily dispatching of Florida Gulf Coast in the first round, the Tar Heels turned a four-point halftime lead into a 19-point drubbing against Providence, and it looked every bit as impressive as it sounds.

Brice Johnson has been an absolute monster, scoring, rebounding and ferociously protecting the rim. Joel Berry, Justin Jackson and Isaiah Hicks have continued to contribute, and if Marcus Paige can show any semblance of the player he was as a sophomore and junior, Carolina is going to be a very hard team to beat.

Indiana has flown under the radar a bit this season. The Hoosiers have some very perplexing losses, most notably against Wake Forest, UNLV and Penn State, but they have beaten Iowa twice, Notre Dame, Purdue and Maryland. They also won the Big Ten regular-season title and beat a Kentucky team many had penciled in for the Elite Eight or even Final Four to earn this date with UNC.

Yogi Ferrell leads the Hoosiers with 19 points and seven assists in tournament play. They will certainly need him at his best. But more importantly, they will need their frontcourt of Max Bielfeldt, Thomas Bryant and O.G. Anunoby playing at a high level to slow Johnson and keep the Tar Heels off the boards a little bit.

Will UNC continue to look like a potential National Champion, or will the Hoosiers prove that they are not to be overlooked?