It’s NBA Playoffs time and as Drake would say, “I got a really big team and they need some really big rings.”

There is no doubt that the 6 God is a fan favorite when it comes to boosting one’s confidence and in the NBA, it’s no different. Music helps players get their minds in the zone whether they’re rocking out on their way to the arena or showing off their best pregame dance moves like the former Russell Westbook-Cameron Payne duo. Let’s just say, music is life and most athletes can’t live without it.

Players want to win the title so they can rock the really big rings and put on for their city, and music is always a great motivator. As the top teams move on the second round of the 2017 NBA Playoffs, these are five songs you need to get your head in the game:

If there is any rapper on top of the world right now, it’s Kendrick Lamar. Coming off the heels of his latest album, DAMN., Lamar had fans dissecting themes and writing think pieces in a matter of 24 hours. If you’ve watched the Lakers or Clippers play over the past few years, you probably caught K. Dot sitting courtside next to the likes of Jay-Z and Beyonce. Not only is he a fan of the game, but players have taken a liking to the Compton MC – just look at LeBron’s Instagram for proof.

Fans often talk about who is the best rapper alive, similar to how they discuss who’s the greatest player in the league. “HUMBLE.” is the type of song for players who believe they’re the best and prove it on the court, similar to Lamar convincing listeners with his fire bars. “If I quit this season, I’ll still be the greatest.” Lamar gives the mindset of being the best, therefore everyone else should, “be humble, sit down.”

Maybach Music rapper Wale is known for dropping a number of motivational songs with a poetic flow. Upon the release of his fifth album SHINE, Wale opens the project with the smooth track, “Thank God.” It’s not a party song to get players hyped during the warm-up, but it’s one of those tracks to put your mind at ease and concentrate before a game. Beefs may arise on the court between opponents, but players need to learn to keep their cool. (Tell that to Draymond Green!) If a scuffle occurs on the court, let Wale remind you, “I tell my enemies, I really pray that you don’t fall/ so they can watch me ball.”

Virginia rapper Handles recruits Brooklyn MC Skyzoo and singer Charlie Rae as they’re determined to prove their greatness on the properly titled track, “Break Records.” Although the song references Olympic legend Michael Johnson, the two rappers have one goal in common, proving they can beat the greats. Players such as LeBron James and Russell Westbrook shattered records during the 2016-17 season. Although Westbrook made history and is the leading contender for league MVP, it wasn’t enough to take his Oklahoma City Thunder team to the next round. ‘Bron-Bron’ is on the other hand is determined to bring another ‘ship to Cleveland, that is if they can beat the best team in the league, Golden State.

Kap G is an underdog in the hip-hop game, but he’s already worked with hitmakers such as Chris Brown and Pharrell Williams. On his latest project SupaJefe, “Rings” is a song title that speaks for itself as Kap spits bars on living a lavish life. It helps that he explains what other players have easily thought about, but won’t admit it, “I want the ring like it’s Bron-Bron / I want the ring like I’m Draymond.” The Cleveland Cavaliers and Golden State Warriors are the last reigning champs and they both swept teams in the first playoff round this year. All the other teams who didn’t have such an easy run to the second round is striving to be like these two teams.

Let’s admit it, every player wants to win a championship, it’s the icing on the cake when you went from watching old Michael Jordan tapes to signing a NBA contract. When people discuss NBA legends, athletes such as Wilt Chamberlain, Julius Erving, Michael Jordan and Allen Iverson all come to mind. However, looking at players today, people like James, Westbrook, Stephen Curry and Klay Thompson are young legends in the making.

In his collaboration with J. Cole, Joey Bada$$ opens the song with a mindset that people will talk about him years later, “This is legendary / Always been my mission, never secondary / Getting better every January, it’s very scary / They gon’ recognize me eventually / I’ll take it if they don’t give it to me.” Being a legend doesn’t always mean getting inducted into the Hall of Fame or securing a statue outside of an arena. Legendary players are the ones people will always mention after they retire from the game.

What other songs does your favorite player need on their NBA Playoffs playlist? Let us know in the comments section!

Five Songs Every Player Needs On Their 2017 NBA Playoffs Playlist 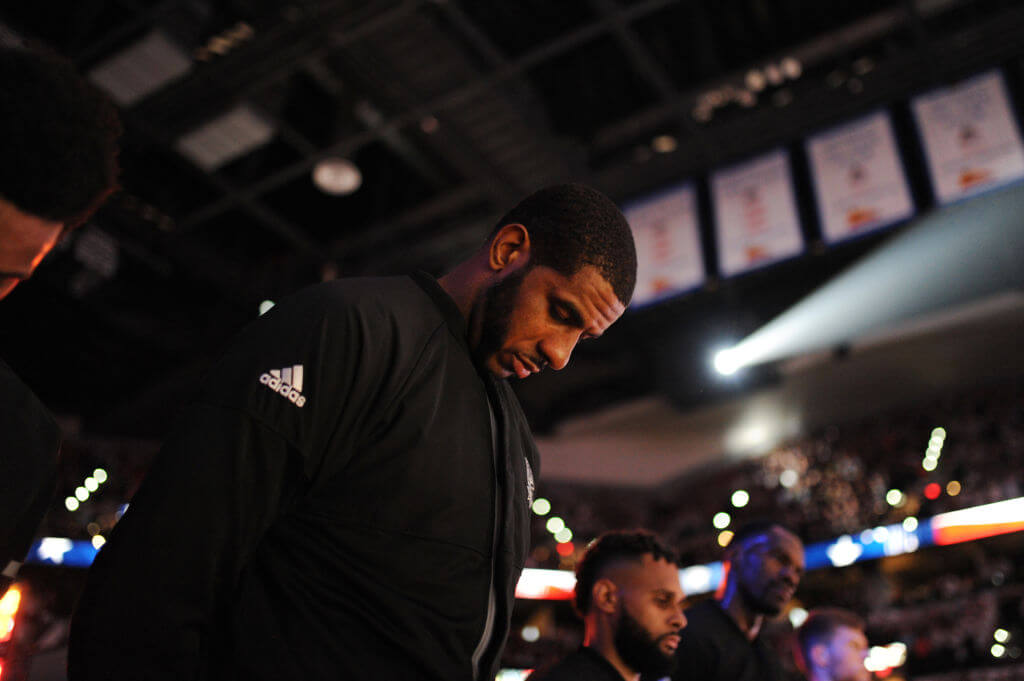