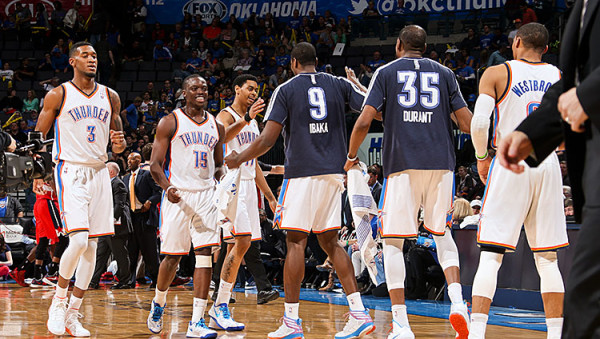 What more can be said about the Oklahoma City Thunder? There have been complaints, suggestions offered and clear frustrations all around in regard to this team. Honestly, they may have the most questions of any team going into the offseason, and it’s pretty hard to find any clear answers. While they are certainly still considered favorites in the Western Conference moving forward, changes will have to be made if they’re going to get over this current threshold. Drastic changes at that.

For better or worse, the Thunder are stuck with Scott Brooks

Having molded this core group in OKC as its team leader, there are some who would suggest that this team has gone as far as it could under Scott Brooks. If that is indeed true, what available coaches are obviously better than him?

In regard to those two coaches, you have more questions than answers. George Karl would probably be perfect in OKC, but it’s George Karl. He’d be perfect for a lot of teams. Van Gundy, on the other hand, is a good option, but I find it funny how his name is always thrown out there when a team needs a coach. Van Gundy hasn’t coached since 2007 and hasn’t really shown much of an interest in returning. I’m convinced folks just throw his name out there strictly for shock value at this point. If there is a coaching vacancy, Van Gundy’s name will be rumored.

Which brings me back to the most intriguing part of all this. There is no coaching vacancy in OKC, at least not yet. The reason is, despite all of his faults, Scott Brooks is still a damn good coach. Yes, he lacks creativity in his lineups. His resistance to change is frustrating. Hell, I voiced my concerns on this months ago, so I’m no stranger to this. Still, all things considered, OKC has made it this far under his leadership. I might be in the minority with this opinion, but I believe OKC should follow him down this road just a bit longer. Unless you can actually convince Karl to come to OKC, you have to keep Brooks. There aren’t that many available coaches actually better than him. In fact, the two I named are the only ones realistically, and one of them hasn’t coached in seven years. If you’re not completely sold that whoever you bring in is an upgrade, then you have to keep Brooks.

If there is one thing that Russell Westbrook indeed does better than Durant, it’s his ability to control chaos. Westbrook’s style of play is a natural disaster in the most beautiful of ways. His aggressiveness on the court is one of his better traits, even if the desired results aren’t always there. In the case of Kevin Durant, perhaps it’s time for him to adopt that same demeanor.

Not saying that KD should go full blitzkrieg on the court, but he needs to develop an on and off mentality. Far too many times he’s been the passive one in this relationship. Obviously, as one of the two best basketball players in the world, this approach has worked wonders for KD. Just imagine a world where he is creating nothing but organized chaos when the situation demanded it. A shoot-first style where he is aggressively beating out defenders, in all areas, including in the paint. Then imagine that with a proven efficiency to justify the switch. Organized chaos. He may not have the elite athleticism of Westbrook, but KD still has enough to deliver damage. His finesse style of play is always appreciated, but being able to convert from that into an unstoppable machine would be a skill worth acquiring. Something in the likes of this, even if just a bit tempered. At the least he could be a bit more selfish when needed. That would be a step forward.

Why was the youth movement halted?

OK, I completely understand the over-reliance on Caron Butler and Derek Fisher these past few weeks. I get it. Scott Brooks chose to give extended minutes to veteran players who he could trust. The playoffs are an intense beast, and that’s not a bad strategy. Still, after the first two games of the Western Conference Finals, more of an effort should have been made to transition the younger players. Jeremy Lamb and Perry Jones may not be legit options, but we certainly can’t tell that from how they were used in the playoffs.

Reggie Jackson by all means made his contributions undeniable to the Thunder. Brooks was left with no choice but to allow him to play quality minutes. Lamb and Jones, on the other hand, didn’t quite have that luxury, though their lack of proven time is more a fault of Brooks than their own. Still, when San Antonio was fielding lineups that consisted of Patty Mills, Boris Diaw and Danny Green receiving open looks, something needed to be done. Brooks had run his core players rugged by overextending them throughout the series and shying away from his younger players.

It could be said that part of the reasoning was more personal than strategic. Brooks' job has been speculated to be on the hot seat for most of the playoffs. Choosing not to leave his fate in the hands of the inexperienced is understandable. Even if it was flawed. Game 6 of the WCF went to overtime, and Perry Jones didn’t even sniff the floor. Lamb got a whopping six minutes of action. Make of that what you will.

Derek Fisher is not the answer

This is really a thing. I understand that fans of Fisher love that he provides a great veteran presence to a team like the Thunder. Except anytime you have a team rely on Fisher to play 33 minutes in 2014 for a Game 6, then you have clear issues on that roster. Let the five-time NBA champion ride off into the sunset to coach for Phil Jackson's Knicks. Seriously, no good could come from bringing him back to OKC for another season.

The Thunder have more questions surrounding them than one could possibly answer in one sitting. This summer they will have plenty to think about, but trust and believe, they will not flourish with Derek Fisher.

3 Replies to “Dearly Departed: 5 Thoughts On The Passing Of The Oklahoma City Thunder”