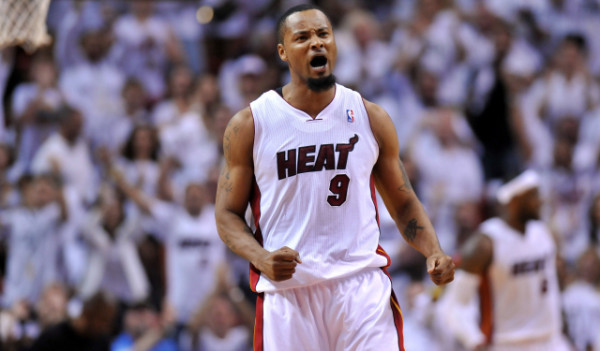 People never get the flowers while they can still smell them. As cliche as that is, it's certainly true, especially when it comes to sports appreciation. This is the social media age, where everything has to be immediate or a player is a bust, and revisionist history has tainted even the greatest of careers. That's why I'm all in on this Rashard Lewis resurgence, even if it is only temporary. The moment he was announced as a starter for the Miami Heat in the NBA Finals, the first thing I thought about were his glory years in Seattle.

Let the record show that fate has a funny way of working. The same day this excellent piece was published by Jonathan Abrams, Lewis was coincidentally inserted into the Miami starting lineup. Of course, all things are possible with the basketball gods, but really Lewis started showing signs of life at some point during the Eastern Conference Finals. What was thought to be just an out-of-the-ordinary good Game 5 has now translated into a string of games that should spark nostalgia in all hoop enthusiasts.

Now before I get ahead of myself, let me be the first to say that I don't see much coming from this. Watching Lewis score 18 points in Game 5 against Indiana was more than enough for me. Despite the loss, if he was to have a 2014 playoff moment, I was fine with letting that be it. He was lights-out, shooting 6-for-9 from the three that night, and suddenly it became clear that he was doing what Shane Battier has failed to do this postseason.

Lewis has dealt with injuries, underachieved at times and ultimately never lived up to his full potential (like so many others). Yet when he was on, you can't tell me he was anything but a force to be reckoned with. With the Miami Heat, he's certainly not the athletic highlight reel that he was in Seattle or the master of space and time that he was in Orlando, but he doesn't need to be. Pat Riley and crew have managed to assemble a particular set of veterans who all provide something to the Heat to complement the Big 3. It's the reason Lewis's role has seemingly increased, in comparison to a 25-year-old Michael Beasley who may never see the floor again.

There has been constant talk of what happens when Tim Duncan walks away from the Spurs or what happens when it's time for Miami's Big 3 to re-up their contracts. Honestly, I'm more concerned with how people will remember the contributions of Rashard Lewis.

He gave the city of Seattle everything he had for as long as he could. He helped put Dwight Howard and an Orlando team in the conversation for Eastern Conference contenders at a time when many never thought he would. In fact, it was at a time when most didn't think he could. That 2009 All-Star nod certainly said otherwise.

The former All-Star will never see the Hall of Fame and might never be placed in a prominent role on a team again, but for those of us who truly remember how good he was, it's been a pleasure. For those who have forgotten, here's a quick reminder.

I don't know how many more meaningful games Lewis has left in him. For this series, he's become the fourth contributor for Miami that they've lacked this entire time. I'd love to see him hit 20+ at least once against the Spurs just for old time's sake.

I'd gladly settle for a poster moment like this though.

The 14-year-old in me will always appreciate Rashard Lewis for what he was, and until this series ends, I'll be rooting for past glory way more than current-day realities.

4 Replies to “The Resurrection: Rashard Lewis And His Long-Awaited Redemption”