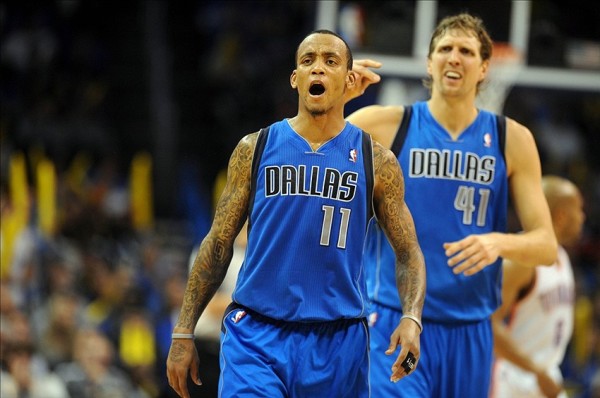 You can say you somebody new, you can give yourself a whole new story, but what came first is who you really are and what happened before is what really happened. -- D'Angelo Barksdale

There is much to be said about the greatness of "The Wire," but if nothing else it shows that everything is all relative. Humans are meant to be complex, as D'Angelo Barksdale demonstrated on numerous occasions in the early years of the series. Here you have a character who ultimately made peace with his own shortcomings and stopped worrying about how others perceived him. Going over this key quote from the second season of "The Wire" instantly made me think of a real-life NBA counterpart. Whereas D'Angelo Barksdale carried a heavy burden over his head, no player has been as unfairly judged as Monta Ellis.

He shoots too much. He's selfish. He's not a team-first kind of guy. These are all criticisms of Ellis that have been made over the years. Some have been justified (he's certainly not the definition of efficient) while others have been unnecessary. Basketball writers and bloggers have made it a habit to go out of their way to bring up his shortcomings at every chance.

Yet this only tells half the story. A rather redundant and misaligned one at that. Monta Ellis is a creative shooter who can score in a variety of ways, and while the shots may not come in the most efficient of ways, you'd be a fool not to appreciate them when they count. It's pretty ironic how so much time is spent overanalyzing the production of Ellis when he's playing at terrible efficiency levels on poor teams, and yet he's rarely acknowledged when he's playing substantially better on a good one.

His ability to operate in a distributive system in itself rebukes many of his criticisms. The Dallas Mavericks under Rick Carlisle have performed under a system that capitalizes off the natural abilities of its players. Dirk Nowitzki has benefited from this, and Shawn Marion along with Vince Carter have most certainly done so. At this point, Monta has clearly adapted well, and it's nothing that should surprise anyone.

That is why the most appealing thing about Monta Ellis to me has always been the thing that he gets chided for most. He's unapologetic. The Dallas Mavericks shooting guard is a polarizing player who could care less what you think. Honestly, Ellis might not have lasted this long if he did. Like his counterpart in "The Wire," he chooses to live and operate in the way that best fits him. In the case of Barksdale, that choice led to an untimely demise, but Monta is still here. He's still thriving and playing arguably the best basketball of his career. While not scoring 25 a night, his 19.4 points per game along with 5.8 assists in the role that he's in is not only impressive, but necessary in the progression of the Mavericks season.

As Kirk Goldsberry brilliantly pointed out earlier in the season, the Monta Ellis playing for Dallas isn't a new and improved model. Though that article was based on a small sample size from the beginning of the season, Ellis hasn't steered too far off course now has he? He's the same player that he has always been. The difference is that Ellis is in better circumstances playing in a system that he's bought in to.

Monta is a player who doesn't let analysts and reporters frustrate him. He continues to play the game the way that he feels he's best at. How he should always play. He takes chances, and makes mistakes, but one could never say that he doesn't leave it all on the court after every game. The risks he takes on the court are a result of a player competing to win. Considering the teams he's played on in Golden State and Milwaukee. Ellis has had to overcompensate on a nightly basis for most of his career. With a change of scenery, his reliance on himself can be eased by his teammates.

Basketball, like other sports, is a game determined by numbers, but it's given statisticians too much room to critique. Contrary to popular belief, using stats without placing them in the proper context isn't just a bad assessment, it's laziness at its best. It's also selectively biased, as some players get crushed in articles for things that others are given frequent passes on. In some ways, it's an act of placing too much emphasis on the numbers, and other ways it's simply writers' inability to relate to the player.

Monta represents the type of athlete that many aren't able to grasp for reasons only they could tell you. He's nonchalant towards those who denounce him. Ellis is far from politically correct and certainly doesn't conform to please those who have no understanding of him regardless. His confidence has at times been labelled as arrogance, which is even further telling of the people who cover him. His style of play is questioned, and yet it's necessary for him to effectively function at this level.

Numbers are great, but it is possible to enjoy and applaud basketball players who are as entertaining as they are talented. There is no rule that the game should be enjoyed less because it's aesthetically more fulfilling than it is efficiently. We thrive to see strong competition combined with even stronger effort. Those who watch strictly to count how often a player isn't going to score as opposed to how he sets himself up to score are as miserable as their assessments.

Of course many will ignore the strides Monta has made this season. As D'Angelo Barksdale pointed out, no matter what a man does, people will always have their own ideas of them. That's why it's only fitting that the shortcomings of Monta's career will always be in the "narrative" background. It serves perfectly when pointing out just how foolish people are when they choose to overlook the man in his present state.

8 Replies to “On Monta Ellis, D'Angelo Barksdale And Accepting Past Perceptions”