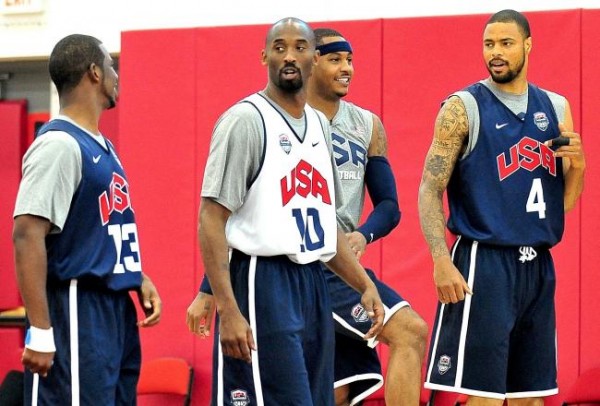 While on vacation this week, the buzz around the condo that I was staying in was about the statements that Kobe Bryant made about the 1992 Dream Team. Yes, Kobe feels the 2012 team is superior, and I blogged about it (inside the numbers) on my personal site because it was intriguing to me. If you are a basketball fan like me, you love it when personal challenges are thrown out there because it gives you an opportunity to compare generations of hoops and how teams would stack up against one another.

There is no mistaking the Jordan era is probably the best the NBA has seen due to the physical nature of the game and the caliber of athletes that flooded the NBA slightly before Jordan and throughout the career of the NBA megastar.

Kobe’s statements confirmed that the Dream Team will be the measure of all National Teams for the rest of the tenure that professionals play basketball in the Olympic games. However, his remarks were really off base and he should have given it some deep thought before speaking publicly about it.

When the buzz peaked, one of my twitter pals Jagadelic threw it out there that the 2012 team would have a problem against the 1992 players that weren’t selected. This intrigued me to the point that I had to put it on paper and pick a team of 12 players that I would have liked to have seen play at that time in their careers.

Let’s start with the point guards. There is no mistaking that Chris Paul and Deron Williams are the benchmark for point guards on this team and in the league today. But how would they stack up against Isaiah Thomas and Tim Hardaway in 1992? Zeke was a terror at the point, and Tim Hardaway was so quick and tough on defense that he made people’s heads swim when he was on the court. Advantage '92 snubs.

When we move over to the hybrids and shooting guards, Russell Westbrook, James Harden and Kobe Bryant are as good as it gets on this roster. However, how would they stack up against Reggie Miller, Mitch Richmond and Reggie Lewis in 1992? Taking into consideration that Kobe is 34 years old now I say not very well even though he is still lethal. I say advantage '92 snubs.

Moving over to the winged assassins at the small forward is where things begin to get interesting. The 2012 team has Lebron James, Kevin Durant, and Andre Igoudala as their wings. These three guys are athletic and probably the best players in the game today. The '92 team isn’t bad either. Dominique Wilkins and his 28 ppg, teaming up with Glen Rice and “Big Game" James Worthy would be explosive as well. However this is where I give the advantage to the 2012 National Team.

When you look at the power forwards, the matchup is pretty close. The 2012 team has Carmelo Anthony and Blake Griffin. The '92 snubs would bring the pain as Larry Johnson and Dennis Rodman would be more than the National Team could handle on the box. Advantage '92 snubs.

At the center position the 2012 team comes to town with Tyson Chandler and Kevin Love. The '92 snubs bring a host of variety as they can go with Shaquille O’Neal and Alonzo Mourning. Both out of college are better than Chandler and Love. Advantage '92 snubs.

When you look at the matchups, it’s clear that the 2012 team is good but the plethora of talent in the NBA during the Jordan era is unmistakably tough to deal with. I will throw a few more names out there that were dominant during that time frame: Brad Daugherty, Pervis Ellison, Danny Manning, Kevin Johnson, Kendall Gill, Joe Dumars, Hersey Hawkins, Chuck Person … I could keep going and going. The NBA isn’t in bad shape now, but it’s not what it used to be.