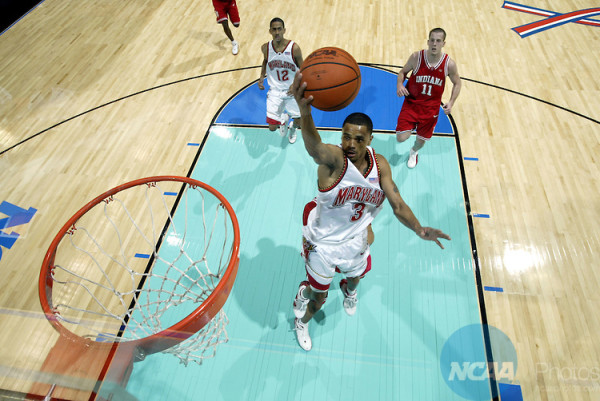 (Ed’s Note: With the NCAA Tournament officially kicking off on March 18th/20th, we here at TSFJ will be giving the people 16(0) sweet words on 16 (bitter)sweet moments of March Madness past. Next up is Jason Clinkscales, as relives the greatness of the Maryland Terrapins from 12 years ago. Oh, and if we go over 160 words…well, our bad.)

In 2002, the long-awaited stranglehold the “Big Four” schools from North Carolina was supposed shake when the Maryland Terrapins won the program’s lone national championship.

Destiny was delayed the year prior when Duke spun the Terps’ 22-point lead into an 11-point win in a Final Four classic. That the Blue Devils were stunned in the Sweet 16 by Indiana meant that the Terps couldn’t avenge the ’01 loss in poetic fashion.

That night, Baltimore’s own Juan Dixon became a demigod. Steve Blake fed the hot hands. Chris Wilcox kicked up his NBA stock alongside Lonny Baxter. The Hoosiers’ heritage was the sacrificial lamb.

This past Saturday in its final regular-season game in the ACC, Maryland went out with a bang with an upset of fifth-ranked Virginia. It doesn’t make up for those “good, but not great” years since 2002, but it was a reminder that this program did what few ever could — got over Duke and North Carolina.