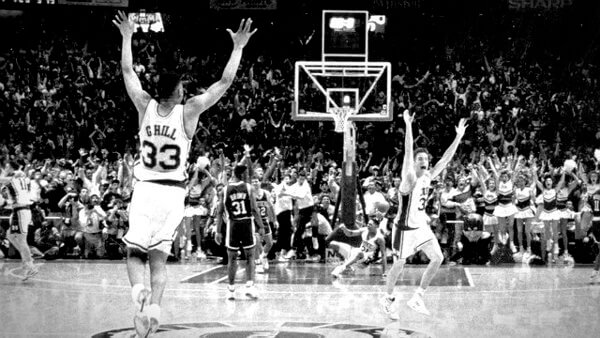 (Ed’s Note: With the NCAA Tournament officially kicking off on March 18th 20th, we here at TSFJ will be giving the people 16(0) sweet words on 16 (bitter)sweet moments of March Madness past. Next up is Bryan Crawford on how he began to hate Duke. Oh, and if we go over 160 words…well, our bad.)

Although it doesn’t seem that way anymore, Duke University spent more than 20 years as arguably the most hated basketball program in the country. Most people don’t know that the real hatred for Duke began when they beat Larry Johnson and ‘nem for the title in 1991. But it was cemented a year later in what some call the greatest game ever played in the NCAA Tournament.

That’s when it began for me. At the very moment when Christian Laettner stomped on the chest of Aminu Timberlake.

Jamal Mashburn and Travis Ford were two of my favorite college players at the time, and the reason I’m a Kentucky fan to this day. You’d be hard pressed to find a pair of teammates who could shoot the rock like them. So you can only imagine after the stomp how bad I wanted UK to knock-off the squad that, as I said before, had beat Larry Johnson and ‘nem. So when Grant Hill threw the pass to Laettner and hit the turnaround jumper at the buzzer for Johnny Ballgame, it’s been Duck Fuke ever since.

(Ed's Note, Part II: Chance are, Kentucky fans are still mad at this 22 years after the fact. I personally know a few fans of Big Blue Nation who checked the college basketball odds and put their bottom dollar down on the Wildcats winning this game against Duke. Yep, I'd probably be mad for 22 years too if I were them.)

Related: Derrick Williams Got Traded Today, So Let’s Reminisce Back To When He Single-Handedly Destroyed Duke