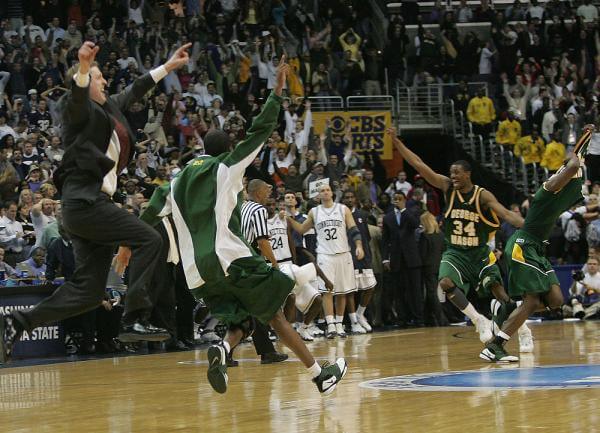 (Ed’s Note: With the NCAA Tournament officially kicking off on March 18th/20th, we here at TSFJ will be giving the people 16(0) sweet words on 16 (bitter)sweet moments of March Last up is Mark Trible, as the Virginia native closes the show reppin' for one of the best Cinderellas ever. Oh, and if we go over 160 words…well, our bad.)

I’m an emotional being. I’m a sports fan. Down the line, a few NCAA Tournament moments have brought me to tears. There’s no sense denying it.

A few of my moments were scooped by fellow TSFJers, which shows we have the best staff in the world.

For me, there’s still one tearjerker left – George Mason over Connecticut in the 2006 regional final.

Mason is a commuter school about 20 miles up the road from me in Northern Virginia.  It's a place high school classmates attended when they wanted to live at home and go to school. As a proud mid-major fan who roots for all things CAA, I could believe they made it as far as they did.

But, the buck certainly had to stop with a team stacked full of NBA draft picks. It didn’t.

What made things even more impressive was the fact the Patriots blew the lead and still managed to win in overtime. Normally, overtime is where upsets go to die.

When Denham Brown’s winning 3-point try missed the hoop, the pro-Mason crowd in D.C. lost their minds. I lost mine too in addition to the dryness of my ducts.

With that, enjoy March Madness. May the tears find your cheeks soon.