There are some things that as soon as you see it, you immediately lose your mind. When Phillip Barnett dropped by in the TSFJ e-offices with a gift, I immediately assumed trickery. The man never brings gifts; usually, he only brings his Los Angeles Lakers fandom and San Francisco Giants stress. I have time for neither. And then the man put this in front of us.

What ensues by clicking that link is a jump into the time machine 25 years ago, as modern artistry takes a turn at the legendary NBA Hoops basketball card set of 1989. The '89 NBA Hoops collection was actually licensed by the NBA and was one of the first cardbox sets I actually purchased. (Okay, that's a lie. I was 6, so my Aunt Monica dropped $50 for this on my birthday.) Matthew Hollister, an illustrator from Seattle, has vowed to create a portrait for every player in the NBA. What's the inspiration? Peer pressure from a friend.

I can't really say I was "inspired." I had created a few basketball-themed projects just for fun, contributed to the Hardwood Paroxysm preview last season, and illustrated a Blazers feature in Portland Monthly featuring some card illustrations. A friend of mine said, "You should just draw every player in the league and print it out in a huge sheet." We both kind of laughed it off, and then the bug was planted and I couldn't stop thinking about it for a few weeks. Once I sat down and figured out a template for the card, and drew the first few players ... it was just on. I couldn't stop, and now I'm fighting my way through it. -- Hollister

Currently, you can alphabetically visualize every player from Quincy Acy to Tyler Hansbrough, but you'll have to wait a bit to see the visual greatness of Cody and Tyler Zeller. For Hollister, he says that every card is fun for him to make. From the stars to a totally random player, they're all just as fun.

Be sure to check out the online store, as you can also get prints and canvas art to hang up on your wall. I'm probably going to purchase the Chris Bosh one just for comedic purposes alone. Here in the TSFJ e-offices, we picked 10 of our favorite pieces that Hollister's created thus far. Enjoy the visual greatness. 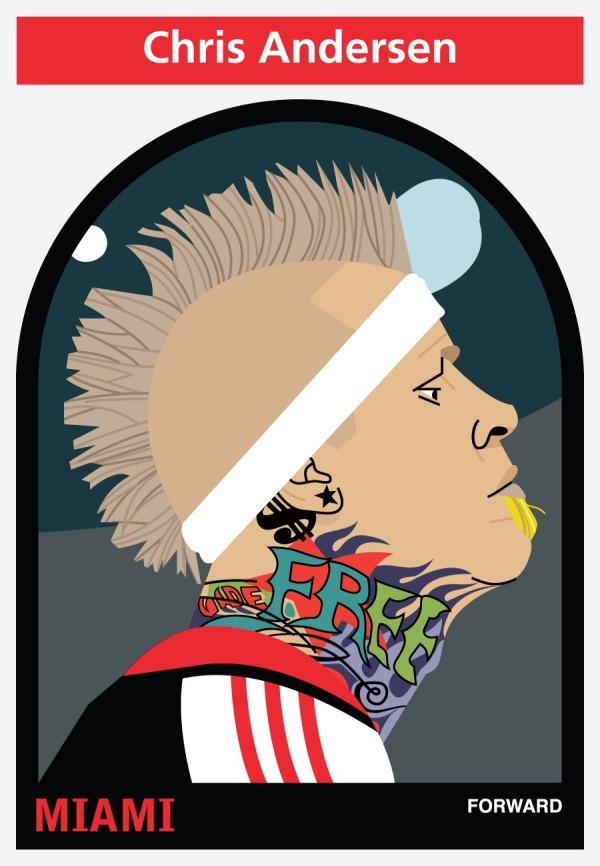 We love Chris Andersen here at TSFJ, and there is nothing but absolute epic-ness in this photo. The neck tattoo, the soul patch, the headband, the hair, the moon in the top left corner, the other ill-shaped moon in the top right corner, everything. Although Birdman looks sad, like he knows nothing will ever be the same in Miami after #6 took his talents back home to wear #23 again. But hey, I bet that means Birdman can shoot more threes, right? Right. -- ETSF 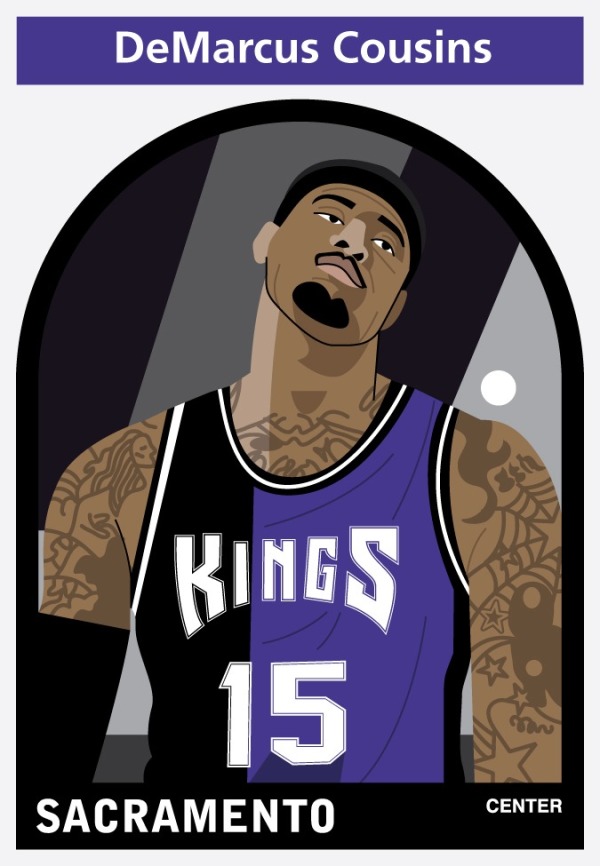 This is DeMarcus Cousins. And right now, he doesn’t give a (modicum of concern). -- Clinkscales 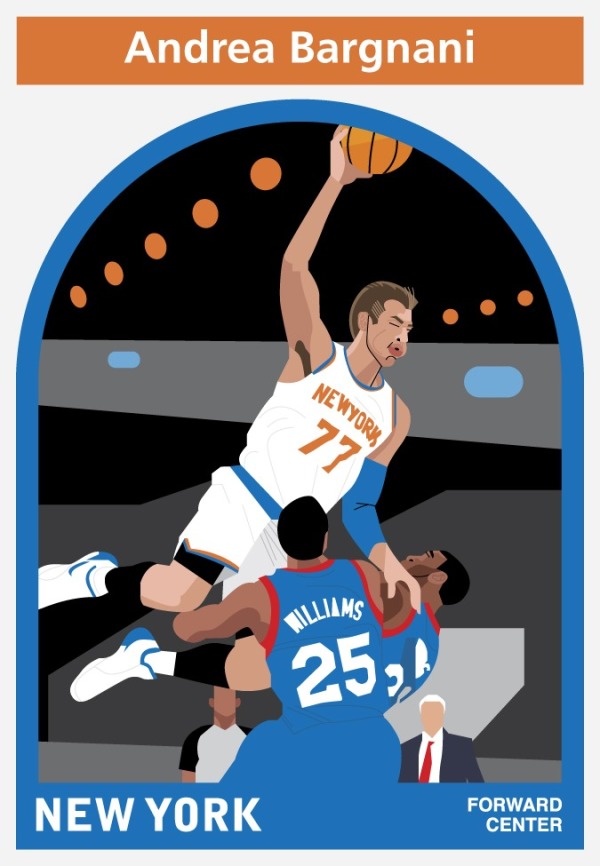 Look at this insane illustration of Andrea Bargnani. He looks like Rik Smits doing the "Flying Dutchman"  in the EA Sports' video game Bulls vs. Blazers and the NBA Playoffs. Of course, that dunk in the game was really cool. We also know that there's no chance in hell Bargnani would make this dunk ever in life. The artist even closed Bargnani's eyes, because of course Bargnani plays basketball with his eyes closed. It explains so much. -- ETSF 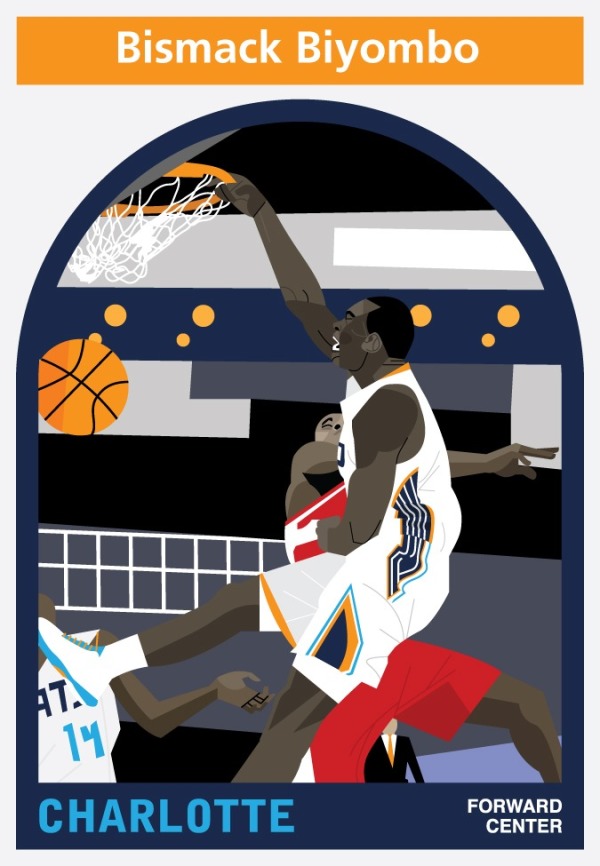 Bismack Biyombo is not so much a basketball player as he is an idea of what a basketball player should look like. He's big — really big. He's athletic — really athletic. But he can't actually do much of anything with the actual basketball in his hands. Well, except for what you see here, dunk. And finally, after two years of the big forward inexplicably shooting below 50% from the field, Bismack hung around the basket, dunked on some fools, grabbed some boards and blocked some shots last season — you know, all the stuff guys who look like basketball players but really aren't can still do. I like to imagine Bismack screaming, "BIYOMBO!!!!" every time he yams on someone. If he doesn't, he certainly should. -- The Rev 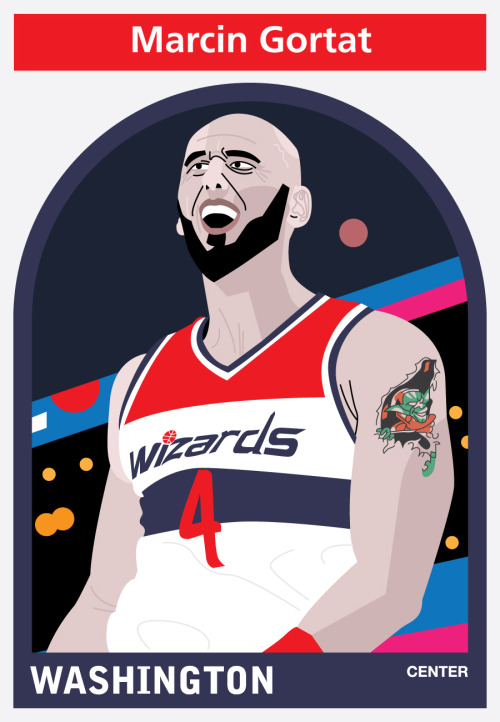 Cast your eyes upon the Polish Hammer, Marcin Gortat, and marvel at one third of the Washington Wizards' insanely fun trio. No, seriously, just look at him. He looks like an actual wizard with some kind of demon lizard gremlin clawing out of his arm! Now imagine this 7-foot, bearded and mohawked mountain of musculature screaming quotes from "300" at you before you go play basketball. If you aren't sitting in a puddle of your own bodily fluids right now, you're a bigger man than I. -- Carden 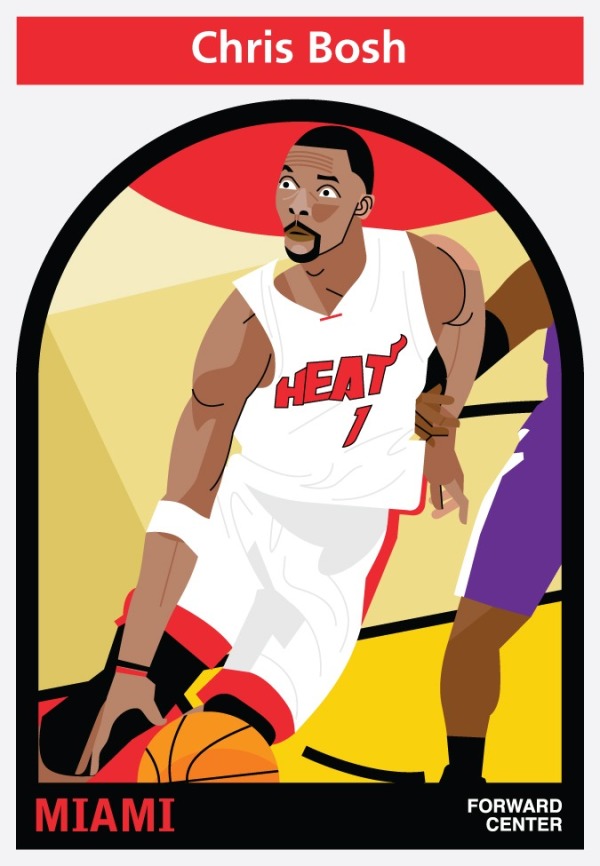 I mean … what more really needs to be said? All hail Christopher Wesson Bosh. -- ETSF 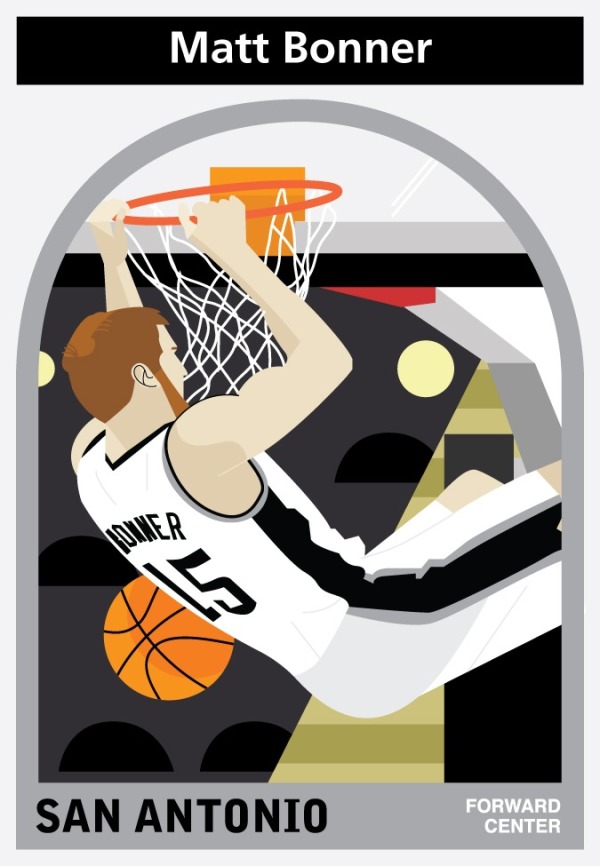 Matt Bonner is a two-time champ who has been in the league since 2004 and with the Spurs since 2006. Also, his face isn't in the illustration. You could argue that this picture captures the essence of the Spurs — it's never about the face; it's about the action. You could also argue that this picture is inaccurate because he's dunking. Who the hell knows if he can dunk? There is a lesson here, though: If you're seven feet tall and remotely athletic, you can have a plenty long career in the NBA. -- Carden

If you wait for it, it will come. IT'S A GIF! But man, this has to be the saddest thing anyone's ever created, and yet it's still very brilliant. Not only is it a reminder that Kevin Durant's gone until probably 2015, but then we have this subtle reminder of what used to be and what could've been in the Pacific Northwest. I loved the Sonics as a kid, and seeing KD in the green and gold will always make me sad a bit, even if it meant that my home state finally got a professional team. -- ETSF 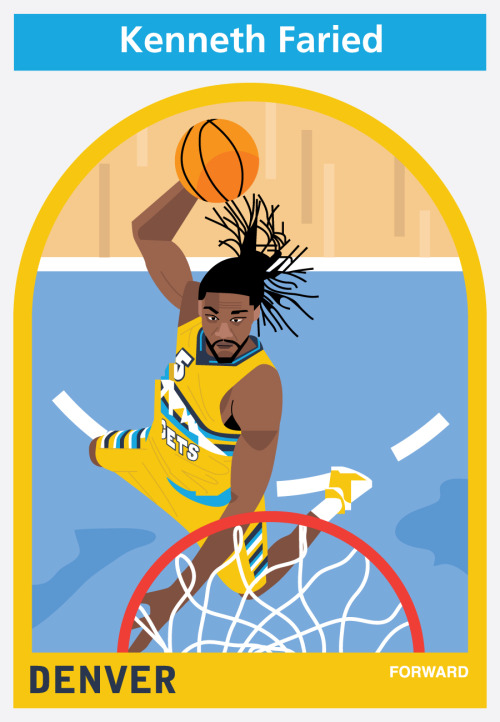 Kenneth Faried was put on this earth to dunk. It's just what he should be doing all the time. This is him in his natural habitat, flying toward the hoop, eyes fixed on the rim with the ball cocked back for extra style. Even his hair is made for dunking — flying all over the place for style points. Kenneth Faried isn't the greatest of power forwards in this league, but when he can dunk like this, frankly, who gives a damn?  -- Carden 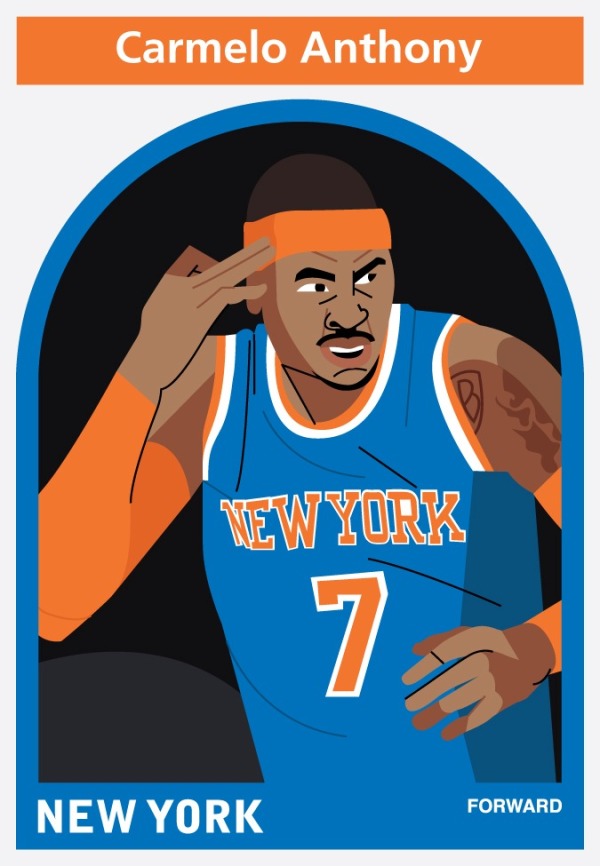 Look at Carmelo. The man is putting a three-gun to his head. Only Russell Westbrook does this more often than Carmelo. It is amazing every time I see them do this. Also, I'm pretty sure there will be times this season that Carmelo will look at his team and want to shoot himself in the head. Look at the Knicks' depth chart this season. Now realize that Carmelo just might be the best defender in their starting lineup. His head coach, Derek Fisher, has coached as many games in the NBA as Carmelo has. Oh, and J.R. Smith, the only other player on the entire roster who can score, actually uttered these words when asked about adjusting to Phil Jackson's triangle offense:

"Trying to think about the rest of the team over myself or my scoring is something that I never really had to do before." -- Earl Smith III

Anyway, let's pray for Carmelo man. Don't shoot yourself in the head, bruh. Don't do it. -- ETSF