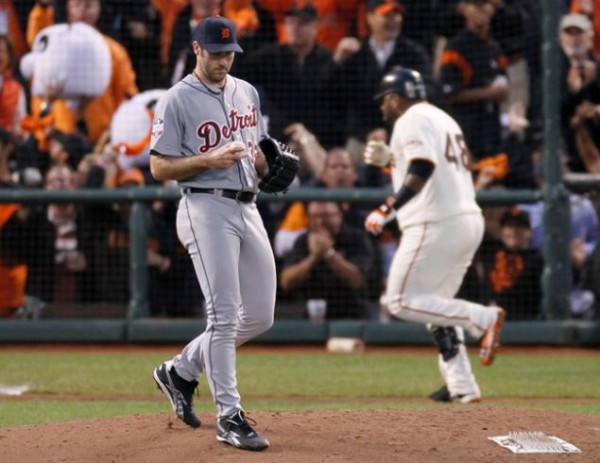 Momentum has been the theme, and if it hadn’t reared its truth before, last night in San Francisco it yelled its prophecy in every way possible. This year’s World Series pits two clubs that bludgeoned their opponents into submission in their respective League Championship Series and now have run into each other full speed.

Both teams took on legend headfirst and humbled it. The Giants hawked the defending champion St. Louis Cardinals off a three-game perch, both in St. Louis and at home. In the process, they revealed  a fighting spirit that is still very much alive. Meanwhile, the Tigers perhaps may have finished their business a bit too well. They became the first club to broom the Yankees out of a season in over 30 years, and in the process sat idle while they awaited their next opponent to earn its way to the Series.

But as all things do, something has to give and something has to get, and if game 1 of this year’s Fall Classic is the real forecast of things to be, the warpath from the west may be too much to stand. Can the Giants keep up this pace indefinitely? Will the Tigers' layoff feed their strength reserves or thieve the ever-so-valuable gift of momentum from them?

So in this first edition of the final stage of the TSFJ MLB Playoff Momentum Meter, we’ll look at what’s happened thus far … and what’s to be in the next six (at best) games of the 2012 baseball campaign.

1. San Francisco Giants (obviously): The San Fran run is undeniable. After winning three straight games to win their first two playoff series after trailing, they finally have their first lead in a series this October. And they did so in slightly impressive fashion … ONLY beating the best pitcher of his generation, Justin Verlander, to do so. And they beat him worse than he had been subjected to in the last three years. While Pablo “Powered Up Panda” Sandoval won’t be hitting three home runs per game, the Giants are the type of team that builds around a strong performance from any player, at any time. Basically, they are the ultimate opportunists and the most unpredictably successful team in many years.

How to keep the ball rolling: Ride the wave of the environment. The San Francisco fans are as big of a factor as nearly any player on the field. Instead of the team giving the cues to crowd, it seems to be the opposite. The team is thriving at home and has to win out to gain momentum.

2. Detroit Tigers (also obviously): They entered the series as the unstoppable force, sweeping the Yankees away after forcing the toughest out in the season’s final month, the Oakland A’s, as well. They sent the soon-to-be consecutive winner of the AL Cy Young Award to the mound to stop the Giants, only to see him turned back like he was a rookie trying to make his first club. Their bats went cold and couldn’t counterpunch the Giant onslaught until it was well out of hand. All of this happened at the hands of a substitute starter in Barry Zito, and the top tier of the Giants rotation still waiting in the wings.

How to get the ball rolling: Wake up and move on. While the shock of Verlander failing is real, he’s far from the only gun the Tigers have. Doug Fister has been tough, and is the perfect type of pitcher to derail the Giants attack. He gives them the advantage over the struggling Madison Bumgarner in game 2 and a chance to steal home-field advantage back, even after the statement that was issued from game 1’s mastery from the complete Giants team.

One thing is for certain: The road to Commissioner’s Trophy will be a varied one. The Giants don’t have an inch of quit in them, while the Tigers have shown the resolve to win any kind of series as well. But for now, the Momentum Gods are smiling down on San Francisco like the Giants are their 25 first-born sons. Don’t sleep though … in either city.