We’re officially through the first month of games in the Major League Baseball season, and what a silly month it was. The Cubs are as good as expected, but the Phillies are also better than the Astros. Wacky. The early season is also fun because the sample sizes are still small so early season hot streaks look like possible breakout seasons.

In the early going, there are several players we expected to have MVP-like seasons who are doing just that. However, there are also some guys sneaking in who may or may not belong. So of the early (too early) MLB MVP front-runners in each league, which ones will stick around for the long haul and which ones will succumb to the dreaded regression? Let's take a look. 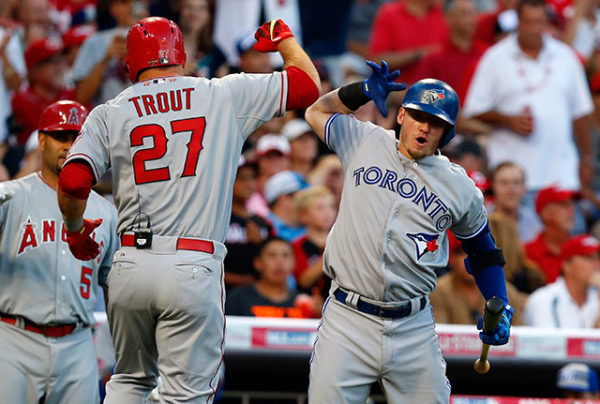 It should come as no surprise that Manny Machado finds himself in the midst of MVP discussions. He is arguably the best third baseman in baseball and a name some bring up when discussing the game’s very best players.

While continuing to be a defensive maestro at the hot corner, Machado has built on last season's breakout performance. Through the first month-plus of play, Machado is slashing .350/.403/.691 with nine home runs while logging a 2.5 WAR to lead the league.

Machado is hitting the crap out of the ball this season with a hard contact rate six points above his career average. This is a product of his growth as a hitter and is a trend that will likely continue. As he keeps piling up offensive numbers, don’t expect Machado’s name to slide from the MVP discussion anytime soon.

After a slow first couple weeks, Mike Trout is right back to his old ways of being the best baseball player on the planet. His .313/.398/.565 slash alongside his seven homers is even more impressive when you consider his .185/.303/.333 and one home run on April 13.

There’s not much else to say about Trout. He’s just going about his business, mashing baseballs and effortlessly getting to everything in the outfield. He has been in every MVP discussion since his rookie year, and that’s going to continue as long as he’s around.

The reigning AL MVP is back at it again. He’s launched a league-leading nine home runs, he’s scored 30 runs and he continues to pulverize just about every ball he makes contact with. Of his 33 hits, 18 have been for extra bases, a quarter of the fly balls he hits go over the fence and his 46 percent hard contact rate is nine points above his career-high 37 percent last year.

Donaldson can flat-out rake. His absurd hard contact rate may dip some, and some of his fly balls may turn into outs as a result, but that won’t have that much of an impact on his MVP candidacy. Given his ballpark and the lineup he plays with, his numbers will continue to jump off of the stat sheet all season, and talk of back-to-back MVP awards for the slugger will be prevalent all year.

Altuve has been a monster through the first month of the season. His slash numbers are all right around his career marks with the exception of his slugging percentage, which is an astronomical .659. His career slugging is .425.

The Astros’ diminutive second baseman has pounded out 40 hits this year, and a whopping 23 of them have been of the extra-base variety (14 doubles and nine home runs). This trend is not likely to continue for Altuve, who has seen 26.7 percent of his fly balls leave the yard. By comparison, his career high was 7.4 percent a year ago.

That’s not an upward trend — it's an anomaly. Anomalies are fun, but they’re sure to fade as the season wears on. At some point, Altuve’s fly balls will turn into outs at a much higher rate, and we’ll see his power numbers decrease, along with his overall production.

This is not a knock on Altuve as a player. He’s exceptional and one of the very best second basemen the league has to offer. The “best second baseman” label will stick. The MVP candidacy will more than likely wear off as we enter the summer months. 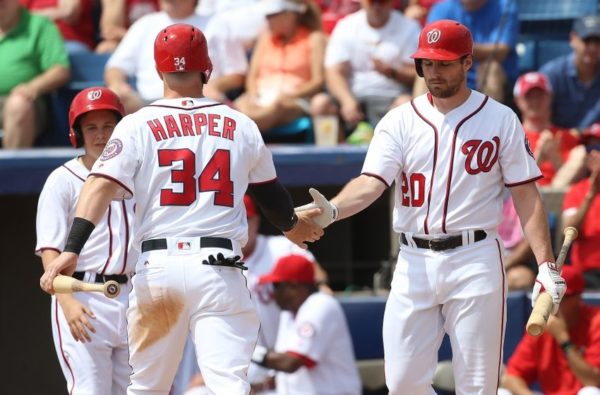 After his start that would make the sun sweat, Bryce Harper has cooled off significantly. His numbers through one month don’t really jump out with the exception of his 10 homers, which are second only to Nolan Arenado.

On the strength of his first couple weeks alone, the reigning NL MVP finds himself in early talks to repeat. We’ve seen the very best Harper has to offer, and after a full season of it last year and a good run early this season, there’s reason to believe he’ll begin offering it again.

When looking into his current slump, you'll find that Bryce with the good hair has been extremely unlucky. He's not getting very many hittable pitches, and a lot of the balls he put in play for hits last year have been outs this year. As the season progresses and he continues to be the outstanding hitter that he is, the law of averages will kick in, the outs will turn to hits and his numbers will start to creep back up. The Bryce Harper MVP train, while momentarily slowed, won’t be derailed over the next six months.

The Cubs weren’t expected to be able to re-sign Dexter Fowler after their acquisition of Jason Heyward in the offseason. Lo and behold, they not only got Fowler back, but he’s been arguably the best player in baseball through the first month.

Fowler is slashing .340/.462/.575 while smacking 12 doubles with three home runs. He’s also walked 21 times against 26 strikeouts. He’s been extremely efficient for the Cubs and is a huge reason they’re the best team in the league.

That being said, his numbers will surely experience a pretty dramatic decline. For starters, he’s currently sporting a .423 BABIP. The inflated BABIP has led to his increased average and on-base percentage. As he cools off and gets bit by the dreaded BABIP monster, Fowler will come back down to earth statistically. As of now, Fowler very much deserves a place in the discussion for the league’s most valuable player. While a couple of his teammates may find their way into the conversation, Fowler will inevitably fall out of it.

There’s a tendency to qualify Nolan Arenado’s numbers with “well, he plays at Coors Field.” It’s becoming more apparent every time Arenado puts a ball in orbit or makes a highlight-reel play at third base that the kid can flat-out ball.

Perhaps the most impressive part of Arenado’s season outside of his 12 home runs, which lead all of baseball, is his evolution as a hitter. He’s walked as often as he’s struck out this year. A season ago, he K’d more than three times as much as he walked. While voters aren’t going to look at these numbers at any point, the numbers do indicate his growth as a hitter.

It’s more than likely his .322/.397/.686 slash line will stick around as the home runs continue to fly out of ballparks. His approach has been excellent this season, and your approach travels with you ballpark to ballpark. Some may write his MVP candidacy off because of Coors Field, but if Arenado continues to put up these kinds of numbers (last year gives a good indication he can), and if the Rockies somehow find their way on top of the messy NL West, Arenado will be impossible to ignore for MVP voters.

Daniel Murphy’s start defies all logic. The Nationals’ new second baseman has made one hell of a first impression. Murphy, the 2015 NLCS hero, has posted a .395 average for the first month with four long balls.

Murphy has always been a fine hitter, but .395 is asinine. Unlike Harper — who is having difficulty finding a hit anywhere — Murphy is hitting baseballs into an ocean right now. It's been a marvel. Seemingly everything Murphy hits finds a gap, and his numbers reflect that trend in spades.

A quick look at Murphy’s career numbers give a better indicator of where his numbers will trend. With a career .292 average and .335 on-base percentage, it’s doubtful that the always steady Murphy suddenly becomes an MVP-winning superstar, especially at 31 years old. He is helping carry the Nationals at the moment, but Bryce Harper is the only player in the nation’s capital that’ll be in the MVP discussion at the end of the season.