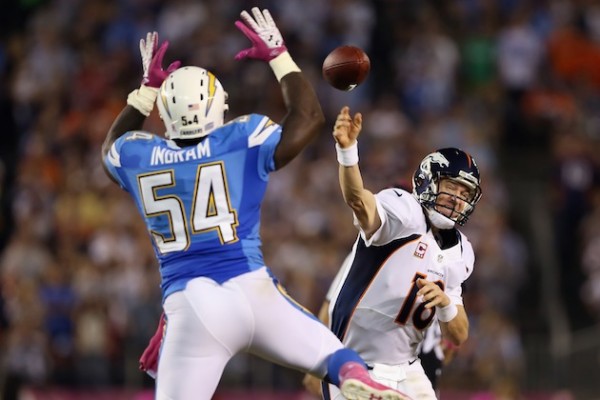 Peyton Manning isn't the same quarterback he was when his Indianapolis Colts won the Super Bowl.

Take a look in the mirror and tell me if you're the same person you were when he accomplished that.

Time has moved on, and we're in another decade. It's funny how fast the minutes turn into days and those days turn into months. Before we know it, the calendar has turned to the next 20-something.

Manning's changes have been well-documented. In what seems like a week-by-week evaluation of the quarterback's staying power, he's in the black for 12 days. That's when Denver hosts New Orleans on NBC's Sunday Night Football.

It was akin to his fantastic comeback against Tampa Bay in 2003. Manning simply caught fire. The Broncos defense followed his lead and turned Philip Rivers into another punchline.

Agony for the Chargers and their fans. Unexciting for the anti-Manning crowd.

The nostalgic sports fan could find comfort in Manning's performance.

In the past weekend, the sports-viewing public saw the New York Yankees play a postseason game without Derek Jeter. They watched the 38-year-old shortstop tumble to the ground in pain in Saturday's 12-inning thriller.

Sunday, the centerpiece of the Baltimore Ravens defense might have played his last snap. Linebacker Ray Lewis - another seemingly ageless athlete - tore his right triceps muscle.

Out for the season. Quite possibly out for his career.

For those of you old enough to not "get" Justin Bieber, two iconic players forced you to think about your age.

Manning seemed like he was the third of the triumvirate to go down in as many days. In the first half, he was much less than remarkable. The neck, the new team and the game had spelled his defeat.

For nostalgia's sake, Manning reminded us that he's still got something left.

At some point, we all talk to our fathers, uncles and grandfathers about the players we never saw. The stories are grandiosity overload. A role player turns into a favorite who turns into an unforgettable memory.

There are the icons. The Mickey Mantles. The Jim Browns. The Doctor J's.

The icons, who feel like players filling musty jerseys in places long and far away, seem impossible to grasp in youth. Every story about Willie Mays' ability to use all five tools seems exhausted.

After a while, each tale of Sandy Koufax's fastball is met with an eye roll. The memories of Bart Starr and the Ice Bowl that are recounted feel a bit oversold.

Yet, we move on with those things in mind. As we come to watch our first generations of players, we remember their skills for more than what they actually were.

It's easy to get wrapped up in our athletes today. We don't have to go very far into our minds to realize who we'll remember. Our group knows what players will be relayed to the next generation.

Someday, that day will come. We'll tell our kids that the new shortstop for the Yankees is no Derek Jeter. When the grandchildren ask us to watch their favorite NFL defender, we might look at the youth and chuckle. It won't be hard for us to tell them that he's no Ray Lewis.

Down the road, a quarterback will bring his team back to win like Manning did Monday night. It won't be Manning.

It's still comforting to see something remain usual. It reminds us that we still have a bit of the generation left. We can wait a few more days before creating legacies for them. It's not yet time to go back in time; it's still in front of us.

The years will fly by quicker than San Diego's 24-point lead. We'll wish we had it back.

So, yes. Manning is getting older. Then again, so are we.