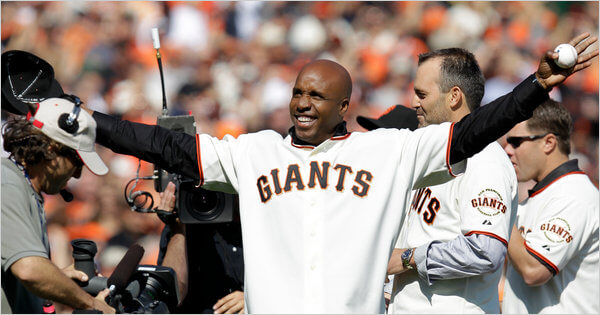 It’s storm season, and a familiar forecast is on the horizon. Barry Bonds is looking for a way back into baseball. Now stop for a second and think about that: how oddly correct it is…because he never really was officially kicked out. But in all truth, the all-time home run king was all but thrown out the Major Leagues with a style that only Uncle Phil and Jazz could really appreciate. Since the end of 2007 when he became an unceremoniously unoffered free agent, despite coming off a season that was still far from the norm of an average ballplayer, there’s always been an air of excommunication around Bonds and the MLB.

Now he’s looking to rebuild the bridge that was broken apart while he was standing on it. With the meat of his legal trials for obstruction of justice behind him, he’s looking to repair his place in baseball; a place that is one of the most enigmatic of any ever established in sports, overall.

It is truly an amazingly complicated scenario. Despite never being charged with violating the policy, Bonds sits at the head of the “guilty by public opinion” table of steroids violators from the last decade of baseball. This is an era that has had ramifications of the past, present and immediate future. Perhaps more than anybody else, Bonds has been the most hotly pursued of all, because he was the game’s ultimate villain, and has kept the role long after he took his elbow armor off for the last time. Not since Ty Cobb nearly 100 years before him had a player been so seemingly universally loathed, yet undeniably dominant. Despite always being one of the best players in the game since first arriving, he went on a tear like no other player in history, and took the record book by its throat. While many other alleged, and revealed, performance enhancement users fell by the wayside over time, Bonds pushed on higher and higher.

When he toppled the all-time home run record that Hank Aaron so proudly held, it was the final straw. There was no way to politically strike him from the history of the game, so instead when his contract ended, there seemed to be a general consensus amongst those in control of issuing new contracts to stop him the only way they could: by not offering him a deal. That left him with nowhere to go, as well as opened him up to investigation. Once the law got a hold of him, it would eat up any chance of him continuing to have his way with Major League Baseball, and the PR nightmare his existence, and often attitude, wreaked on it.

Well, the plan worked, and he was gone. But just when they thought he was out he PULLED himself back in. See, Barry knows what time is coming up. He hasn’t played in five years, and while he hasn’t filed as retired yet, it’s about time for the Hall of Fame to come into play soon. He’s got to get his never-very-good image back in shape. So he’s looking to get involved with the San Francisco Giants again, an organization that is probably the only outpost that hasn’t turned its back on him yet…is waiting too.

Herein lays probably the biggest fiasco ever seen around to hallowed, yet sometimes controversial, Hall. Major League Baseball never suspended Barry Bonds and the Baseball Hall of Fame is not conducted by the MLB. Yet its voters (the Baseball Writers of America, that have no connection to the MLB or the Hall technically, as well as its members, that definitely want to preserve their legacy by association) have regularly condemned any admitted steroid users and kept them out of its ranks.

Bonds however is bringing back all the same circus of opinion around him that he left the game with in 2008. He’s also bringing a résumé to the forefront of the Hall’s stand on presumptive guilt like no one else ever has. It’s about to get really serious, really quick, and Barry's re-emergence on the scene starts back up a ton of questions that have no precedence for an answer.

So what if the Giants do take Barry back in an official capacity, whether it is spokesman or even on as an actual coach? Is this a sign that he is once again accepted in MLB circles? Is this something that Bud Selig’s office would stand for, especially after what it represents so decisively forced him into exile before? Would this acceptance help to ease the view of him at all? With Barry, it’s never been and never will be simple. It could be another way for him to get visibility in the crucial years leading into the most contentious Hall of Fame vote ever. Who knows until it happens. But whatever does, one thing is for certain, among all the records he holds, Barry’s still in his prime as baseball’s greatest lightning rod ever.

10 Replies to “The Quiet Storm Is Over: Barry Bonds Is Back”