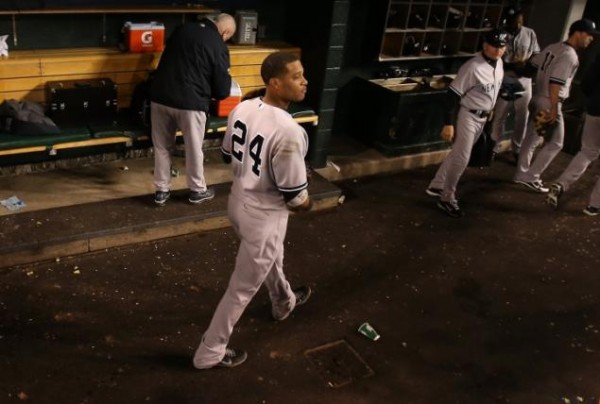 The worst thing that could have possibly happened to the New York Yankees was to keep winning. You’re always in it to compete and take the year as far as it can go, but in the case of these Yanks, it’s like the dog that should have been put down only the owners don’t know when to say when. This is a team that’s clearly been around for too long and is taking the marathon beating route out of the season.

After being chased from April all the way to the edge of the playoffs by the Baltimore Orioles, they caught haymakers from the Detroit Tigers, who have become potent knockout artists over the last month of the season. They dropped the first two games of the ALCS without even facing Justin Verlander yet, and what’s worse is that when it’s the Yankees, the struggles are going to be magnified and spotlighted brighter than ever. Verlander delivered a dominant performance. Then two days later even CC Sabathia couldn’t counter the blows being dealt, and the franchise was swept out of the playoffs for the first time since 1980.

The game’s most notable franchise never once felt in control of its destiny for the latter half of the year. The Yankees were on their heels for months, until finally they got their legs taken out. And when a scenario plays out like that, the success of the year is null and void; there are questions that need answering. The answer is clear, but the process isn’t. No matter what happens from here on, the Yankees have to rebuild.

“Rebuild” is one of the most dreaded words in sports. It’s code for a turning tide and giving up. In baseball, it’s an all-out yard sale, the type that the Houston Astros redefined this summer. Trading in every bit of competitive, well-paid talent in exchange for the potential, that big-talent, low-experience minor leaguers offer. It’s the ultimate admission of defeat, usually.

However, in some places that’s the road not only less traveled, but unpaved. Chief among those locales is the Bronx, where the biggest mint in all of sports funds what is the most expensive roster in the game annually, designed to keep up the Yankee standard of not only competing, but winning it all every year.

But reality has to set in, and it came crashing down like an imaginary chandelier that sits over Yankee Stadium. This is really the third year in a row that the club has imploded in the postseason, while still allocating the most towards success. That means it’s time to identify problems and change what can be adjusted. But this team isn’t constructed just like any other squad. It's jam-packed with massive contracts that wouldn’t be assumed anywhere else.

There is a near crisis with the status quo, but the dilemma is there’s no one problem to put a finger on. Rather, it’s a complicated issue of several holes needing to be plugged at once. How can you fix severe age, health and, surprisingly, budget problems all in a few months? The answer is you can’t, but in the Bronx it won't only be expected, it will be demanded. In the case of the Yankees, you have to feed the zoo of beasts that were self-created in order to move ahead.

There are the injuries to Derek Jeter and Mariano Rivera, both still under contract and leaned on to be important contributors next season.

There’s the matter of tying up Robinson Cano and Curtis Granderson to contracts over the next year to keep them in town, two matters that aren’t particularly optional.

There’s the ever-present issue of constructing a solid pitching staff for the four days that CC Sabathia isn't on the mound, a staff that isn’t ridden with castoffs and one-year patch projects.

The sins of your past will have to have their penance paid eventually. From day one, Alex Rodriguez’s contract was both a bad idea and a forced issue. Now halfway through that pact, there’s the most extreme talk of him having played his last days in New York. I know the Red Sox/Dodgers deal made it seem like it was easy to just dump large salaries for resets, but in this case that’s plain not happening. Rodriguez is 37 years old, has two feet and a knee into not even needing to pack a glove for spring training anymore, and is struggling to hit above-average fastballs from the long list of anybody that has one. That doesn’t sound like a National League guy, nor the type of DH that makes more differences than ground outs. Toss in the fact he’s got $100 million left on a contract that runs through his 41st birthday and a fan base that wouldn’t care if he saw his 38th, and you’ve got a plethora of problems that are unique to this club alone.

This is one problem that won’t be getting shipped away easily… and is projecting like the most controversial number six hitter ever over the next few years, which will be spent as a Yankee.

This is a lot to digest, and in the end there are a few facts to face. They can get younger, but it won’t be a fast process. There’s too many unmovable contracts holding the age factor in place, and the money will always play first. So settle in Yankees, both fans and players; this cloud currently cast over the 2012 club doesn’t show any signs of letting up anytime soon.