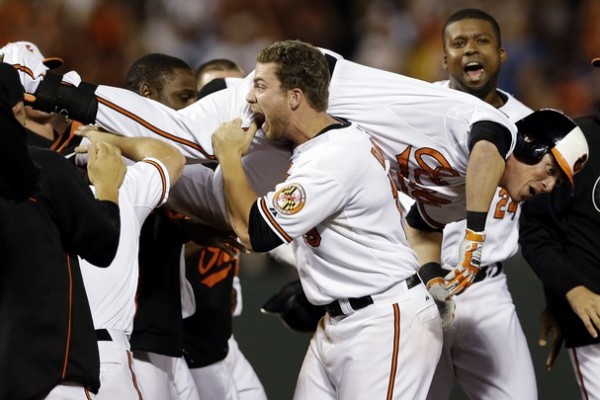 Some folks are calling it magic, while others are going with momentum. I’m going to take it to an even higher plane: I’m taking it to divine intervention of the Field of Dreams variety. The Baltimore Orioles have been made to suffer for a long time by the Baseball Gods, but now, as they always do, they have turned their favor towards them again and now there is the ultimate TEAM that is not-so-quietly playing party crasher in the most.

The odds are you know the name, know the hat and definitely know the city. However, the reason why these Orioles are the best story in the game this year is that they are the ultimate underdog made over. And not for the traditional underdog reasons like they’re beating teams that have a lot more money than them or chasing impossible odds to make a miraculous comeback. They have risen to the top of the American League's toughest division via true grit.

Neither of those dogs hunt, because the O’s have money, always have, which was the problem for a long time. It’s just that it never paid back once it was handed out. They’ve been buried under a mountain of bad investments for years, in a division where mistakes can’t ride. They became a franchise that was just shadows of what was and slumped in the second longest seasonal losing streak in the game. The shadows of Ripken, Brooks and Palmer loomed larger and larger, and it seemed more and more that stories of their heroics would be all that Baltimore fan would have to lean on.

But then that day came, and it’s been a freight train through the Yankee-Red Sox-Ray status quo. And all of those clubs are struggling to even hold on to the sides of it. September is half way over, and they are setting the curve atop the East still. Hanging on for a Wild Card isn’t the goal anymore, taking the crown is.

But when a team picks up steam like this, the natural tendency is to be skeptical of it, because it’s so outside of their nature. The Pittsburgh Pirates have fallen off the side of the Earth two years in a row. The Cleveland Indians pulled the penthouse to outside dip as well. The status quo says this shouldn’t happen, but inside the lines, all the elements of team success have quietly come together at once, to make a pretty loud boom…

There’s the established talent. Adam Jones is one of the most talented players in baseball, and is entering his prime in a big way. A plus defender that’s set career highs in home runs doubles and steals already, with high marks in RBI and hits guaranteed to follow. The homegrown, yet steadily underrated Nick Markakis joins him in the outfield, while All-Star/Gold Glove catcher Matt Wieters is nicely sliding into his own as well at the same time. The foundation is strong.

There’s the right skipper for the job. From day one, Buck Showalter (Ed's note: We accidentally put Davey Johnson here first and we deserve to be crucified. We've fixed it, please don't throw tomatoes at us.)  has created a spark in the club, and for the first time, the club is sustaining it.

There’s the promise, the kid, Manny Machado. The O’s didn’t pull any punches and put all of the best they have to offer from everywhere in play. The youngest everyday player in the American League was called up a year early and is playing out of position but, if you didn't know any better, you’d never know it.

There’s the coming-of-age on the mound, a pitching staff that’s led by non-dignitaries such as Zach Britton, Jason Hammel and staff wins leader Wei-Yin Chin. Add in All-Star, 40 save closer Jim Johnson and a mound crew that’s beat more odds than any other is complete.

Much of the story is from the payoffs of risk acquisitions, finally of the non-huge contract variety, coming up big. The most notable may be the ultimate feast or famine swinger in today’s game, Mark Reynolds, and his Yankee-slaughtering ways. He’s knocked as many stakes through the hearts of the opposition as anybody has in the last month. Toss in a couple more castoffs, such as former All-Star and, more recently, mid-season cut, Nate McLouth. The leadership pickups of Randy Wolf and future Hall of Famer Jim Thome and what’s looking to be a theft job in former Rangers uber-prospect Chris Davis, and you’ve got storm that’s a brewing.

What’s more than all of this is that it’s not happening when nobody is looking. Unlike when the Rays or Marlins have pulled off miraculous runs like this, the fans are there. Camden Yards, one of the most beautiful places baseball has ever been played, has once again become one of the most hostile and vibrant places as well. It’s getting a storm brewing for October started early. A long suffering and deserving fan base has found a lifeline again.

You take all of that, throw it together and you see the word "fluke" should be the furthest thing from your mind when this team is dissected. Flukes don’t set MLB-records for extra innings and one-run games won in a season; that’s territory reserved for team with a factory full of heart. Heart and hunger can’t be measured. They flat-out want it and in a way that can only be fueled by a sense of urgency from a team that is fed up with being afterthoughts or wash-outs for years. Their time is now, and they aren’t waiting for anybody to get out the way.

6 Replies to “The "Magical" Resurrection of the Baltimore Orioles”