This has been a season of surprises thus far across Major League Baseball. The Nationals are dominating the NL East. The Pujols-less St. Louis Cardinals haven’t skipped a beat…while the Pujols-plus Los Angeles Angels can skip a beat(ing). There’s a lot that’s different in an unpredictable way, yet still enough has stayed the same: Matt Kemp and Josh Hamilton are doing work.

In the spirit of the election year it is, let’s get into the spirit of it all: who would you rather have leading your club? To truly figure this out, have a look at these two candidates that have stepped apart from the pack thus far. Both are do-it-all, Gold Glove, in their prime, leaders of five of the six Triple Crown categories in baseball this year. And both have their teams with the best record in each of their leagues while embarking on their respective tears. So they aren’t just eating at tables by themselves; it’s rubbed off on everyone in the same fitted as them as well.

So, the question begs: who would you cast your vote for as cream of the crop this year? There’s little that one does that the other doesn’t, and in regards to what can be done on the diamond, that’s basically pitching and throwing t-shirts into the stands. But if we’ve got to choose…here’s what’s on the table.

Getting straight into it, nobody has played a better calendar year of baseball than Kemp. Since last April, he’s led the National league in home runs, RBI, hits, batting average and runs scored. For an added bonus, he’s tossed in 42 steals as well, just to make sure he’s not bored when he bothers to only take one base at a time. He’s hit his prime in a major way and has been a new man since the calendar turned on 2010 (And I’m sure it’s only a coincidence he got his legs back up underneath him at the same time he ended things up with Rihanna. Has to be, right?).

Somehow, he’s taken his game to yet another level this season, and may have wrapped up the best month of baseball many of us have ever seen. As the calendar turned over to May, he was sitting in a position he’s made look like his rightful real estate: atop each Triple Crown category in the NL. After a season where he nearly pulled off that trick for the first time in the NL since 1937, he’s legitimately looking like he was just getting warmed up. And after a year where he was the victim of the biggest MVP heist in most of our lives, that’s looking like that’s just a matter of staying alive for him to amend that issue. 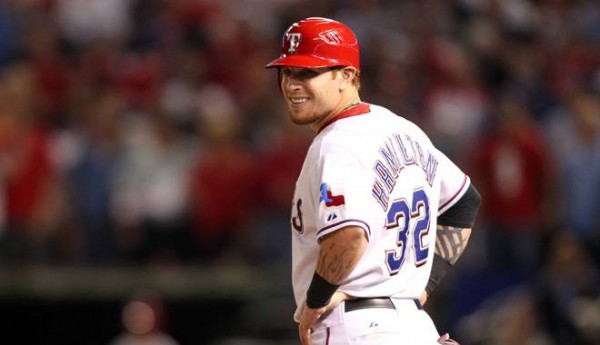 So how could anybody else touch what’s going on there? Well, there’s a matter of the guy that’s not so quietly been on the best run of success in all of baseball over the last four years that’s right up there with him on the American League side of things.

Josh Hamilton is what Roy Hobbs from “The Natural” would be if he found a tattoo parlor instead of a bullet in the gut. He’s got off-the-charts pop, a rifle arm and a non-stop sense of urgency and redemption like nobody else has in the game. Over the last five years, he’s a) come back from the brink of drug-related career death, put on the greatest show in Home Run Derby history, won a batting title, an MVP and been to two World Series in as many years. And now his effort this year is making that entire effort look like light work.

He’s the biggest threat on the best team in either league. He’s responded to doubts about his fitness to start the season by playing his best baseball of his career since his 2011 MVP effort. He’s led the charge to bury the early season hype around the Angels by launching the Rangers to a better start than any of their previous two AL Championship seasons. What’s more is that he’s taking to the field in the last year of his contract, and judging by the type of Ed McMahon status checks that are getting handed out to guys that aren’t doing half of what he does, or just his peers (such as the $160 million Kemp had handed to him in honor of his big season last winter), he may still just be getting warmed up for what could shake out to be summer-long, one-man Home Run Derby in Arlington.

Really, you can’t go wrong because the differences between them are marginal. Kemp is faster, Hamilton is better in the field. There are 750 active MLBers today, and if you’re going to pick from them, there’s about 748 worse ways you could go right now. Choose wisely.

7 Replies to “How Do You Want It? The Case for Matt Kemp vs. Josh Hamilton”