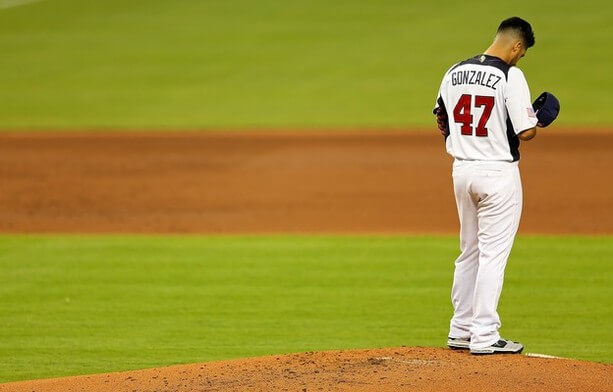 America has been passed up in its original game, again. In the span of two games, Team USA was bounced from the World Baseball Classic in a resounding but quiet manner. So for the third time in three tournaments, the Americans are sent home in a premature fashion, yet what happens behind it is the true test of if the times have changed.

The question has to be asked: How in the world does Team USA not even qualify for the finals of a baseball tournament? With a team full of Major League Baseball All-Stars, they were drummed out of the WBC by a Puerto Rican team that sent a 38-year-old with a 20-35 career record in Nelson Figueroa, and then closed out by J.C. Romero, who was released from the St. Louis Cardinals after eight games last season after getting wrecked with nine runs in eight innings.

This was all it took to bring a run that seemed to finally see a U.S. team live up to expectations. The American presence this time around was different. Keeping with the theme of the entire tournament, there was more passion in the U.S. team than before. It started off with an ultimate eye-roll moment, when Mexico knocked them off in their opener, with reigning Cy Young winner in R.A. Dickey on the mound. Yet in the next two games, with their back against the wall multiple times, America fought back, and fought hard. In wins over Canada and Italy, they showed the passion to match their talent and expectations to confirm that the country that is home to the highest level of the game was finally ready to take its expected place.

Yet none of this truly came to be, and it was just a passing moment that ultimately added to a heap of disappointment that’s become the norm when considering Team USA's approach to the World Baseball Classic.

Apparently this means something to everybody else except for American ballplayers. When another team beats the U.S., it’s a big deal. The Dominican Republic, who is full of arguably a higher caliber of player, pound-for-pound, than the Americans, still celebrated their win over the U.S. as if it was the greatest victory in the team’s history. Puerto Rico did the same when they dealt the death blow to the U.S. on Friday. This is because they understand who America should be in a match-up of nations, even if the majority of Major League Baseball doesn't feel the need to represent this.

Yet, it can’t be said that America did not send a team capable of winning it all. David Wright played like a Congressional Medal of Freedom should be handed to him this summer. Two former MVPs in Joe Mauer and Jimmy Rollins made big hits a habit, and Gio Gonzalez and Derek Holland turned in great efforts on the mound. Round out a lineup that featured Ryan Braun, Giancarlo Stanton and Brandon Phillips, and this is a team that was built to win.

Yet in the end, there will still be more left to the imagination, just because of everything that wasn’t. America’s greatest advantage against any other nation is its pitching. A country that counts Justin Verlander, Clayton Kershaw, Matt Cain, Stephen Strasburg, Cole Hamels, David Price and Cliff Lee amongst its ranks can do better than the Dickey, Ryan Vogelsong and Derek Holland rotation that it produced. There has to be a push to get the full potential of U.S. talent in the game. The Mike Trout, Andrew McCutchen, Prince Fielder and Buster Posey class has to come as well.

No expense SHOULD be spared. But really, the truth of the matter is, they don’t see the point in it. Need proof? Just take David Price’s reaction when approached about his absence from the team:

No im saying its not the olympics and at a terrible time for pitchers RT @marioareinamo: @davidprice14 so you're saying WBC is not worth it?

Well David, baseball doesn’t exist in the Olympics anymore, so the WBC is the equivalent now. This has to be understood by Americans of his caliber, as it apparently has been by every other country by now. Many fans' expectations changed this time around, and there's nothing like getting behind your country. And now the cries for players to match this desire will be louder than ever.

It’s going to take a brief dedication to country over club for things to ever turn in the favor of the U.S. It’s not the WBC’s fault that it isn’t as relevant as it could be; it’s the players'. Understandably, players are going to be concerned about preparing for their season, where they earn their livelihood. But some sacrifice can be reasonably expected in the greater good of the game. Surely, it was not easy for LeBron James, Kevin Durant and Russell Westbrook to play a condensed NBA schedule, followed by a full playoff schedule and then wash it down immediately with a summer in the Olympics, but they did it and the result was America standing in the place that it should, as well as basketball showcasing itself in its proper fashion.

The main difference here is clear: In basketball, the players want it, badly. If baseball ever wants to live up to its traditionally assumed role in the worldwide sports scene again, it’s on the players to put that same pride into their game’s top “exhibition.” Because these other clubs, they aren’t playing it as just as a demonstration that requires a national entry; they are playing for keeps. And in the process, they are raising the standard of their countries at the expense of America and its own game.

Or at least what used to be.

3 Replies to “Does Team USA Really Care About The World Baseball Classic? Not Yet”