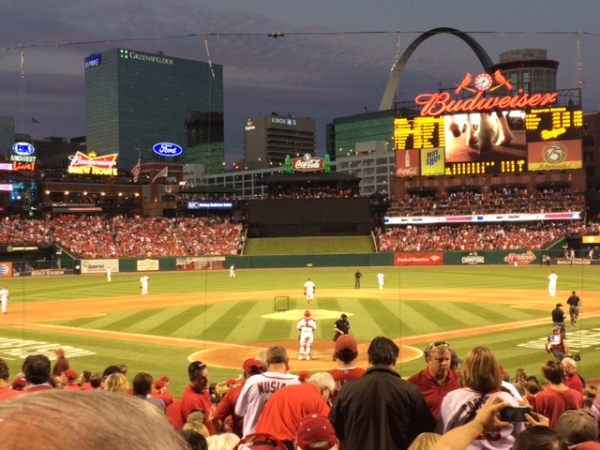 There are few places in the world like St. Louis, Missouri, when there is postseason day baseball to be played. Actually, allow me to retort, there is NOWHERE like St. Louis when there is playoff baseball that awaits. Now, I am completely aware that I could, and shall, be called a “homer” and a staunch member of the infamous so-called “Best Fans In Baseball,” which has somehow reached the level of being called a supporter of the 1940s era of German Politics in reason years, but sometimes it just is what it is and that's all it can be. St. Louis is a rabid baseball town, and the longer the season goes, the more evident it becomes.

Blame that on tradition if you will. A division title is celebration-worthy for sure, but when there are 11 World Series flags and another eight pennants to celebrate, the years that stopped short as "only" National League champions, it is understandable that not just any stakes raise the city’s temperature.

On Tuesday afternoon, the city was especially buzzing. Downtown was particularly packed between the scattering of pep rallies, bars that barely had enough time to count their money from the night before and the ever-present offshoot of Busch Stadium, Ballpark Village — the Budweiser-influenced uber-bar center that houses game viewings and social gatherings of all sorts. It is still beyond me why any business bothers to trouble its employees to come into work on playoff days, but that is a wonder for another day.

The day's sensation was at the epicenter of it all inside the third incarnation of Busch Stadium, where the Cardinals were in position to take down the favored Los Angeles Dodgers in what could have been the final game of the year in the city, which is always an ominous idea. The afternoon followed a thrilling victory in the series’ third contest, which saw rookie second baseman Kolten Wong sing his personal postseason redemption song with a two-run home run that pulled the Cardinals ahead two games to one. Yet what loomed for the team was a second encounter with the world’s foremost issuer of baseballs from 60 feet, six inches away, Clayton Kershaw.

Despite the task ahead, the stadium was at a steady buzz that resembled the sound of a big, late-inning hit during the regular season. And despite having been to the ballpark probably over 100 times in its nine-year existence, my entry into the seats for this one was unmatched by any before.

Against my usual practices, I reached my seats after the game was already underway (I missed a whole half-inning, which is rather disgraceful), but it was worth it. I made my way into the game as a part of an outing for what I refer to as my “Clark Kent job,” meaning the day work that I do in addition to my literary contributions to the world. I went with a few other co-workers on a customer-sponsored outing — which happened to be 10 rows directly behind home plate, in section 150, seat 12 of 24.

Now, I have regularly sat at field level over the past few years (which sort of shuns the name of this column) but never anything like this. Seeing Kershaw pitch on TV is one thing, while seeing him pitch in person is truly something to behold, but both are things I have done before in the past. However, seeing him pitch at essentially the batter’s eye level is one of the most confoundingly amazing things I have ever seen.

It was a demystifying performance of sorts. No longer do the outings he has made routine over the past few years seem quite as amazing because I looked it straight in the face, and now my amazement has shifted to an appreciation of the hitters who work out hits against him at all. From the tall 6’4" frame that stretched out to nearly seven feet when he lifted his hands over his head, followed by being able to unleash 95 mile per hour fastballs at will, it was incredible. Then when he began to mix in that huge curveball, that is when it really got out of hand. I was fairly certain that nobody on Earth could, or should, be prepared to hit anything he chucked — unless he deemed them worthy to do so.

In the midst of the trance-like perception that I was taking Kershaw in during the midst of a must-win game in the middle of a crazed stadium, there was yet an even more improbable happening: I happened to be sitting right next to Brett Hull.

Yes, THE Brett Hull. The Golden fricken Brett. The greatest St. Louis Blue of them all. As he sat there decked out in a Saturday version of the Cardinals jersey, with a few women (which I couldn’t determine if one was his daughter or wife, not that it mattered), I realized that this was one of my biggest brushes with greatness in my life. When you grow up in St. Louis at the bridge of the 1980s into the '90s, there are two gods: Ozzie Smith and Brett Hull. For this brief three-hour run, I was sitting at the right hand of Slapshot God. He ended up being pretty chill, and I even got to hand over a $7 water to him once. All was right in the world … maybe with the exception of what was happening on the field about 15 yards from me.

As the seventh-inning stretch came into play (and Brett and I got up to stretch our legs in unison, of course), it was looking like a trip back out west would come to be. The Cardinals had one hit to their tally, while the Dodgers had just pulled ahead by two runs. But then what seemed impossible came true: They got two hits in a row and mounted a threat.

Then, it happened. Matt Adams launched that curveball that reeked of the poltergeist for seven innings over the right centerfield wall and put the Cardinals ahead with six outs left in the game.

Pat Neshek and Trevor Rosenthal handled the rest, and the perfect day went full circle. As the sun had set on Busch, the night brought another day to the Cardinal run for World Series pennant number 12.

In the end, the Cardinals beat Clayton Kershaw for the second time in four days, one less time than he lost in total over the previous five months, and reached the NL Championship Series for the fourth time in as many years. And me, well I got to take it all in from the best seat out of the 46,000 available, next to the Slapshot God and all for the grand total of $0.

Some days, the sun just shines on you a little bit brighter than others …

Or it shines on Brett Hull as it usually does, and you get a little bit on your shoulders as well. Either way works for me.

One Reply to “Shock The World Chronicles: The St. Louis Cardinals, The Playoffs & The Best Day In Baseball”