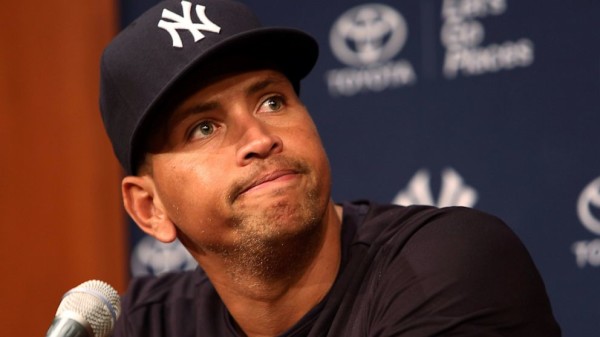 Two passages in particular jumped off the page. First is Price's aside on writers themselves:

Time now to speak of writers. We are, most of us, a particularly cramped breed, gunning for little victories: the newest wrinkle, the most telling detail, the juiciest quote, the phrase or paragraph or -- please, God -- page that approaches the song in our grasping, caffeine-riddled minds. Writers are selfish. Writers judge. Writers trust words more than people. There's a reason writer and neurotic so often end up in the same sentence.

Second, and one in which I can expand on without desecrating the thought, is an early Rodriguez-Cramer interaction. From Cramer's unpublished A-Rod manuscript:

... he couldn't have been nicer. I told him I wanted to write a book about his whole life, the real story, and he thought that was great. The real stuff, he said, never gets written. And he said it was good luck that I had shown up, because he had a question for me, too: He'd been thinking about it, but he just couldn't figure ... maybe, as an experienced writer (he meant old), maybe I would know ... it was bugging him, he couldn't think of a reason.

Why did I think he was getting such lousy press?

It's a complicated question made more complicated by the man who asked it. Price makes a compelling case that Cramer is the most influential reporter of the late 20th century. Even he couldn't expound the enigma that is Rodriguez. A-Rod's query, and subsequent aloof behavior, suggests he barely knew himself.

The answer, then, isn't an easy one, and Cramer never finds the words he wants. This in turn makes life difficult for all of us who seek to solve A-Rod. "If Cramer can't, who can?" Price seems to ask.

We do have an out here. Why did A-Rod get such lousy press? Some of it derives from his attitude. It's telling that the one man who was once thought to be his best friend in baseball, Derek Jeter, distanced himself from Rodriguez when they became teammates.

Part of it has to do with baseball's moral standing. Records are sacred, as are legacies. When Rodriguez, with performance-enhancing substances running through his veins, set his sights on becoming the best, he tainted every player, from Ruth to Mays to Aaron, in that discussion. The mere mention of his name sullies paragraphs.

It all feels unfair to A-Rod, which isn't to excuse his actions, but rather to suggest that he came at the wrong time in history. Perhaps no player in baseball history has been more flawed for superstardom than Rodriguez. At 18 he was a phenom. At 25, the richest athlete in history. But Rodriguez was never built for baseball, especially in the time of the omnipresent media.

No other sport measures its players against perfection like baseball. Batting averages start at 1.000 and drop precipitously to the low hundreds. Statisticians keep track of errors — mementos of mistakes. Pitchers record "perfect" games.

It's as if Rodriguez recognized the pursuit of perfection and endeavored to grasp it. Such a mindset creates what most might call a "fear of failure." In baseball, you have to welcome failure lest that fear quickly becomes an acceptance of not being good enough. Rodriguez certainly had that. It's what drove him to performance-enhancing drugs in the first place. It's why he's melted so many times in the public eye, why he's been so quick to slap a first baseman's mitt and shout "I got it" when rounding third base on an infield pop-up. When you can't beat the game, and you know you can't, you cheat it.

Had Rodriguez come at a different time in baseball, he likely would have hit his way to a Hall of Fame career. Vice has always followed the game. A-Rod would have found it, whether it be booze, women or gambling. Writers looked the other way. Fans only saw the hits. Ask Ty Cobb. Ask Babe Ruth.

But when perfection is your vice of choice, you better be prepared for perpetual disappointment. A-Rod was Hercules with an egg shell ego, bigger than the game and incredibly vulnerable. He couldn't survive when we no longer looked the other way. Cramer, a bastion of the modern age, couldn't wrap his head around that. Indeed, who can?

Now we're left with the fragments of a dying man, some great, some bad, none that make sense. With a 162-game suspension looming and all good will gone like 654 home runs, Alex Rodriguez is as good as buried. What will it say on his dirt-covered grave?

One Reply to “S.L. Price, Richard Ben Cramer And The Last Words On Alex Rodriguez”