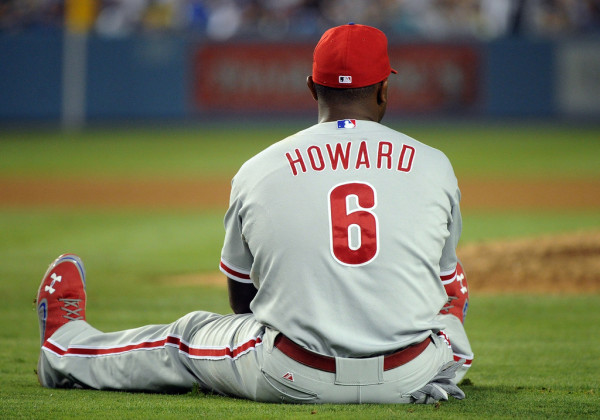 We have all witnessed, with frustration and, for me, sadness, the steady decline of Ryan Howard over the past three years. After bursting onto the scene in 2005, we watched with joy and excitement the Big Piece’s rise and run of success, including six very good years and four that are some of the best in Philadelphia Phillies history.

Then, on an October night in 2011, the beginning of the end started with Howard crumpled on the first base line, having suffered a ruptured Achilles. And though we couldn’t know for sure at the time, the decline of Ryan Howard was about to commence with the same speed as his meteoric rise.

Not coincidentally, Howard’s decline has mirrored the decline of the Phillies — just as his entire career arc has mirrored the fortunes of his team since the Big Piece smashed 22 home runs in just 88 games en route to Rookie of the Year honors in 2005, leaving Phillies fans with images of a parade down Broad Street dancing in their heads.

In 2007, he bashed 47 home runs and knocked in 136 runs. He finished fifth in MVP voting, and the Phillies earned their first playoff berth in 14 years.

In 2009, he hit 45 home runs and had 141 RBI. He finished third in MVP voting and made another All-Star appearance. The Phillies once again won the pennant, with Howard leading the way. In that NLCS, all he did was hit .333 with a double, a triple, two home runs and eight RBI with a 1.457 OPS while winning the MVP of the series.

In 2010 the numbers were “down” a bit, with “only” 31 home runs and 108 RBI. That was still good enough for another All-Star appearance and a 10th-place finish in MVP voting. And the Phillies won the division for a fourth straight year.

2011 produced what some would call another “down” year, though the numbers rose slightly from 2010: 33 home runs and 116 RBI. He again finished 10th in MVP voting, and again the Phillies won the division. Then in his final at-bat in the 2011 playoffs, the Phillies’ impressive run came to an end, along with Ryan Howard as we had come to know him.

Just for a little perspective, let’s compare some of Howard’s numbers with Mike Schmidt, undoubtedly the greatest Phillie ever as far as position players go. Both have career averages of .267. Howard has a slugging percentage of .532, Schmidt .527. Howard’s OPS is .889, Schmidt’s .908. They both averaged 30 home runs a season. Howard averaged 93 RBI, Schmidt 89.

Now let’s look at their 162-game averages: Howard’s .267, 41, 130 to Schmidt’s .267, 37, 107. Now I’m not trying to say that Ryan Howard is better than Mike Schmidt. Schmidt’s longevity and stellar work defensively immediately open up a decent gap between the two, and then you can factor in larger ballparks and a less gaudy offensive era. I’m just trying to illustrate that offensively, Howard’s prime seasons are on par with anybody, and despite his recent struggles skewing the numbers, his offensive impact throughout his career cannot be ignored.

Howard never returned to form after that fateful night in 2011. He scuffled through the 2012-13 seasons, battling injuries and age. And through the first half or so of this current 2014 season, the patterns of the previous two seasons have continued.

For Phillies fans, as well as fans of hitting, particularly power hitting, it has been tough to watch. This man, who was once among the most feared hitters in baseball, has, as of the week and half, been reduced to a platoon player. From 2006-2011 it seemed unthinkable that this is how the story would play out for Ryan Howard, the Big Piece. Yet here we are.

The current situation with Ryan Howard and the Phillies is sad to me. There are calls for trades, even if the Phillies have to pay a large part of the gargantuan salary that is owed to Howard. There have been calls to outright give him away, simply buying him out and sending him on his way. And there have been calls for what manager Ryne Sandberg has ultimately done, which is sit Ryan Howard for multiple games and effectively set up a platoon situation at first base.

Now, I understand where the angst and outright anger are coming from. This man is making $25 million a year. His home run total over the last two and a half seasons doesn’t reach the numbers he was putting up for one season in his prime. He is making a lot of money and producing very, very little.

I’m not asking fans to give him a free pass, and I’m not asking the team to avoid exploring every option to fix the situation. I’m just asking everyone to tone down the vitriol and the hate, to remember what this man has done for this franchise. Think about what this franchise has accomplished over its 130+-year existence and compare that to what it has done in the 10 years that Ryan Howard has been a part of it.

Remember 2006-2011 and the role that Howard played in that. Remember the joy, the excitement. Remember the buzz at the ballpark. Remember that the Phillies were can’t-miss TV, especially when Ryan was at bat, like no team had been in this city since Allen Iverson and the 2001 Sixers. And remember the parade down Broad Street, because for my generation that is the only one we’ve had so far.

Remember all of that, and give the man some respect, even in these difficult times.