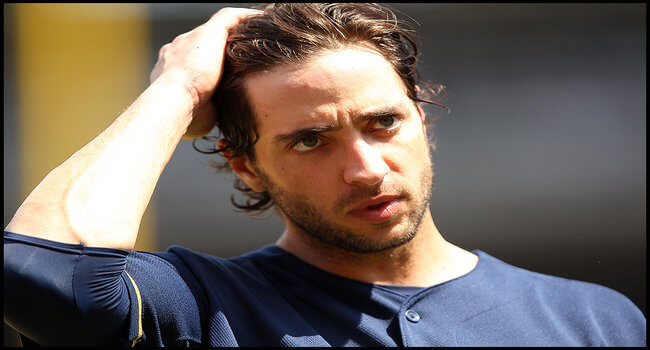 What Ryan Braun has done over the past 20 months is worse than anything that Alex Rodriguez has ever thought of perpetuating.

If there’s anything to give Rodriguez credit for, it is at least that he has not been shy about his transgressions. If the masses have been upset about A-Rod for anything in his career, it is how brashly he has gone about disregarding the normal conceptions of humility and regard for image. However, when Braun was faced with the exact same situation, a few months after winning the National League’s Most Valuable Player in 2011, he immediately took so much exception that he spun the general belief of the public in his favor immediately.

“No, not Ryan Braun. He’s not one of those guys. He doesn’t have the build for it. He doesn’t look like McGwire or Bonds or Sosa or any of the rest of the Legion of PED Doom. And look at how they handled it?! There was incompetence all around. He’s been framed. No way could this be true.”

That was the sincerity of emotion and support than Braun pushed for and ultimately received when his suspension was overturned. Yet in the end, all he ended up being was the most sincere liar the game has seen yet. He takes the crown of thorns because of the fact that he put the most immediate and succinct effort in clearing his own name and all the while attempted to hide behind his superstar name, awards and a positive relationship with baseball’s commissioner while committing his baseball sins in the most shadowy backdoor clinic that’s appeared yet.

He willingly threw everyone he could grab under the tracks to keep himself afloat until he was ready to join them, albeit on his terms. Yet now that he will finally be suspended for the crimes he so passionately claimed innocence of, he still manages to walk away while leaving an unmatched lay of ruins in his path. In one swoop, he has cosigned every level of the game's critics' claims against the sport and betrayed the trust that was given, if not stolen away, in his favor.

It will begin with the 65- game suspension that he will serve immediately, a rather timely fall from grace. A fall that has only just begun, because this time, there’s just as much wrong in the crime as there was in the intent. Even in accepting his punishment, he has done so in a disgraceful manner. The decision to forgo an appeal is not a stand-up one to face his consequences head-on. Rather it is an optimally timed cop-out.

He is not the man he was two years ago. He is not the MVP who nearly guided the Brewers to their first World Series since the Ronald Reagan administration. Rather, he is a member of the same franchise that is now the second worst team in the National League and is left with the highlight of its season being created by the lowlight of its most famous lowlife. It’s the ultimate self-service play: Braun gets out of a brutally bad season early, with plenty more baseball to be played to take some of the attention away from him, and he gets out of the way before the rest of the dominoes fall. But this is the biggest fraud of the entire situation because he has absolutely nothing to lose. Of all of the potentially involved players in the Biogenesis scandal, he is the most set. He’s the owner of a contract that will pay him another $113 million, guaranteed, through 2019. In the big picture, he has absolutely nothing to lose, besides his “good” name.

There’s no nobility in this at all. While he is merely the first to take the fall from the upcoming fallout, the fall guy is taking a long dive into a pretty soft pillow of a landing that he consciously prepared for himself long ago. Apparently, it’s not such a rough life being a “former great” by the age of 30, if you frame yourself just right for it.

10 Replies to “Ryan Braun: The Unashamed, Shame Of The Nation”