Yesterday, Roy Halladay signed a one-day contract with the Toronto Blue Jays and officially announced his retirement from Major League Baseball. We here at TSFJ only felt it appropriate to honor one of the greatest pitchers of his generation. So here are a few words shared by Toronto Blue Jays fan Alex Wong (aka Steven Lebron), Philadelphia Phillies fan Joe Boland (aka Reverend Paul Revere) and our resident baseball expert Matt Whitener (aka Cheap Seat Fan).

Being so immersed with the online sports crowd, it's not often, if at all, that such a simple statement can be made about any athlete. We analyze everyone, pick apart their flaws, then overanalyze some more, form an opinion, then do it all over again.

With Doc, it never needed to be that complicated. There was the last day of the season against Detroit when he was one out away from the no-hitter, then a huge blip that saw him sent down to A ball after his ERA hovered over 10.00.

But when he came back, he became the pitcher we all thought he would become, and more.

All the years he spent in Toronto, he never got a chance to play in the postseason. The Jays were never terrible for long stretches, just stuck in an awfully difficult division where 85-90 wins meant you were still irrelevant and playing meaningless games in September.

During the Halladay era, I always thought if we could just get in the postseason and line up Doc for two to three starts each series, we could win all those games 1-0, scrap out a couple other wins and win it all. He was that good.

When he came back to Toronto as a Phillie the year after he was traded, I bought a single ticket to the game, sat in the nose bleeds, and just soaked in the standing ovations and another vintage Halladay performance.

One of my favorite athletes to ever come through Toronto, Halladay was a great pitcher and an even better person.

He'll be missed. I've been missing him since he left Toronto. I still do. — Alex aka @steven_lebron 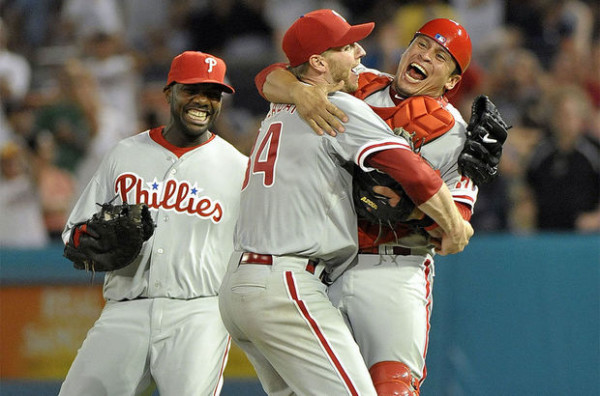 Brotherly Love From A Philadelphian

As Alex pointed out, we tend to analyze and overanalyze our athletes these days, and that's all well and good. We should use advanced metrics, more details and learn as much as we possibly can about our athletes.

But Alex is right — with Roy, it's as simple love. The love of the game. The love of the work. The love of a player who always shows up, always works his tail off, always takes the ball and always gives it what he's got — which just so happened to be better than anything else anyone else had on most nights.

Yes, Roy Hallady was only in Philadelphia for four of his 16 MLB seasons, and injuries and age made him a stranger in the final two. But I love Roy Halladay nonetheless, and I love him for so many reasons.

That alone made Phillies fans so happy that some brilliant genius started a blog with the express purpose of going to the zoo with him.

The second he donned those red pinstripes, every Phillies fans imagined more parades down Broad Street, a dynasty led by the best pitcher in baseball. We had heard all about Roy Halladay, but we only knew what we heard. I hadn't watched much of Halladay over the years, him playing for an American League squad that didn't exactly conjure good memories for Phillies fans. But the expectations were so sky-high it would be near impossible for anyone to meet them.

Anyone but Roy Halladay, that is. Because not only did Roy live up to expectations, but he far, far exceeded them. In his first season, all he did was toss a perfect game, win a Cy Young, dominate from start to finish and lead the Phillies to the best record in all of baseball. Then, in his long-awaited postseason debut, he no-hit the Cincinnati Reds and later staved off elimination pitching with a pulled groin.

It was far and away the greatest pitching season I've ever seen from a Phillie, and he damn near did it again in 2011.

But these past two seasons haven't change a damn thing. Halladay — injured, aged, battered — kept going out there, kept taking the ball, kept working his ass off and kept making no excuses. For 16 seasons, he dominated the way few ever have. And in five more years, he should be taking his rightful place in Cooperstown.

This morning, Roy Halladay took out an ad in the Philadelphia Daily News thanking the Phillies and the fans, being the class act that he is. But really, he shouldn't be thanking us. We all should be thanking him.

I love Roy Halladay, and I sure as shit would love to go to the zoo with him. — Joe aka @RevPaulRevere 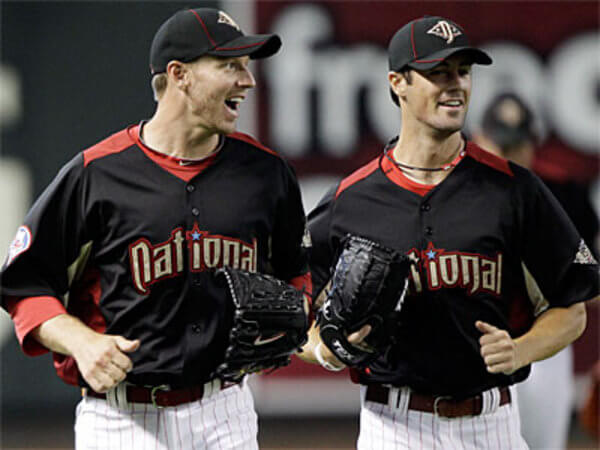 For much of the last decade, the question about who was the best pitcher in baseball started at number two. For a good part of the time, this was a well-kept secret, due to a great number of his gems being thrown outside of the postseason chase sphere for the Blue Jays. But something happened around 2008 or 2009: He just became too great to deny anymore. The cat was out of the bag — the best in the business was north of the border. Yet he got his day in the sun, and it made light of the fact that he’d been doing this for a long time.

Whether it was during his run of triumph in spite of it all in T-Dot or in his later incarnation with his turn of fortune (and perfection) in Philadelphia, Doc Halladay at his very best stood at the pinnacle of both competition and resilient results.

He excelled regardless of surroundings for the bulk of his career. From 2002 through 2009, he only once pitched for a team that finished any better than third place in its division. Despite this, he won at least 16 games on six different occasions, including 19 games in 2002, 22 in 2003 and 20 again in 2008. In those respective campaigns, he won 24, 25 and 23 percent of all Blue Jays games himself. In four different seasons, he won at least 75% of his starts, and after his 25th birthday, he only once won less than 63% of his games. That goes past efficiency and winning “in spite of” anything; that’s pure dominance.

The perfect blend of strikeout artist with corner-painting finesse master, he was also a bulldog of the meanest variety. He was a man out of time in his approach to the mound. On game days, he was in the Bob Gibson/Randy Johnson vein of hurler, refusing to respond to any human interaction of any sort, even from his own catcher. And once he got the ball, he was not giving it up easily. From 2007-2011, he started what he finished 42 times, with 10 of those games ending as shutouts.

In the end, what puts Doc over the top is just how great the summit of his peak was, in addition to how long he stayed at a premium level. At his most transcendent, he reached absolute perfection with an eerie ease. He threw a perfect game and a no-hitter in his first season in the National League, with the latter coming in his first career postseason game. And in his second trip to October, he was on the losing end of one of the great postseason games ever versus his best friend Chris Carpenter, despite throwing eight shutout innings to close out the game.

As a final period to time-stamping the dominance that Halladay had over his era: He was a winner of two Cy Young Awards — one in each league and coming eight years apart. This is the type of bookmark excellence that should be remembered, and rightfully will be. And it rightfully should be five years to the day from now, the first second that Cooperstown can consider him. — Matt aka @CheapSeatFan

4 Replies to “Roy Halladay: The Workhorse Who Made You Believe”