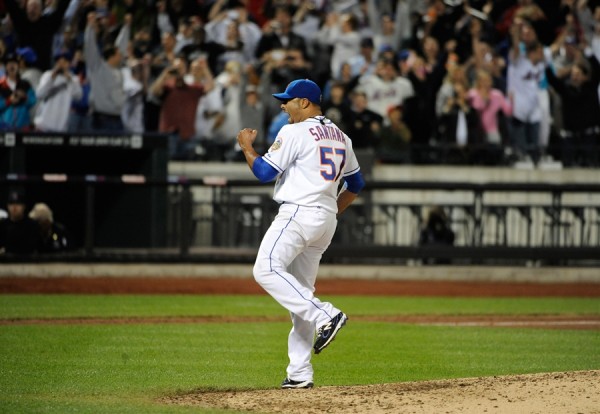 This definition is long what baseball has represented in America; a major part of the fabric of the country’s identity. However, you can take this same term, break it apart and also tell a story of what a major part of Major League Baseball’s on-field policy has become: past its time.

There’s nothing wrong with tradition. It’s central to what makes baseball great. Of all professional sports, the MLB has been the most resistant to change of any. It was the last to expand its ranks, the most stringent in back stepping over its previous rulings and most notably, the most hesitant to use technology in any regard. And now, baseball’s most important element, tradition, has been compromised yet again by its resistance to the one thing that’s (ironically) holding it back: change.

Last Friday evening, New York Mets pitcher Johan Santana completed one sport’s most difficult and awe-inspiring tasks when he broke off a 131-pitch no-hitter against the St. Louis Cardinals. He was roundly applauded for the history-making task, which capped an amazing comeback and ended the longest dry spell for any franchise without ever having a no-hitter to its credit in the 50-year Mets.

But there’s one big problem here: he didn’t actually throw one.

Despite the amazing effort and efficiency he showed on the mound, and the arguably even greater effort the Mets’ defense showed behind him, drive down the left field line by Cardinals’ outfielder Carlos Beltran, on review, clearly struck the white foul line, and therefore is a considered a hit by the official rules of the MLB. The only thing is that to the naked eye, it would have been impossible to see this in real-time. The only way to really tell that it had actually hit the line was by the slow motion cameras that ESPN, Fox Sports and even the crowd’s cell phones could create.

Now call me crazy, but if there is a way to better officiate the game being played, and get a clearer vision of the course of it unfolds, shouldn’t the actual officials that are responsible for the course of the game have every tool possible to do so at their expense? It’s not as if they can’t utilize such a tool already for nearly an identical purpose. Despite baseball’s rock steady resistance to letting technology take a hold of the officiating of its game, in 2011, it did begin to allow for home run calls to be reviewed, judging if they either cleared the fence or stayed fair or foul up the foul pole. Well what’s wrong with an extension of that rule into the field of play beyond its most famous scoring play?

The fear is that too much challenging of plays will slow down a game that is already looking for as many ways as possible to speed up. This was the same concern the NFL had when it mulled allowing for instant replay to take a bigger role in its game. But conversely, what’s resulted is not a game that has slowed down to a damaging pace, but a game that takes what equates to a commercial break to sort things out and then emerges with a much more decisive, less controversial outcome.

What’s wrong with that? The frequency of such plays wouldn’t come up enough to do a true setback to the game, and doesn’t polarize or handicap the umpire’s ability to execute their jobs. It cuts back on the “Why are you out here doing this when you know nothing is going to change?” nature of manager-umpire fights.

Most importantly, it progresses a game that must find subtle ways to stay with the times, while not sacrificing who it is. Even the most righteous of baseball purists (I just stopped typing briefly to raise my hand in recognition) can’t see a fault in that. Baseball is a game of inches and miles. It is equivalent the greatness of both the completion of great moments, as it is in the spoiling of them, even by a split hair. When those moments are turned inside out, just by the proverbial dragging of feet against the simplicities that innovation brings, it’s no good.

I’m not proposing turning the game into some tricked edition of Tron with bats, gloves and fitteds, but a little bit of living in the times wouldn’t hurt either.

3 Replies to “Pulling the Pastime Into The Present”