Unlike in the American League, there was absolutely no drama about who would be represented in the National League Wild Card Game. Rather, the race was more about where it would be played. The Pittsburgh Pirates and Chicago Cubs separated themselves from the pack so far that it was hard for the San Francisco Giants, who finished a remote 13 games out of the final Wild Card spot, to even have hope by the start of September.

So thoroughly dominant were the performances of both the Cubs and Pirates that they both would have won the NL East and West by a minimum of five games, respectively. However, with the MLB-best St. Louis Cardinals heading up their division, the NL’s second and third best clubs are relegated to playing each other for the final Division Series spot tonight in a singular elimination game.

And due to their geographical alignment, it will be a showcase of two teams that are well-acquainted with each other. They have faced off 19 times this year, with the edge going to the Cubs by a slim 11-8 margin. The Pirates won the final regular-season series between the two and will host tonight’s game due to finishing a game better than Chicago at 98-64.

Searching for an edge for either side is essentially running on a treadmill. Where one takes an edge, the other finds a different one. This has been the nature of the sparring session between the two clubs all year as they enter their final confrontation this evening, with each side sending two of the game’s best arms to the mound in Pittsburgh’s Gerrit Cole and Chicago’s phenomenal Jake Arrieta.

Yet baseball will be down one of its best teams by the end of tonight, and the complete playoff picture will be set. Here is where the few advantages can be found for one side over the other in Pittsburgh tonight. 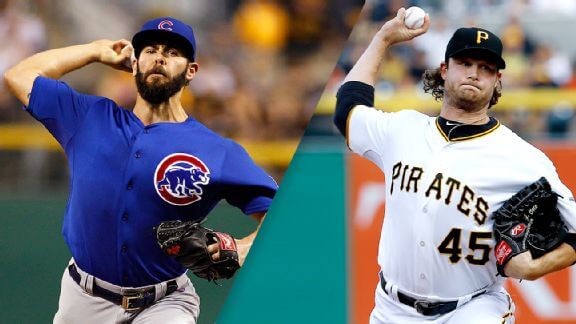 1.) Can either Arrieta or Cole be conquered?

Well, of course one has to crack at some point, but it surely does not stand to be an easy task. Everything about this game coming in says it could go on as a shutout into Thursday morning. Arrieta has been the game’s most untouchable pitcher over the past month, posting an all-time low second-half ERA of 0.75, a mark that was hit by allowing only four earned runs over his past 88.1 innings. This is of particular consequence to the Pirates, as they were his most frequently conquered target over that time. He held them scoreless over three separate starts, each of which went at least seven innings and two of the games being pitched at PNC Park.

Overall on the year, the Pirates have mustered two runs against Arrieta, and you have to go way back to May 17 for the last time they scored on him, which resulted in a 3-0 victory for the Bucs.

Opposing the indomitable Arrieta will be the Pirates' ace in Cole, who, while he does not have those same overriding stats to his credit, has been one of the best in the NL himself. His 19 wins finished second to Arrieta’s 22 for the year, and he also posted the fifth best ERA on senior circuit. In four starts against the Cubbies, he took away a 2-1 record with a 2.13 ERA, while striking out 32 against only four walks.

In addition, the postseason is no new foray for Cole, who announced his presence decisively during his rookie season by defeating the Cardinals in the Game 2 of the 2013 NLDS on the road. The moment will not be new for him, and he is certainly up to the task of at least matching the effort of Arrieta.

2.) Can the Pirates break through their glass ceiling?

The Pirates have been the most frequent attendee in the NL Wild Card game, having competed in each of the previous two contests. Each time they have hosted the game, and each time they have been confronted by a top-notch ace. Two years ago, they overwhelmed Johnny Cueto and the Reds early on, while a year ago they were the first of the many victims of Madison Bumgarner’s legendary postseason run and took a dagger in the heart in the form of a Brandon Crawford grand slam.

With yet again their full season drawn to a single-day survival tactic, experience in the moment is on their side. If they can find a way to swing the big moment on their side and make it stand, this could be a team that emerges with an incredible amount of momentum to take into St. Louis on Friday.

3.) Will the Cubs be able to make the big play happen?

Chicago is the closest thing to an American League-style team that the NL possesses. The Cubs are capable of striking quick and striking often. Nine different players hit double digits in home runs, and their 2–4 combo of Kyle Schwarber, Kris Bryant and Anthony Rizzo take potential at-bats every time up. They have the ability to pile on fast, and it is an unmatched advantage they have on their side.

4.) Can Pittsburgh force it into a battle of the bullpens?

Perhaps the biggest advantage the Bucs possess is the overall strength of their pitching staff. While the bullpen has been an ever-changing picture for Chicago, that is far from the case for Pirates. Between Mark Melancon, Tony Watson and Joakim Soria, they can turn the lights out on any combination of situations late in the game.

Yet there is quality beyond that as well, with Antonio Bastardo, Arquimedes Caminero, Joe Blanton and Jared Hughes all offering strong options that can be used to neutralize the Cubs' impressive left/right balance throughout their lineup.

Having Cole up front is certainly a benefit, but if the game calls for a turn to the pen early, the Pirates turning from one strength to another.

5.) Will experience or youth be served?

As last year’s run by the Royals to the World Series showcased, as well as last night’s victory for the Astros over the Yankees continued to expand on, youth is not waiting in line in October anymore. The Cubs are a young team that depends virtually exclusively on players who have never been in the situations they have played in before, but that is alright too. Not being familiar with the moment does not equate to being unprepared for it. Manager Joe Maddon has had this team ready for this moment for months now.

Conversely, the Pirates have all been here before and are certainly equipped for it. They boast one of the top five players in the game in Andrew McCutchen, a hoard of bats that have seen many clutch situations and a team that is as good in the field as it is at the plate. They know what it means to win and lose in this situation, and will have the advantage of a hungry-for-more crowd on their side.

Predictably, there is little give or take here, but whichever way it sways, it will certainly be earned in a similar fashion.