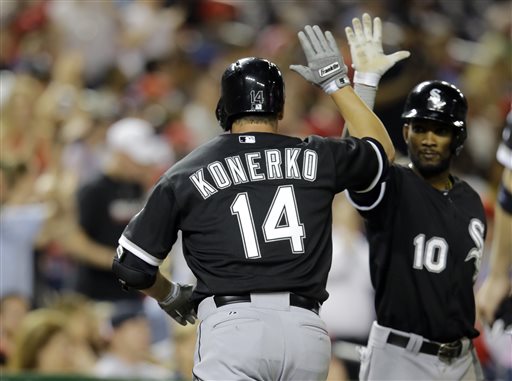 For reasons that are beyond obnoxious at this point, the good, bad and absurd commentary on Derek Jeter’s farewell tour — and the man himself — continues to rage. It’s obnoxious for all sorts of reasons, but the largest that looms is that there’s far more talk about a player and team that will be watching the postseason from home rather than the men that will actually play in October in just a few days.

Yet, if we’re going to take a longer look at someone whose career will officially come to an end this weekend, there’s someone in Chicago who deserves your attention.

It’s easy to forget how good Paul Konerko was because the White Sox have seen better days. Though the future is brightening up a little with Chris Sale and Jose Abreu, these have been some lean years for the Southsiders since they had a victory parade in the faces of those “loveable” losers at Wrigley Field. And yet, for a long time, Konerko was a steady presence in the lineup, and over time he became one of the American League’s most feared hitters throughout the 2000s and even into 2012 when a painful youth infusion began to take shape at U.S. Cellular Field.

(Scott Lindhorn for SB Nation’s Beyond the Box Score gives a very good top 10 list of his biggest hits, including the grand slam off of Chad Qualls in Game 2 of the ’05 World Series.)

Normally, this Scribe doesn’t like being told that something is a must-read or a must-watch. The terms themselves are social media clichés that tend to fail to meet the lofty expectations becoming of a one-minute view. However, in sifting through the continued commentary on Jeter’s final nights in pinstripes, this gem from MLB.com actually lived up to its tweeted billing.

It’s safe to assume that if you are a White Sox fan or a die-hard baseball fan who doesn’t care for the overt pomp and circumstance bestowed upon several other recent legends, then you can appreciate the lower key celebration of Konerko’s retirement. There aren’t national campaigns with hashtags and shareable videos (though this clip qualifies as shareable). There are no former mayors donning their fan gear once more to pay their respects or iconic athletes of other sports making special trips to pay homage. The mystique of the team he made his name with doesn’t ring as loudly as the New York Yankees.

Truthfully, there’s no need for all of that if a player was appreciated by the fans he constantly played for throughout 16 of his 19 seasons in the Majors. Instead, maybe all that’s needed for the rest of the baseball-loving public is a retrospective video as above. Just as Paul Konerko quietly left the batting cage, he leaves baseball in relative silence compared to better known peers.

5 Replies to “Paul Konerko Deserves Some Of Your Attention”

Paul Konerko Deserves Some Of Your Attention

Baseball Clarifying The Confusion: 4 Reasons Why The Derek …