About ten years ago I was at a party in Florida visiting my college roommate, who was working for a prestigious law firm in South Florida. One day while visiting my friend at work I met Cecil Fielder. I was like a kid in a candy store as the man I referred to as Heavy “C” shook my hand, signed a hat for me, and just gleamed from ear to ear the whole time he was in the room.

What I didn’t know at the time was that Cecil was going through financial problems. He was working through a divorce, and his life was crumbling right before everyone’s eyes. One thing about it though - you would have never known it talking to Cecil. He wasn’t asking for anything, and all he talked about was how proud he was of his son who was making his way into baseball. I hadn’t heard much about the young Prince Fielder, but Cecil was sure to let everyone know that his son was legit and that he would soon break into the major leagues.

Sure enough Cecil was right. The next year, Prince Fielder broke through and never looked back. It just happens that I saw an interview from Cecil again in 2007. The reporter giving the interview asked him, “Cecil, you have to be very proud of yours son?” He looked distraught. Cecil said that he and his son weren’t on speaking terms anymore, but he wished him well. This bothered me. How can a man who loved his child as much as Cecil did become such a villain to his son in such a short time?

In my mind, two years ago Cecil was bragging about how he was paying for trainers to come visit his son five to six days a week to help him fight his obese figure. What I didn’t know is that the rift in the Fielder family came when Cecil and his wife were arguing about Cecil taking ten percent of his son’s signing bonus when he was drafted in 2002. Cecil claims that he was owed that money since he was acting as his son’s agent.

Money is a funny thing. It has no relatives. Money makes people do things that they regret and can divide a family like no other. 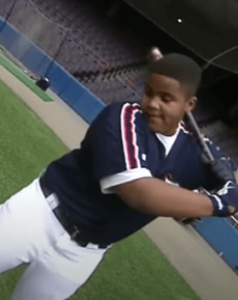 From what I have been told, he will not do any interviews now if his father is going to be mentioned. That is sad. Didn’t he learn anything from Robinson Cano, who had his dad throwing out pitches for his home run performances? Doesn’t he know how much better they could market themselves as the Fielder package?

The Detroit Tigers coveted young Prince since the days when he was twelve years old and hitting bombs for the Tigers. The Tigers recognize the impact that Cecil had on the ball club, and now they have added Prince to produce similar numbers. The Tigers paid handsomely to get Prince in a market that he wasn't really that in demand. Now that things have gone full circle, it's ironic that Prince is now the king of the city that his father dominated. As much as he tries to escape his father's shadow, the more he gets swallowed up in it. If they do finally reunite, they win as a family, and the Tigers will win financially. Father and son day at the ball park takes on a whole new meaning in this situation.

My dad was a deadbeat, but I never once declined him the opportunity to be a part of my life. He just chose not to be there. There is no way in hell though if he wanted to that I wouldn’t have let him. There is also no way in hell that I would deny my children the chance to know their grandfather. TO EACH HIS OWN, but what I do know is that nobody wins in this situation.

Other pages you may enjoy:

13 Replies to “Money Has No Relatives: The Rocky Relationship of Prince and Cecil Fielder”