The Major League Baseball trade deadline came and passed on Friday with a hurricane of action unlike anything seen before midseason. Upward of 30 moves happened across the league over the past week and a half, changing the landscape of many teams, while providing plenty of sizzle to the steak of this year’s pennant race.

But with the dust settled and the new jerseys, lineups and rotations doled out, what teams came away with the most meaningful usage of this year’s general manager fantasy redraft? Several teams either resurfaced or rebuilt major parts of their immediate offerings, while others made some very smart tweaks that could pay out in a major way over the next two months … and possibly beyond.

Here is a look at the teams that made the most impressive changes by the last week’s trade deadline and the tactics they used to get themselves over.

The Jays mixed no messages about what their intents were over the past week. They see an opening in Wild Card race and intend to take it. And they did so by taking on the trade deadline in every way possible: through blockbuster trades with both short- and long-term impacts, addressing specific needs, and expanding what they already do well.

The headline deals of grabbing Troy Tulowitzki and David Price are rightfully the biggest waves of their voyage, but general manager Alex Anthopoulos continued to refine the overall potential of the team as well by getting a very capable leadoff hitter in Ben Revere and a veteran bullpen arm in Mark Lowe. The cost of doing such business did heavily impact the depth of their starting pitching potential, most noticeably pitchers Daniel Norris and Jeff Hoffman, but they were able to make a sizable impact on their immediate potential in an AL East that saw none of their contemporaries make any impressive moves to counter them. All in all, they at the least rented a top ace who is familiar with the AL East in Price to cap their struggling starting pitching staff, while also securing strong future pillars in Tulowitzki and Revere, who will continue to improve their potential into the next few seasons as well.

KC went into aggressive finishing touch mode by firing the first major shot of the deadline year in bringing Johnny Cueto over from Cincinnati. While the they had a deep rotation with a lot of steady options, Cueto gives the Royals the ability to match up with anybody’s game one starter now and makes them a much more capable big-game team. He is more than likely just a rental option, as he is pending free agency, but for a team that is all in for 2015, he is the best acquisition of the entire deadline.

However, GM Dayton Moore was not done yet, as he also grabbed the versatile Ben Zobrist, who will help round off their everyday offering in a variety of ways. He is capable of being a fill-in in left field as Alex Gordon heals, a platoon option in right for Alex Rios and a regular upgrade at second base versus Omar Infante. Another player with an expiring contract, Zobrist actually makes sense past just this run for KC as well. 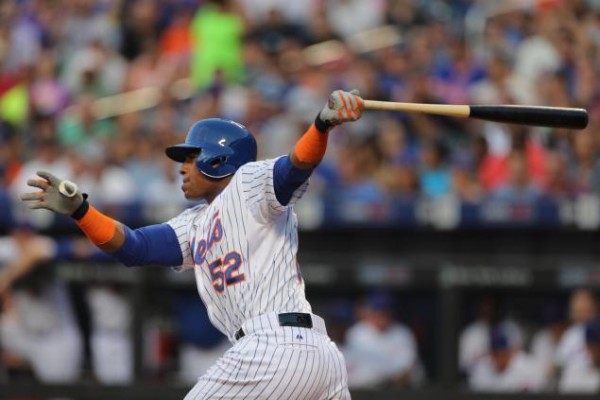 A mix of consistent play, hard-nosed survival and failure to create space in the standings by the Nationals has allowed the Mets to keep the National League East title within their sights. And they used the deadline to bolster their fortunes around their strong starting pitching staff and retool their struggling everyday lineup, as well as the back end of their bullpen.

With their first two maneuvers, the Mets added from former parts of division rivals. The additions of Juan Uribe and Kelly Johnson from the Braves provide both experience and versatility at a number positions. The move to bring versatile reliever (and former National) Tyler Clippard aboard gives them an experienced back end of the bullpen option for a bullpen that needed that one final impact option to pair with Jeurys Familia

It seemed as if the deadline would be marred by the swing and miss at closing the deal for Carlos Gomez with the Brewers, but at the last second they salvaged it by adding Yoenis Cespedes from the Tigers. The cost was a pair of minor leaguers, headlined by promising hurler Michael Fulmer, but the fact they were able to send quality pitching out yet retain their four-headed MLB future of Matt Harvey, Jacob deGrom, Noah Syndergaard and the injured Zach Wheeler is an impressive victory in and of itself.

After their scorching-hot start, the young Astros began to cede some space in the AL West and saw the Angels catch up to them. With an unexpected chance at the postseason within reach, GM Jeff Luhnow turned into both an ultra-aggressor and quick-working opportunist en route to putting the chest paddles onto his roster and rearming them for the stretch run both on the mound and in the field.

The first big move was landing hometown lefty Scott Kazmir from the Oakland A’s for a pair of minor leaguers in Daniel Mengden and Jacob Nottingham. In pairing Kazmir with All-Star Dallas Keuchel, he has a set of the most formidable southpaws in the American League.

However, the ever-attentive Luhnow acted quickly when the Mets failed to complete their trade for Carlos Gomez with Milwaukee. The Astros reached in to their impressively deep minor league cache for four strong prospects to snatch Gomez and pitcher Mike Fiers for themselves. In the course of two very different moves, the Astros once again became the strongest team in the AL West this summer.

No, they did not shake up the airwaves with a megawatt deal like some teams in the Wild Card window did. And potentially, if one was not paying attention to the finer details of the deadline, it may seem like the Bucs did not do anything that would land them on this list.

But nothing could be further from the truth, as GM Neal Huntington did exactly what a team that expects to be in the postseason, and that is far from out of its own divisional race as well, should do: He rounded off the rough edges. The first shot was to bring Aramis Ramirez back to town in a smart effort to bridge the gap in time while Josh Harrison rehabs and add a player who can be either a continued spot starter or a high-impact pinch-hitting option. The Pirates also added another lights-out option to the back end of their bullpen in acquiring Joakim Soria and finished up by bringing in lefty J.A. Happ to the fold as well, who has been notoriously hard on the division-leading St. Louis Cardinals in the past.

They proved that in the game of deadline chess, sometimes a few strategically placed pawns can make all the difference as well.