The most accurate way to describe the early trend of the Major League Baseball season is to call it the “Year of the Phenom.” There has been an all-out rush of clubs bringing their top prospects to the Majors this season thus far, with Kris Bryant, Carlos Correa, Byron Buxton, Noah Syndergaard, Joey Gallo, Addison Russell, Francisco Lindor and Joc Pederson headlining an incredible gold rush of future franchise cornerstones all making their debuts in the first half of this summer.

Several of these talents have delivered on promise immediately as well, with a few bee-lining their way toward All-Star appearances already. But this type of buffet of talent would lead one to think that the cupboard of brimming talent that could be displayed in the MLB Futures Game, which will kick off July’s All-Star festivities in Cincinnati July 12, could be a well run dry.

However, as the announcement of the rosters for the U.S. and World teams was made today, it's clear that is far from the truth. The MLB prospect pool is proving to be more of an ocean than anything, with each team boasting an impressive amount of talent still, some of which stands to make their impact on their respective clubs' postseason pushes to come.

So who should you be on the lookout for in baseball’s premier prospect talent show? Here is a look at a selection of the best — as well as the most intriguing — future stars to be on display on All-Star Sunday.

However, before we go too far forward, it is worth nothing that the game’s top prospect, shortstop Corey Seager of the Los Angeles Dodgers organization, is not appearing in the game again due to what appears to be a denial by the Dodgers' brass. Not quite sure why, since he played last year and is tearing the minors in half again (to the tone of a .313 average, 11 home runs and 20 doubles between the double and triple A levels), but it is what it is. 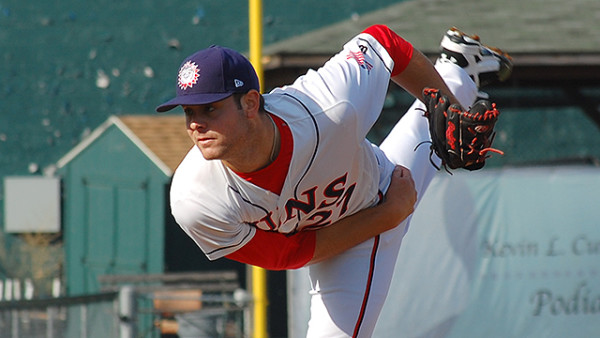 The Top Guy — Lucas Giolito: With Seager out of the mix, the spotlight shifts to a guy who is not too far behind him in potential. The fire-balling right-hander in the Washington Nationals system (as if they needed another) has struck out 57 batters over 43 innings at high Class-A Potomac, a year after running up a 10-2 record and 2.20 ERA over 20 starts at regular Class A. Much sooner than later he will be forcing his way into the perpetually stacked Nats rotation and assuring there is no let-up on their pitching staff stranglehold on the National League.

The Pure Talent — J.P Crawford: Philadelphia has become accustomed to having a shortstop who has a plethora of natural skills, combined with a flair for how to use them, in Jimmy Rollins. And although the franchise’s top all-time shortstop has moved on, the heir apparent is close and is the real deal. Crawford flashes some young Barry Larkin-like tools and will be a major part of the impending rebuild in Philly.

The Next Guy Up — Kyle Schwarber: Between Bryant, Russell, Jorge Soler and more, the Cubs' youth movement is in full (and most successful) swing. The thing is, they are far from empty still, with power-hitting catching (for now) prospect Schwarber on the way. While the team is undecided about whether he stays behind the plate or takes up an outfield post, the one thing that is certain is that his bat will play wherever.

The Familiar Name — Raul Mondesi Jr.: Those of us who fondly recall '90s baseball remember this name for being the power-hitting, rifle-armed, 1994 Rookie of the Year for the Dodgers. And while the senior Mondesi made a clear mark, it is his offspring’s turn now, albeit packaged completely differently than dad. The 19-year-old prospect is a switch-hitting shortstop who fits perfectly in the type of club the Royals already have established: good glove, fleet-footed and versatile. The 19-year-old is flashing good leather and swinging an ever-improving bat as an early debut Double-A level competitor.

The Man Out of Place — Trea Turner: Turner basically began his career as a stepchild of sorts. He was in the odd case of being traded before he technically could — the ultimate player to be named later. The 2014 first-round pick of the Padres was moved to the Nationals as a part of a three-way deal between the Pads, Nats and Rays. While he could not technically report to D.C. until this June (MLB rules prevent first-year draftees from being trade-eligible), he filed a grievance and was allowed to be shifted over to his new club early. Regardless of location, Turner has torn through Double A pitching, swinging to a .327 average between San Diego and Washington’s Double-A affiliates.

Mark Appel was drafted twice in the top 10 in two years, once by the Pirates in 2012, then again by the Astros as the top overall pick in 2013. Despite results so far as a minor leaguer ranging from awful to largely so-so, his marquee billing keeps him on a steady pace toward Houston regardless.

Alex Reyes is a flame-throwing Cardinal prospect in the mold of Carlos Martinez, who could either be a back-end bullpen highlight or a strikeout-running-up starter. He is learning to pitch more this year and assures the fact the St. Louis pitching pipeline will continue to be envious.

In a system that has spent big to add international talent to its ranks with the likes of Yoan Mercado and Rusney Castillo, and World Team organization mate Manuel Margot has a load of potential as well, but it is Rafael Devers who could pull a heist and be the best of them all. It will be him who ultimately assures a first base shift for Pablo Sandoval, because he is destined to make his way into the Fenway mix.