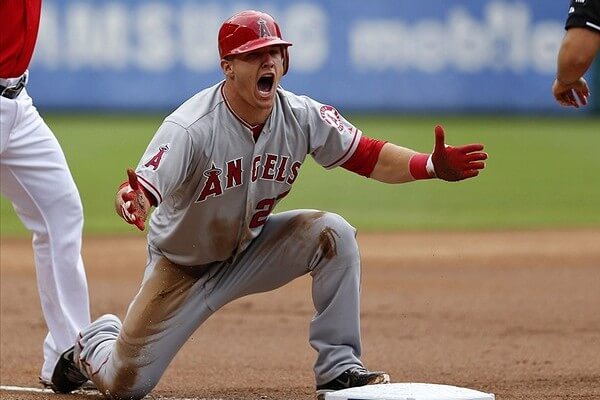 Opposing pitchers and managers already don’t treat Mike Trout like just any other 21-year-old, so why do the Los Angeles Angels think it is okay to do so? Control should never equal comfort, a lesson it seems could be learned soon in Anaheim.

Now, Trout seems to be a good enough guy. He plays hard all summer. He interacts with the fans and his teammates in a lively style that makes him seem more like the winner of a “ballplayer for a day” contest than a likely All-Star starter for the next 12 years. Hell, he even lives with his parents still back in New Jersey during the offseason and made a 60-inch TV his one extravagance during the offseason so he and his friends could have somewhere to hang out in peace.

But for all of that, there is the fact that he is not an oblivious man; he understands who he is. He knows that he is the franchise player on the Angels already, but he has been forced into making some concessions that centerpieces just aren’t supposed to be asked to make. In the young season, he has been forced out of his natural position and given a mere $20,000 raise for all of his odds-defying efforts last summer. Put this into perspective: a man who at 20 years old, in his first go around the Major Leagues, owned it to a level that he nearly put Miguel Cabrera achieving the Triple Crown win into dispute as being truly worthy of the league’s Most Valuable Player.

Yet a year later, suddenly everything has changed. All players aren’t created equal. For all of the discussion on WAR, replacement-level players and Trout’s impact above that level, to treat him as such at any point in his career is a dangerous move. Essentially, the Angels have taken the game’s reigning most irreplaceable element and made him into just that.

Despite his Gold Glove-worthy effort in the center field last season, he was moved into left field this spring so Peter Bourjos could handle the middle of the outfield on a full-time basis. Now, Bourjos is an amazing talent with the glove and the Angels have been trying to find a way to get him in the lineup on a full-time basis for years now, but that was in 2011 — you know, B.T. (Before Trout) — and a lot has changed. He became the best center fielder in baseball last season (where everybody from the MLB Network to myself here at TSFJ has basically agreed on this), and asking him to come off that after just one season, even if it is just part time, isn’t a good look. Tactics can’t reign supreme over intent.

However, that slight may be secondary to the decision that was made on his pay grade for the upcoming season. The decision was made that Trout would take home $510,000 this season (just $20,000 above the league minimum). This takes some wide-eyed perspective to fully grasp: He’ll be able to continue buying as many big screen TVs as his heart desires, but in perspective, it’s a slap in the face that’s only made right because it’s within the team’s rights.

For all of the excess of riches that Major League Baseball’s free market can create, young players are made to wait their turn. Teams have the option of fully stretching out a player’s journey to the open market over as much as six years from his debut. While arbitration hearings give the player some level of control on what he makes (David Price just pulled $10 million out of the Tampa Bay Rays), until he can reach an arbitration table, it’s basically take what’s given. Trout is scheduled to hit arbitration for the first time in 2015, which puts him and the team in a position to rectify this. The most likely option is that they buy out the entire arbitration situation with him with a generous early-career offer, such as the ones Evan Longoria and Adrian Gonzalez received. But once again, this isn’t just any routine time around the bases being considered here. And the more times Trout proves that, the more uncomfortable this current scenario will grow for all involved.

Money represents respect, just as playing to preference does. Coupling demotion on the field, with a few too many rungs left on the pay ladder, it is a tough stand to make. For all the confidence the Angels and owner Art Moreno have in Trout's understanding of his situation, their intent to treat him as an everyday player was warned against.

Trout’s representation made it clear that while a groundbreaking contract wasn’t expected, one above “replacement level” was. Time will tell if the Angels’ decision to treat the front of the uniform over the back of it backfires in this case.