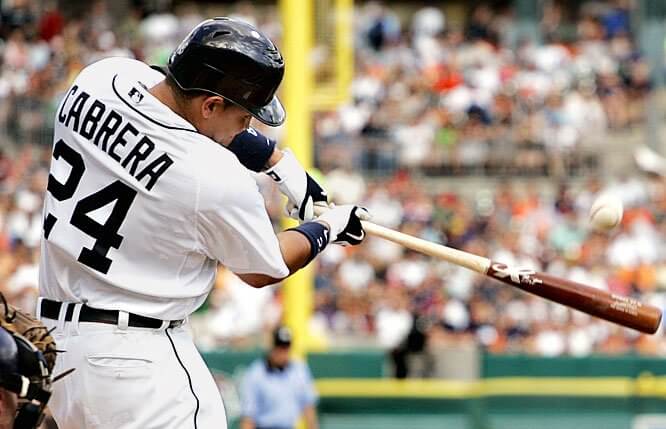 Earlier this week, I received a text from a friend who’s a fan of the Texas Rangers. She shot straight from the hip and asked me: “Is Miguel Cabrera on steroids? He did the Rangers wrong the other night, and I was like, 'Why can’t they stop this fool?'”

As I replied back explaining that he isn’t on steroids, and why he’s just an amazing hitter, it occurred to me that steroids may not even be a good enough explanation for what he’s doing. They can be tested for and stopped. With what we are seeing here, perhaps Kryptonite may be a better solution in this case.

At the very least, the terror alert needs to be adjusted to account for Miguel Cabrera.

It’s well-recorded what the Detroit Tigers third baseman done and where he stands in the game today, but what he’s doing this season so far is absolutely ridiculous. It’s very well possible that he’s on the way to having not only one of the greatest seasons of all time, but he’s on pace to become The One. That is, he may very well be perfecting the art of hitting.

The pedigree is there. This is a guy that’s somehow forgotten that it is possible to hit under .320, because he hasn’t done it in five years. He’s also somehow not realized that stopping at first base is an option as well; he hasn’t stopped short of 30 home runs in seven years. And what’s more, he doesn’t believe that sharing is caring when it comes to driving in runs; he’s only “failed” to drive in 100 runs once: his rookie year … which started in June, but he still brought home 67 and helped the Marlins win a World Series as well, as a sort of peace offering I suppose for his lack of production.

At any rate, he’s making his Triple Crown season from last year look like amateur hour. He’s on pace for 50 homers and build up an insane 198 RBI this year, seven more than the all-time record that’s stood up since Prohibition. To put it in perspective, he’s driven in 10 more runs than games the Tigers have even played in.

But why is this happening? This isn’t basketball or football, where LeBron James or Aaron Rodgers is going to get the ball and amazing is going to happen whether we want it to or not. This is baseball, home of the Barry Bonds rule where if it’s too dangerous, don’t touch it. Throw four way outside, and send him about his business. Wouldn’t it be easier to pitch around him or just not pitch to him at all? Well, no, not really. Not when Prince Fielder is lurking behind him, and when Torii Hunter is sitting in front of him. There’s a chance there’s already some trouble on base.

Because of these reasons, the nightmare for the American League is going to keep on to Freddy Kruger levels. There is nowhere to go with the man; if it’s thrown over the plate, he’s not likely to miss. His 26 strikeouts are 88th in the American League, but his batting average is .391, the best in baseball.

He’s got the security around him, and he's holding weapons of the most massive of destructive in himself. Miguel Cabrera may very well be the best hitter, in the best situation, that we’ve ever seen. And he’s going to get plenty of opportunities to prove it through this cruel, cruel summer on AL pitchers.