A blizzard touched down in San Diego last week at Major League Baseball’s annual Winter Meetings. In the course of three days, it seemed that all 30 general managers sat down with player representatives and had a huge fantasy draft, as many teams emerged with massive facelifts, while others sat and went back to the drawing board in its wake. Never have more moves been facilitated during a single session of the game’s meeting of the minds, but as the dust settled, Max Scherzer, the biggest fish in the open waters of free agency this year, still stood untouched.

How could it be that one of the game’s most emergent talents over the past three years is still hovering above all of the action without much motioning toward him? Scherzer has everything working in his favor on the field. The 2013 American League Cy Young winner, when he racked up a 21-3 season, led the league in wins and opened up the year 13-0, felt so confident about his breakout year that he turned down a $160 million extension headed into 2014.

That was the moment the fear that Scherzer was capable of producing stretched outside of just his presence 60 feet and six inches away from home plate, but also into front offices around the game. If he felt he could turn down $22 million a year, what exactly would it take to net the impending free agent’s services?

However, there was also the group that found this laughable and thought that he was foolish for turning down such a promising pact that would take care of him through the rest of his career. Why risk that, especially coming off such an ascension to the peak of the pitching mountain?

But for Scherzer, there was no doubt in the fact that his potential as both a player and therefore an earner had not peaked yet, so the offer would have no choice but to climb. And he set about proving in resounding fashion that he was correct in this assessment of himself, as he once again led the American League in wins, while setting career highs in strikeouts, innings pitched and making a second consecutive All-Star Game. He made a resounding point that he had not had a fluke bit of premium success a year ago. Rather, he should be counted among the league’s very best players.

Now Scherzer finds himself as the consensus best available player on the free market and has been privy to a fortunate situation to find himself upon. More so than for any other reason, he has cast an imposing presence over the course of stepping up to inquire on his services. He has raised a high bar to know where his expectations lay, based on what he already declined from his then incumbent club in Detroit.

There is the ominous presence of his agent, the oft-insatiable Scott Boras, to complicate the approach even further. When armed with a premium talent, his reputation is based on pushing the hardest bargain possible even further than it would seem imaginable.

His sights are unswerving on getting the best possible — yet often previously unimaginable — deal for his guy, and with Scherzer in tow he has quite the case to make him the highest paid right-handed pitcher of all time. 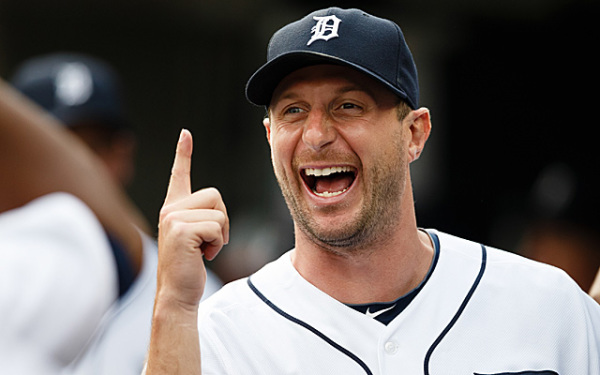 In the past year, Clayton Kershaw rewrote the book on what an MLB contract could be conceived as, while Masahiro Tanaka was awarded $175 million before he even saw his first spring training. In the more immediate sense, the greatest asset to his case is the $155 million that Jon Lester signed on for, which takes away the closest competition he had on this year’s free agent class.

Basically, all things considered, he’s about to break the bank in half as soon as teams stop kicking the tires on him and decide to jump behind the wheel. The picture on who will get involved is murky, but there are the usual suspects to account for. The Yankees have struggled with pitching depth for years and remain the big-money default in the game. It would behoove them to get in the mix both out of necessity, as well as having a clear lane to the negotiating table.

In that same vein, there are the Red Sox, who have spent heavy already this winter but are still a major cog in their rotation short of being able to compete at a high level in the American League. They have made multiple moves aimed at getting immediately back into the postseason, and if the opportunity is there to play the biggest joker of them all, they would be smart to chase it.

There are also the outlier clubs, the ones that nobody would peg to get involved with such a deal but decide to play big boy ball due to the rare golden carrot dangling in front of them. The Mariners became that team last winter in landing Robinson Cano and now are on the verge of pushing for their first postseason in 15 years. Certainly they could decide to get into the running and create a dynamic duo of Max and Felix Hernandez atop their club.

The White Sox and Cubs have been the most proactive clubs thus far this winter in reshaping their images, and both could decide to make a run at another definitive addition to their newfound potential. Conversely, the World Champion Giants have swung and missed on multiple free agents and could feel a sense of desperation to keep up in the rapidly developing National League West.

The Angels or Rangers are both in need of pitching and with a history of putting up big deals that are shocking (and even a bit irrational) at the time.

Maybe his hometown Cardinals get into the mix with a far-fetched but rational pull to lure him home to the team he grew up rooting for.

And of course there’s always the Dodgers, because they are always there these days.

Or what if all of the tour is for naught, because the entire free agent tour is just a big round trip voyage? The Tigers have publicly said they will not get involved in pursuing their former ace, but it would be in bad practice for Boras to not at least run the proceedings past them as they develop.

The bottom line is that while it has seemed eerily quiet around him, a massively diverse market has been growing constantly around him that has kept nearly every team within reason (sorry, Minnesota, Tampa, Oakland, etc.) — or at least somewhere in range to vie for him. The big picture has worked out to be a masterpiece: a collision of great timing, superior surroundings, a healthy market and a uniquely crafted place within it, the world of the most gratuitously spending sport today is at his feet, and by his own design.

Take notes, future free agents to be. Set the game up to play for you, not the other way around. Max Scherzer has rewritten the blueprint on creating value through both patience and confidence this year, and is about to cash out as a result.

8 Replies to “Molding The Market: All Eyes On Max Scherzer”