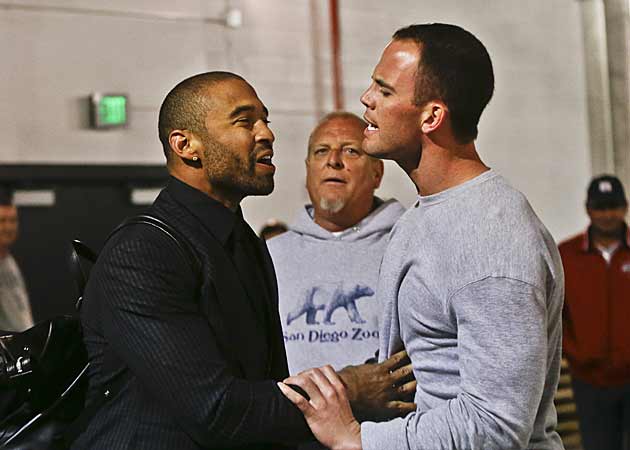 Usually when a baseball brawl breaks out, it’s the ultimate “you better get him” fight, where there’s a lot of jumping over shoulders, pointing and yelling. Very rarely is there an actual moment where something happens and you think, “Damn, it just got real.” The infamous Pedro Martinez-Don Zimmer discus throw and the Johnny Cueto flying sidekick come to mind, but other than that, it’s usually pretty tame.

But last week, when one of the more awkward scuffles in baseball in a while broke out, it was clear, there was no indifference coming from the best Dodger in about 20 summers. Matt Kemp did not take the superstar high road, which usually means being a peace broker and/or in-between guy. He was fired up in a manner that can usually only be seen from Triple H on Monday Night Raw. He was not about the games, and it showed. After pitcher Zack Greinke hit the Padres outfielder Carlos Quentin for the second time in the game, then goaded him out to the mound, only to fold up and take a full-on Shao Kahn running shoulder, Kemp was not about any words at all. Not only did it take the full veteran savvy of Josh Beckett to keep him at bay, he got fired up enough to get it started again not just once on the field, but after the game in the hallway as well. While there’s another six months of season to go, this for me will stand out as one of the most memorable moments of the season, regardless.

See, baseball’s main criticism is that it’s slow and uninteresting. Yet, when a pumped-up Kemp stepped up to the plate and nearly ran from baseline to baseline to try to get to the entire Padres team (and nearly threw hands against Pads manager Bud Black for approaching him as well), it got real in a way that usually Dana White only produces. Usually, the last guy you want on your team to be at it like that is your top everyday dog. The Dodgers aren’t the same team without Kemp, and putting himself out to potentially get what looked to be a “Malice in the Palace” type rumble on could have been bad for a long time. What if he’d gotten hurt, adding yet another crucial injury outside of the broken collarbone that Greinke took in the fray? What if he got loose and really tore into a Padre, and had to sit out for a week-plus? It’s a long season, but in September a few Kemp-less L’s could go a long way in telling the difference between them and the Giants and/or a Wild Card run. All things considered, it probably would have been a bad look for Kemp to have followed through much further.

But considering everything else, his reaction was right on time. It showed something that a team like the Dodgers very well could have lacked: heart. Plenty of times, when a team is put together like L.A. has been, in hurry and with a lot of big contracts, there’s not a lot of soul in them. They end up losing in the end not because of a lack of talent, but for a lack of the actual emotion and togetherness that puts teams over the hump in the end. Kemp showed a passion that will have the other 24 Dodgers follow him into the depths of baseball hell. Especially when it’s all for a guy that’s only worn the same jersey has him for about a month. It proved that it is the name on the front of the uniform that matters, and in the end the loss of its biggest addition could be the moment that raises the team up the most. It takes fight and some trust to make it over the hump, and Kemp may have singlehandedly done that in a way that never could have been made any other way.

Leadership shows up in some shocking ways sometimes.

4 Replies to “Matt Kemp Is Easily The Best Teammate Ever”