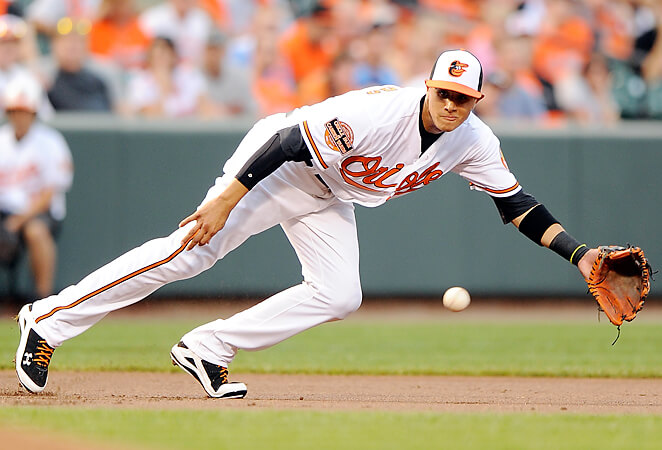 The best shortstop in baseball three years from now is already in the Majors and killing it with regularity now. It’s not Troy Tulowitzki, Elvis Andrus, Alcides Escobar, Jean Segura or Ian Desmond. It’s not even Jurickson Profar, who’s got even more buzz than the real owner of the title has. Maybe it’s because he’s not even playing shortstop yet that it is not as obvious, but the coming of age of Manny Machado has started well before he takes the crown that could be his for the next decade.

In the shadow of Mike Trout and Bryce Harper has stood a prodigy that is just as worthy of the praise of being as far ahead of the curve as possible for his age. The Baltimore Orioles (temporarily) converted third baseman is still two months short of meeting drinking age himself but is already among the best in the game. Yet it’s been a much quieter, yet perhaps more rapid, ascent for Machado. Mike Trout struggled his first time up in 2011 and was demoted. Bryce Harper had easily the best teenage season in MLB history a year ago, but there were understandably peaks and valleys.

Not with Machado. He was so good, so soon, the O's made room for him at 20, and he rewarded them by hitting his first two home runs a day later. This, as nothing else he's done since, should be much of a shock. He’s jumped the expectations fence each step along the way, and now he’s having the best season a 20-year-old has had since another top 3 draft pick native of Miami: Alex Rodriguez. The similarities between the young A-Rod and Machado are scary similar. Both were taken by clubs on the brink of contention, directly out of high school. Both shot through the minor leagues at a pace that belied their age, before forcing an early promotion to the Major Leagues late in the season before they blew up, and participated in a playoff run that same season.

Yet, it was the first full season where both staked their respective flags. Despite not being eligible for Rookie of the Year honors due to time spent up the year prior, A-Rod tore the American League in half his “first season.” He led the American League in hitting with a .358 season, hit 36 homers and also lead the league in doubles as well with 54.

Now fast-forward to today with Machado. With only just over 400 at-bats, he’s putting together the best season since A-Rod's precocious effort 17 years ago. In the midst of Miguel Cabrera’s epic season, he’s leading the AL in hits and doubles, while hitting .336 and leading the Major League’s in that oh-so-famous, not-so-completely understood, yet utmost important stat, WAR. And he’s doing it at a slightly younger age than Trout did when he set the world on its ear with the stat.

Basically, the point of WAR, or Wins Above Replacement, is to prove what player makes the biggest singular difference in wins for his team. And Machado has a chance to be that at a position where that is generally unheard of. He’s playing this well at third, a position that’s more traditionally suited for offense, but eventually he’s going to move back home to shortstop, and that’s when business is really going to pick up. Offense and potential like his at shortstop are what legends are made of, and Baltimore knows a bit about what a legendary shortstop can do. While he may not ever develop the raw (yet now slightly debated) power of A-Rod, he could be a much better shortstop for longer. How about a Nomar Garciaparra reincarnation that destroys the Camden gaps for the next 15 years? And if you remember anything about what Nomar was, then imagine Manny being that good already.

A first trip to the All-Star game is all but certain, a batting title isn't outside of the realm of possibility and him already being the best player on a playoff team from a year ago that's returned nearly completely intact is also fact. He'll be all of these things, plus the best Oriole since the one that went streaking for 16 years.

Maybe the future of baseball is nowhere near as decided as it was just a summer ago, because maybe the current isn’t even as clear as it seems it would be. Whether it’s Trout and Harper, or A-Rod and Nomar, things aren’t as they seem. What’s happening on the left side of the Baltimore infield is not any less impressive or any less promising.

“Manny being Manny” is about to get an overhaul. Don’t miss it.

4 Replies to “Manny Machado: The Worst Secret Baseball Is Keeping”