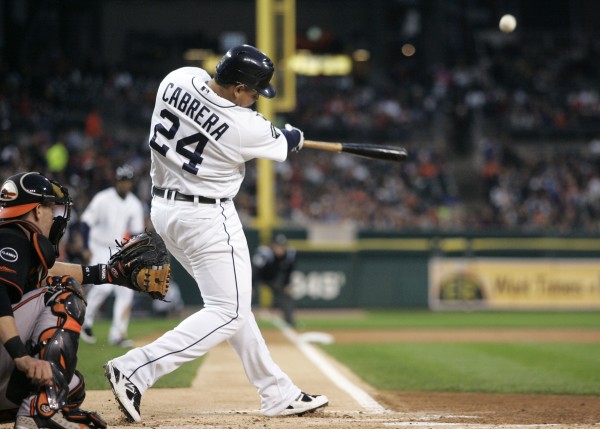 Three hitting achievements dominate baseball debates. Will someone ever eclipse Joe DiMaggio’s 56-game hitting streak? Who will be the next player to hit .400?

The Astros have a better chance at making the postseason than anyone has of accomplishing the first two feats. The third, however, is under real threat: When will someone lead the league in batting average, home runs, and runs batted in again? Who will win the Triple Crown?

As of this writing, Detroit Tigers third basemen Miguel Cabrera leads the league in both batting average and RBI’s. His 41 home runs trail Josh Hamilton’s league leading 42 by one.

Cabrera has a fighter’s chance at catching him, too. Hamilton’s Texas Rangers lead the Athletics by three games in the AL West. Even if they stumble, they’ll still reach the postseason, at least, as a wild card. As a result, Hamilton will likely see more days off as the season winds down.

Miggy, on the other hand, is in the middle of the playoff race. His Tigers currently sit on the outside looking in. With more opportunities to bat than Hamilton, and the Rangers advantageous hitting weather cooling off, Cabrera might just take home the first triple crown in 45 years.

The triple crown would culminate a splendid nine-year run by the Venezuelan. His consistency has earned him a perennial place in the best hitter in baseball debate.

In 2012, Cabrera has taken his game to new heights. His 41 home runs this year is a career high, as are his 129 RBI’s. If anything, Miggy has been the best hitter in an offensively challenged era.

Still, I can’t help but feel that Cabrera’s achievement would dim the luster of the Triple Crown. After 45 years of waiting, the crown would be claimed by a relatively mundane effort.

Of course this is slightly unfair to the third basemen; since when is .333, 40+ home runs, and 130+ RBI’s mundane? Cabrera has continued to rake over the entire season while others have faded. His slumps have been shorter, his hot streaks longer, his numbers more impressive.

However, consider that Carl Yastrzemski took the Triple Crown to an unattainable level when he won the last award in 1967. The man Sox fans affectionately call “Yaz” willed Boston, a ninth place club the year before, to the pennant. He famously hit .513 in the last two weeks of the season. On the back of his bat, the Sox emerged victorious from a four-team cluster. Yaz’s Herculean efforts immortalized the man. He cast an indelible shadow over all others who strive for triple crown supremacy.

Even before him, the award had serious merit. When Orioles great Frank Robinson was unceremoniously cast out by Cincinnati (perhaps racially charged, this was Cincinnati after all) following the 1965 season, he promptly won the American League’s triple crown in 1966. His Orioles would sweep the Koufax-Drysdale Dodgers in one of the more surprising World Series results in history.

Yaz and Robinson are only two of the many legends who have taken home the Triple Crown. Mythical figures like Mantle, Williams (twice), Gehrig, Foxx, Hornsby (twice), and Cobb have all accomplished the feat.

In the National League, Ducky Medwick of the 1930’s Gas House Gang Cardinals (our resident Cards fan, Matt Whitener can tell you about them) remains the last player to win the award in the Senior Circuit. While his name doesn’t carry the same cachet as the list above, Medwick did provide much of the punch (and the kick) for one of baseball’s most storied teams.

Should Cabrera win the Triple Crown while the Tigers overtake the White Sox in the AL Central, I might have to reconsider the tone of this post. In fact, his accomplishment might just solidify Cabrera’s place as a figurative and literal growing legend. The opportunity is there.