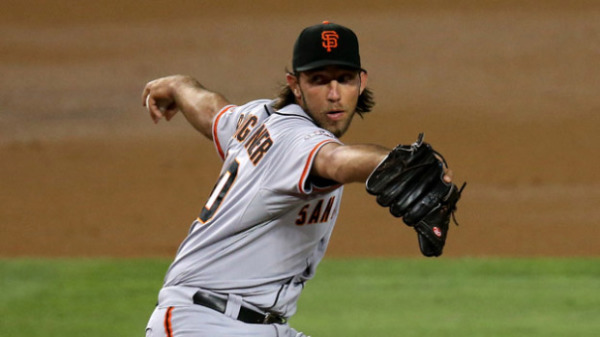 Orange and black envelop October once again. The San Francisco Giants won their third World Series title in five seasons on Wednesday night to remind everyone that pitching and defense can still go a long way in baseball. Although, in this case, pitching meant one man.

It's stunning to think about, but the Giants franchise can claim the two best postseason pitchers of all time and they came more than a century apart. In the 1905 World Series, Christy Mathewson threw three shutouts in a five-game victory over the Philadelphia Athletics. The year prior, Mathewson was denied the opportunity to pitch in the Fall Classic at all. His manager John McGraw refused to play what he felt was an inferior league.

What a notion. McGraw declared it; Madison Bumgarner confirmed it some 110 years later. Bumgarner pitched so well in the 2014 playoffs that writers, experts, longtime fans and those in love with nostalgia dove gleefully into their history books to put his performance into proper context. What they found is that the Giants ace now claims the lowest earned run average in World Series history among players with more than 20 innings pitched. Bumgarner completed the rare 15-out save in the 3-2 clinching victory three days after he shut out the Royals in Game 5. He gave up a single run in 21 innings against Kansas City in the series.

Bumgarner turned the high fastball into baseball's forbidden fruit. He tantalized the Royals' hitters with the pitch, only to turn his back when they inevitably whiffed at the offering. It happened time and time again and in a way that made it predictable. The Giants left-hander let loose, and Eric Hosmer, or whomever, flailed desperately at a pitch well out of reach and the strike zone. Dramatic irony, the playwright would call it, when the audience knew the outcome before the player involved.

On the rare occasion that fastball failed, Bumgarner threw the perfect breaking ball, a hard-dipping slider that teased the outside of the plate — death by two pitches, and a horribly depressing death at that. It wasn't just one man who went down; it was an entire team.

Bumgarner walked out of the bullpen in the fifth inning perfectly calm. He took his warm-up pitches. He stretched out on the mound. There was no outpouring of emotion nor a Hollywood entrance. He simply took the hill ready to do his job. Death comes at most of us quietly. It disguises itself in such a way that we don't see it coming. On Wednesday, that meant backdoor sliders and chest-high fastballs — nothing out of the ordinary but devastating all the same.

When it was all over, Bumgarner hugged his catcher Buster Posey. Pablo Sandoval squeezed the last out of 2014. The David of this year's baseball season, the Royals, was squashed by a Giant. Madison was his name; Goliath was his stature. He's joined the sport's immortals at 25. Rumor has it that the Grim Reaper will wear a number 40 Giants jersey for Halloween.

Related: The Changing Faces Of The MLB Postseason Is Best For Business