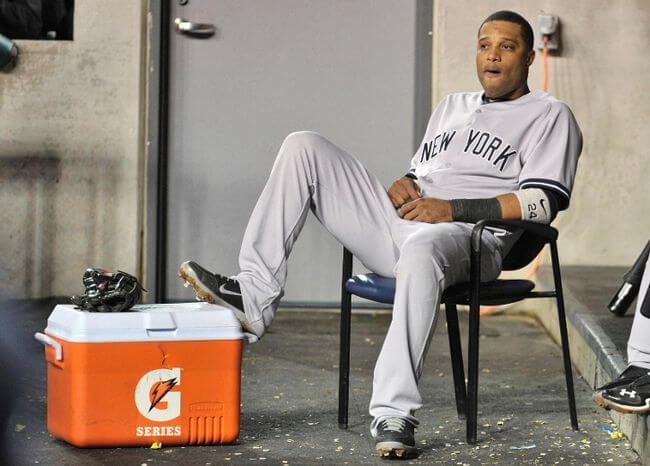 Robinson Cano is the biggest name in baseball these days…and he’s looking for a contract that proves it. The far and away crown jewel of the MLB free agent crop, he has requested $300 million for his services going forward, a number that even the New York Yankees have refused to address.

Well, to be more accurate, they have addressed and the response has varied from outright refusals to straight out laughs in the process. Armed with his new mega-name agent Jay-Z and his Roc Nation Sports agency, the mission is to make Cano the biggest brand in baseball, and to use the Yankees as the vessel to do so.

However, if this is truly the mission, Cano and his rookie representation need to come back to Earth and bring their demands along with them. There is no bigger platform in sports to take launch from than in Yankee pinstripes. And almost always, the Yanks are willing to do their part in making the biggest splash, with the biggest figures, in the headlines as possible. But when you put up a number that is so drastic that it is a non-starter with them, it’s time to realize the envelope has been pushed too far.

For Cano, he is facing a Yankee regime that has put its hand on the stove one too many times as is, and with the new collective bargaining salary cap restrictions, has begun to smell their flesh burn as a result. What is true is that they missed the playoffs for the second time in 20 years, and actually have a lot of money coming off of their still substantial books. And while Cano is an indispensable part of their organization, reality is what it is. They are already saddled with the worst contract in the history of written agreements in human history, also known as the Alex Rodriguez deal. On top of that, they have a declining CC Sabathia, aged Derek Jeter and injured Mark Texeira on the hook for another $150 million as well. The bottom line: they’ve got plenty of potholes to fill, and sooner than later will begin to dish some of that money that Cano is counting from himself out to the free agent crop that is full of players that work for them perfectly.

What is even worse is that if the Yanks can’t afford you, nobody else will be able to either. So while Cano’s team is trying to strum up other suitors, as their invitation-extended dinner with the Mets showed, there’s nobody that is going to ever cut that check. And if you cannot create a competition market, you’ve just got a dead duck in the water—even one that is in the conversation for best ballplayer in the business.

What will ultimately happen most likely is that Cano will get real, the Yankees will do their usual upsale, and everything will work out. But if Cano’s camp wants to have any hope of grabbing a few extra racks full of racks for their guy, get real and do it in a hurry. Or watch some new Yankee hitting around their guy cash checks that could have been his, right in front of their faces.

Here’s what else is going on in the world of sports as the day opens again:

It's Official: Outkast Is Reuniting --Consequence of Sound

Case Against Jameis Winston Was Halted After Victim Did Not Press Charges —Dr. Saturday

Jay-Z Is Trying To Sell Cano As ‘Michael Jordan, Not A Baseball Player’ —Hardball Talk