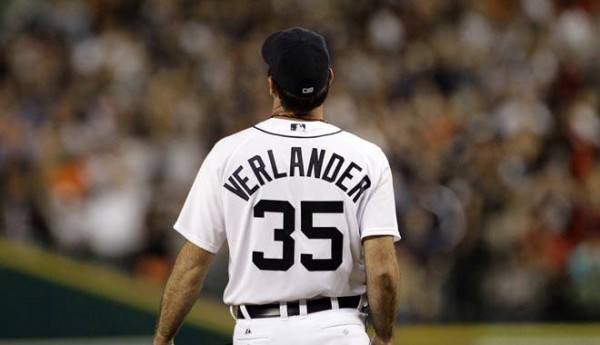 Time to say something rare, something that’s only been said six times in his last 46 games: Justin Verlander lost yesterday.

Granted, he only gave up two runs in eight innings and only got one run of support to work with, but it is what it is. The thing is though, that's often more than enough for him. See, the Detroit Tigers defending Cy Young winner is basically becoming a solid bet to make the impossible a possibility anytime he takes the hill. Last Friday, he nearly threw his third career no-hitter versus the Pittsburgh Pirates, which was broken up on top of the ninth flail of the bat that qualified as a single. What’s more is that this was almost his second no-hitter in the last 12 months, and second one broke up in the game’s final frames, which is utterly ridiculous. And really, that’s just the start of the filth that is Verlander.

In the last year, he’s done a hostile takeover on the title of best pitcher in the game. And he’s taken it from a surefire Hall of Famer, who has been at the very top of his game in Roy Halladay. There’s no denying that Verlander is on a throne of a pitching mound that nobody else has reached this level of in years….actually nearly ten of them, to be accurate. It’s been since Randy Johnson bulldozed his way to four consecutive Cy Young nods in Arizona that we’ve seen batters overmatched like this. He’s taken the bulldog approach of Halladay and added an eternal flame of fastball to it. If there’s an answer on how to derail him, it’s not one that’s being spoken of yet.

So what makes him so outstanding? There’s no break against him; for as long as he’s out there, he’ll have the same stuff all day. Pitch number one will be a 100-mile-per-hour fastball….and pitch #120 could be the same thing. To top it off, he’ll throw a terribly underrated curveball to switch things up, and if that isn’t bad enough, he’ll have the nerve to toss a change-up time to time, that’s roughly 20 miles per hour slower than his trademark fastball.

In the end, what gives? Is this just another supremely talented player that’s riding a brief high? Batters are smart; they adjust if given the time and find out ways to impose their will. The real story of why Verlander isn’t just riding the high that a 100 mph fastball and a pretty good team provide is within the numbers….which show he’s actually getting better still.

During his 24-win, Triple Crown season last year, batters overall hit .192 against him. Thus far in 2012, that number is down to .168, however, it’s gets realer. On balls hit in play, batters are only managing a .219 average, down from .236 a year ago. His groundball rate is up to 40%, so what’s being hit against him has a good chance of being played into an out over a drive into the outfield. Toss on top of the fact that he’s leading the American League in strikeouts again, while taking his walks rate to a career low, and you’ll see why the lack of success against him really isn’t anything to be surprised by. If anything, it’s a forecast for what’s to come.

History is random, and strikes as it sees fit. However, there’s a method to most madness, and what Verlander is doing is no fluke. So there’s a reason why last year’s monster season seems so ridiculous, because his coming of age is putting making him proverbial “Once in a generation” talent.

History has to be made sometime and doesn’t have to only be reflected upon later; take a look up to Detroit and enjoy it while it’s being made.