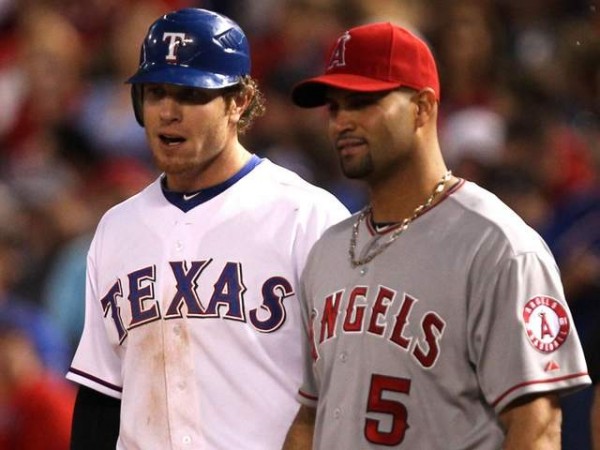 It’s been a spontaneous year in Los Angeles Angels baseball, first with the signing of Albert Pujols to kick off the year, then the coming of age of Mike Trout throughout the summer. Add in Jered Weaver’s no-hitter and the rent-a-gun trade for Zack Greinke, the only constant has been that the Angels have proven to be the biggest band on the run of them all. But Thursday afternoon’s deal may be the biggest splash yet.

Finally, the Josh Hamilton vs. free agency saga ended yesterday, and in a fitting way. The Angels swooped in for the second year in a row out of nowhere to throw a $25 million wrench in the entire free-agent scene, handing the ex-MVP a $125 million deal over a longer than imagined five years. But Hamilton won’t escape controversy by heading to a new location, rather he just adds to a fire that was already burning: the Angels’ borrowed time spending spree.

First of all, the Angels are a better team today than they were before. Any team in baseball that gets better by adding Hamilton. He’s one of the 20 or so best players in baseball and worth every bit of the dollar that he earned. Who do you pitch to now out there? Trout leading off is stress enough, but now way you almost have to challenge Pujols because throwing around him gets you Hamilton with two on and one out at best. Not to mention Mike Trumbo and Kendrys Morales looming behind him. With all of this considered, there’s some real long first innings in store this year for some poor AL pitchers.

But somehow, every baseball analyst has become a part-time insurance claims adjuster/AA rehab coordinator this winter, trying to assess why Hamilton isn’t worth much for long. And it’s true — the risk isn’t now; it’s later. The Angles owe Pujols and Hamilton a combined $381 million for a total of 14 seasons. That’s a lot of coin to owe out to two guys past 30 already, but in 10 years Trout will only be in his early 30’s so the cupboard will never be bare in L.A. The window to win is now, and that’s not lost on owner Artie Moreno, or his checkbook.

But since when did any $100 million deal not have some risk? It’s time to look past why he isn’t and see why he is. He’s a .304 career hitter that’s hit his 161 homers to the tone of one per every 17 at-bats. He’s got a batting title to prove he’s not just a home run sideshow and gets to extend his legs by moving to leftfield next to the most athletic centerfielder in baseball. All of this feeds into why there is no place that could have been better for him to land.

A World Series has never been won in December. Ask the Red Sox, Marlins, Yankees, Dodgers and Phillies that. There’s work to do to their pitching staff and still a season to grind out. But it’s time to sell the notion that paying out Hamilton wasn’t smart, for now. Play to win while you can, and by landing Hamilton away from the longstanding best team in their division, two potentially bad years, three years from now, are a lot easier to stomach for the Angels. And a couple of rough years from a high-risk guy that can land your club in the World Series are worth it.

On this date in 1975, @OhioStateFB running back Ar

Happy Birthday to The Miracle at the New Meadowlan

#OTD Michael Vick put on a legendary performance i

Baseball Fixing The Baseball Hall Of Fame, Via The Vote

A Sports Scribe Local Flavor: Why Your Team’s Hall Of Fame S…
6