I was asked a question last week about what I thought about how the tides have turned for Josh Hamilton. How a man that was being compared rather favorably to the better efforts of Mickey Mantle, among others, just a few months ago could now barely take a home at-bat without his own fans nearly raining down their disapproval on his recent downturn. This would seem impossible, right? An all-star starter, former MVP,that’s well in the mix for another this year? How could he possibly be booed in his home park? That should be reserved for fans whose cities he visits, and decimates, or you would think.

But what was pure gold to start with is starting to turn a little green around the neck recently. And it’s hard to blame Rangers fans for throwing their hands up. Since running out the gates to a .368 average, 21 homers and 57 RBI start to his year, Hamilton has staggered, hard. A .223/4/16 June was a big dip, followed by a bigger thud in July of .177/4/12, good for a 60-day total of a .202 average. That’s not very Mantle-like now is it?

Well, here’s the thing, like the good Rev. Paul Revere says, we don’t like to crown folks too early. I fully agree with that. It’s a guaranteed way to leave you standing at the altar waiting on a bride that was never going to show in the first place. In the case of Hamilton, he gives every reason to say the crown not only fits, but he’s the rightful heir to the throne the Mick sat on. However, in doing so, he’s put up against a legend, not the reality. Mickey was a man of many talents, yet many slights and streaks both personally and professionally. So perhaps that comparison of one to the other is the most comprehensive measurement ever.

Now let’s frame this some in the big picture. We’re discussing a guy that is leading the American League in RBI for a first-place club that’s basically guaranteed to walk into the playoffs. So what’s REALLY the problem here?

Nobody has lived a baseball life more on the edge than Hamilton. He’s battled everything that can possibly be combated in a career and a life nearly. He’s acknowledged that personal struggles with tobacco have contributed with his mind-set and struggle to regain focus during his two-month dry spell. What started as a slump turned bad when he lost patience with waiting for his pitch and started swinging at nearly everything to try and fix it. When nothing worked, personal demons awoke. This shouldn’t be a surprise. That’s the nature of struggle; it’s rarely isolated. However, knowing who he is and what all can work against him, why in the blue hell would you make the walls close in on him even further by booing and harassing him during these struggles, Ranger faithful? There are some folks that will work with, but there’s some that would be better off not being piled up on. This is the captain of that club. 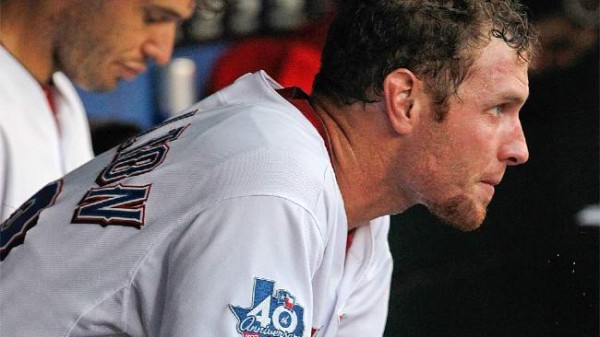 Another thing that happens more regularly than breathing is that those that lay the crown don’t realize that by placing one of gold upon the athlete, they are also placing one of thorns on themselves. Expectations of constant excellence cannot be met, so when there is a dip, it becomes a crater. The thing is, it’s August and things aren’t so bad for the Rangers really. Yeah, they aren’t the unquestioned best team in baseball they were when Hamilton was rapping everything over the fence in May. But that’s as much his fault as it is their pitching collapsing, the Angels finding their form and several other Rangers having down years. Basically, it’s not all his fault, and while he’s the best player in the uniform, there should be a huge “Handle with Care” label on the front and back of his jersey, especially in times like this.

Context is everything. It isn’t October, and the Rangers are still leading the pack by five-plus games in the West. Was the streak bad? Absolutely, I’m sure it felt endless, and it didn’t help that he was swinging at everything thrown at him. But was the failure Hamilton’s alone? Absolutely not. The failure has to be shared by those that placed themselves in a position to not accept disappointment. The real-time, ease-of-access demand of the world has seeped so far into sports that even the foremost talents in the game can’t stray too far from nonstop excellence without being deemed the solo problem. It happened to Josh, it happen to Albert Pujols, it’s been happening to A-Rod for years, and it sadly will continue to go on.

Don’t let your eye for the game pay rent in the moment. Because guys like Josh will make you eat it every time. WAIT (which is apparently a new concept somehow) and see.

3 Replies to “Josh Hamilton, Summertime Struggles And Being A Prisoner Of The Moment”