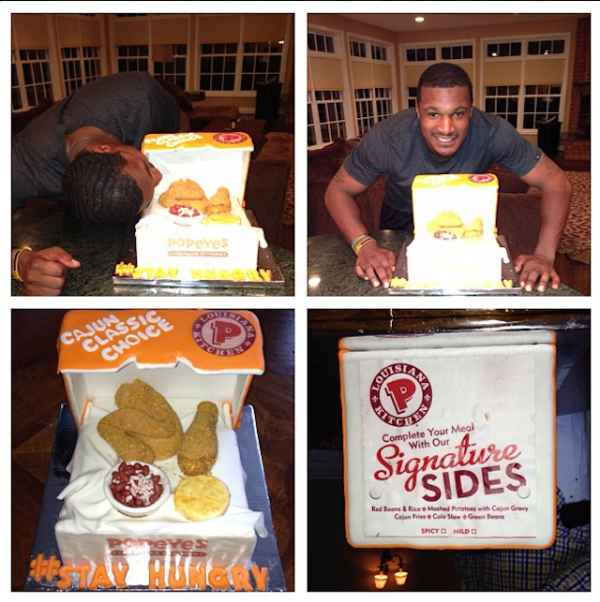 Last week, Adam Jones of the Baltimore Orioles got a Popeyes cake for his birthday, and sure enough, I've decided to associate myself with Popeyes, several people alerted me to this cake via Facebook, Twitter and email, including the editor-in-chief of this site.

This was cool and all, but when I saw this article call it "the most impressive cake I have ever seen," frankly, I felt a little defensive, upset even.

You see, last year when I turned 28, my girlfriend-at-the-time-and-now-fiancee had a surprise birthday party for me. I usually hate surprise birthday parties, because for a two-year stretch, everyone I knew did one. There was also one time when I tried organizing a surprise for someone only to have a friend accidentally forward an email chain discussing it to that someone two days before the actual party. I've been surprise-party scarred, but when you walk into the door of your condo and all your friends are there to greet you, well, selfishly, you love surprises all over again.

We ordered about 200 bucks of Popeyes for 10 people or so and had a ball in the party room of my condo. But the best thing of all was when the inevitable surprise birthday cake came out. I mean, look at this: 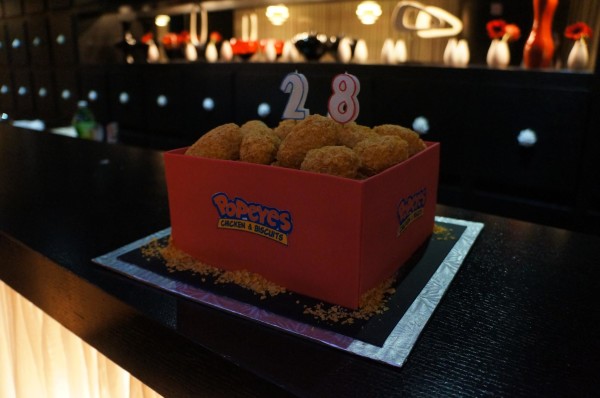 I'm probably biased, but that's worthy of most impressive cake you've ever seen status, at least in the Popeyes category. Come on, scroll back up to compare mine with Adam Jones' — it's no contest … not by unanimous decision, not a standing eight count; no, this is a first-round TKO.

And since we're here now and I've just filed this post under "uncategorized," allow me a few more Popeyes thoughts. Lately, I've started to vary between ordering the spicy and the mild chicken. I find that even though the spicy option is the go-to, when you're going two or three pieces deep — especially when they don't disrespect you and give you a wing — the mild is much easier to stomach as you go. Also, the biscuit used to be cool, but now I'm kind of sick of it. Again, this is not a critique of the quality of the biscuit. It's just a by-product of overconsumption.

If we're ranking sides, the mac and cheese is at the top of the list for me, although depending on the Popeyes you go to, the quality of it varies. The fries are obviously a safe choice and a honorable mention to the mashed potatoes as well.

I had this debate — mostly with myself — a few weeks ago about ranking the three pieces of a three-piece meal at Popeyes in order of satisfaction. I think the general consensus — after consulting with myself — is that the first piece is the best; you can't top that first bite. There's a Popeyes just five minutes away from where I currently work, and every Friday, I go there by myself at lunch, order a three-piece, sit there in peace and enjoy my meal. I know that sounds incredibly sad, but it's actually the thing I most look forward to each week. Now that part's a little sad. But there's a whole week of anticipation put towards that first bite, so you can't top the first piece. In order of satisfaction, the conclusion is: first piece, third piece, second piece. At this point, I'm just hoping this paragraph stays and this post actually is allowed to be published.

Lastly, I want to share with you guys a funny, very time-consuming and not very important story about my "relationship" with Popeyes. So last year, I decided to write a series of sports-related blog posts about Popeyes, tackling important subject matter like Delonte West's version of a romantic evening, Floyd Mayweather's diet and the Red Sox's fried chicken collapse. After every post, I would post them on the Facebook page of Popeyes Canada, and they, being PR people, liked the status and said kind words about it.

But that wasn't enough for me. Because sometimes you find yourself in these weird creative zones where you think the ideas in your head are way better than anyone else's, I recorded a series of hip-hop songs by remaking the lyrics so they were all Popeyes-related. I posted my remix of Drake's "Fireworks" on their Facebook wall (you can listen to the full version here; yes, I can't believe I'm sharing this with the public either. Actually I'm lying. I really loved these. I have a whole album called "Watch The Bones" that remains unfinished. It's "Watch The Throne" songs with all Popeyes-themed lyrics). Unfortunately, I left a few swear words in the song, and I got this email from the Popeyes PR people:

For three days, all I saw when I closed my eyes was "please maintain your level of awesomeness." After this email exchange, they became aware of just how aggressive and persistent I was on their Facebook feed, so eventually they made me their "Fan Of The Month," and sent me a bunch of cool but ultimately useless goodies. So yes, if you have been looking for a water bottle with the Popeyes logo on it, I'm just a tweet or email away.

And after that, it completely worked because I lost all my motivation to post on their Facebook wall again. There was no point, although I'm not sure what the original point was besides wanting their attention for no apparent reason.

So yeah, a very long-winded way for me to say: Adam, I'm really happy for you, and I'ma let you finish your cake, but I have the best Popeyes cake of all time.

My cake is my cake.

7 Replies to “Important: Adam Jones' Popeyes Cake Is Not The Best”