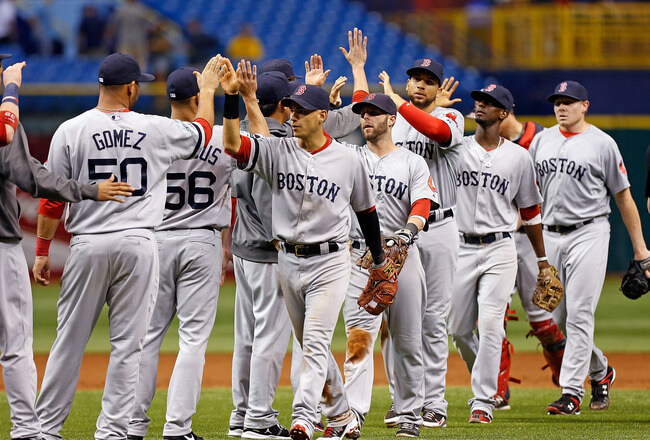 This wasn’t supposed to happen.

Between the grand “everything must go” yard sale of its 2011 offseason haul at the trade deadline last August to repeated injuries and two embarrassing manager firings in two years, it seemed the only thing of any dignity left standing for Boston was the Green Monster.

But that all has changed in the early going this season, because the Red Sox learned from their losses. Baseball is not like the NBA or NFL; you cannot spend your way into winning right away. All of the big names in the world can come together, but if it’s not the right mix on each level, it means nothing. If this was possible, the Yankees would win the World Series every year and the Blue Jays wouldn’t be swimming with the AL East fishes right now. If there’s some talent, there’s a way, and if there is some heart, there’s the rest of what’s needed. Bring the two together and you’ve got teamwork synergy heaven. Somewhere along the line, the Red Sox became one of baseball’s smartest organizations again and built one of the best rosters in the league.

Basically in one winter, the Sox became the blueprint on how to rebuild on the run. It was a gradual process that they decided they wouldn’t wait out any longer.

As is the case with many successful teams of recent history, Rome began to crumble. Plenty of teams hold out hope that their signings are going to work out for too long (see the current Phillies and Yankees for examples) and end up ultimately dying by their own swords. The Red Sox didn’t do that. They let some legitimate talent move on, many of which were franchise mainstays like Kevin Youkilis, Jonathan Papelbon, Jason Varitek and Josh Beckett, as well as some recent investments that didn’t fit the plan as well (Adrian Gonzalez, Carl Crawford, Cody Ross, Marco Scutaro), and went back to the drawing board.

But they didn’t go back to it the same way they left it. Instead of trading punches atop the big-money free agent board, they filled holes in a reasonable manner. The biggest problem the team faced was a lack of chemistry as well as wilting high-paid talent. With still productive veterans such as David Ortiz, Dustin Pedroia, Jon Lester and Jacoby Ellsbury in tow, being tactical in filling out the roster was the task at hand, and they used the entire field of the winter player pickings to do so. In Mike Napoli, Shane Victorino, Ryan Dempster, Koji Uehara, Stephen Drew, Jonny Gomes, David Ross and Joel Hanrahan coming aboard, the Sox spent a total of $107 million(total), which is $26 million less than the Angels paid for Josh Hamilton's services for the next five years alone. Yet the results are as night and day as possible thus far. The Red Sox rebuilt their entire team and have the best record in baseball through the first month and half of the season. Meanwhile, the Angels are muddling in the swamp of the AL West for the second consecutive year, with both a $139 million roster for just this year and a 11-21 record, the exact opposite of Boston's.

These two teams are headed in the opposite directions quickly, but only one of which was applauded, and even feared, for what it accomplished in the offseason. The Red Sox learned from their losses, while the Angels did more of the same from last year. The Sox climbed up, playing tactical ball in the winter, while the Angels, as well as the Dodgers and Blue Jays thus far, slid down chasing the single “big deal.”

What’s more in Boston is the Sox finally brought in a proper conductor to keep the train on the tracks. In their biggest trade of the season, they didn’t acquire a talent that will ever take an at-bat or throw a pitch for the club. Instead they reacquired the services of John Farrell, their former pitching coach, via a trade with the Blue Jays. After the tar and feathering (or beer and chickening) that ran Terry Francona out of town, as well the debacle that was Bobby Valentine, something had to give. Bringing back a man familiar with the backdrop and personalities of the mainstays of the club was perfect, and the results are showing it.

It’s a long season ahead, and there’s no doubt going to be a fight to stay with pole position in baseball’s best division. But the Red Sox have what it takes to not only fight, but to cruise as well. And in a sport that’s littered with overpriced yet underperforming headline clubs, the quietly reloaded yet hyped-deprived Red Sox have proved it is possible to be more successful on page two than at the top of the bill.