The original script for the return of Alex Rodriguez was supposed to be something akin to Cersei Lannister’s stroll through town on the “Game Of Thrones” finale. Crimes announced, stripped down, “shame” bell rung, the whole shebang.

But instead, something else completely happened: A-Rod somehow came out on top. In the push to make sure the point was hammered home that he was to be treated as hostile as possible, he became over-vilified. People actually began to feel sorry for him, and as he continued to surpass milestone after milestone, the villain stole the show in a fashion that we have not seen since the days of Reggie Jackson in The Bronx.

As the people got behind him, he honored their recovered conviction by putting on a vintage display of the play that made him one of the most incredible blends of talent ever seen over the past 19 years.

But it is this truth that's both the remarkable and frustrating thing about Rodriguez. He is so talented that he has come back from a year and half on the pine and been one of the most impactful players in baseball this year. The Yankees are a factor again for a number of reasons — good health, better defense and more consistent pitching are the most important details of the bunch — but the resurgence by Rodriguez in the middle of the order is unquestionably the engine behind it all.

It all fuels into one of the most aggravating outcomes about his tactics over the course of his career. The spotlight pulls of the record contract hauls, as well as the unflinchingly unapologetic forays through the PED scandals, have permanently left him a marked man, but there is another level of anger that follows Rodriguez as well. There is the ever-present idea that he never needed to cheat in the first place, which has ultimately brought so much conflict and disappointment to the career that is touching so many incredible heights now as it winds down.

This is a man who won a batting title in his first full season as a 21-year-old in Seattle, a guy who redefined what it meant to be an offensive force at shortstop in Texas and then continued to win more MVPs after shifting to third base. Six-hundred home runs, 3,000 hits, 2,000 RBI — all of the gigantic marks he has met since have been dwarfed by the fact that he was simply an unapologetic, self-dependent asshole the entire time. 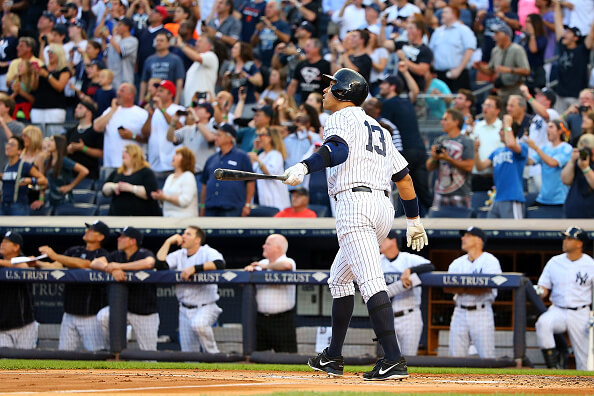 But because of these missteps, Rodriguez is now a man on his own island of achievement — one that he cannot stray too far away from — because the walls built up around his fortress of solitude are permanent and he likely enjoys it that way. It is that element of isolation that has made his resurgence so unique to watch because it has the elements of both turning his nose up at his detractors while also proving himself to still be a supreme and nearly unmatched natural talent.

He almost always now seems like a guy who is just doing the job because he seems almost uncomfortable being in the spotlight. Even when he celebrated with his teammates and acknowledged the crowd after the 3,000th hit (which of course he pulled off in the most grandiose manner — a first-pitch home run off of a potential Hall of Famer in Justin Verlander), it was more like Rodriguez went through the standard motions of what one is supposed to do after reaching such a milestone: hug teammates (even the younger ones he likely has no relationship with), hug the manager just a bit longer, and then come out and salute the crowd.

But it was not a long or drawn-out event as one would expect from such a lifetime achievement type of moment. It was over and done with quickly, and business continued on with Mark Teixeira’s at-bat. Yet regardless of the condition, it was a remarkable event to behold. That's because this type of achievement is a time to truly test the temperature of the heat on the game’s greatest villain, but to also see the type of undeniably rare event that's natural to cheer for but just cannot be cheered for so many reasons.

Now on the other end of this all, there is still the oddly, undeniably, grudgingly accepted respect and even remorse that is lifting up this current incarnation of Rodriguez. This is a man who has done a few men’s worth of wrong, but an overexposure to the push to drag him further down, combined with the undeniable impact of his pure impact on the baseball field — both current and historical — has made him at the very least an anti-hero now.

There is truly nobody more unique — or with a more cat-like stash of lives — than Alex Rodriguez, as he continues along his unbelievably true journey through the game. Maybe it truly is time not to forget but at least FORG1V3 and enjoy the renaissance.