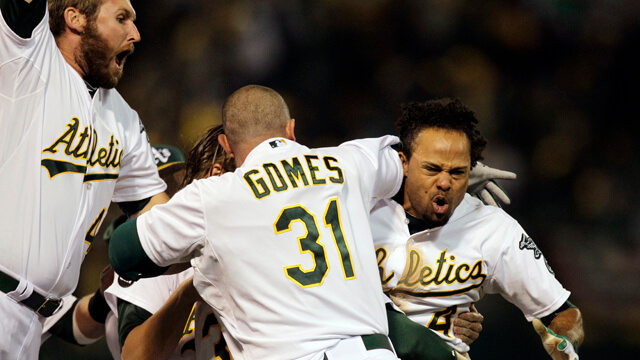 I suppose it takes a team like the Oakland A's to keep us up past our bedtimes.

With the Athletics headed to the bottom of the ninth inning Wednesday night - or Thursday morning - I glanced at the online stream. The alarm comes early on Thursday, I needed to go home.

There's something about sports - notably playoff games in sports - that keep you up a little bit later. Well, why not see if Oakland has a comeback in them?

At the very least, I'm seeing the end of the season that defied the conventional. Down to three outs with a measly four hits on the night, it was Detroit's night to shine.

When the TBS cameras panned to Detroit president, CEO and general manager Dave Dombroski, I chuckled.

After their unbelievable final stretch, this year's Athletics built themselves into a metaphor in my crazy  mind.

In my mind, Major League Baseball was a black-tie affair. A cocktail party with old men in tuxedos. Maybe even shirts and ties. Either way, the aristocracy of the league was out in full form.

Even the younger crowd of Baltimore and Washington showed up in whatever they could scrape together to fit in.

Then, there are the Oakland A's. The Athletics show up and crash the party. Despite causing a stir at first (do we throw them out or call the cops?), the A's are allowed to stay.

They are nobodies. They are has-beens. They are a group of grungy and bearded guys with jeans and ACDC t-shirts on. They talk too loud. They have no manners.

And, they don't care.

I felt like the A's turned the party into a party. The pandemonium in Oakland spilled over into the households of anyone watching.

When I saw Dombroski, I thought of the guys at that party before Oakland busted down the door.

Dombroski (who is a great guy, by all accounts) looks like Dan Quayle. As the camera pans to him, he chuckles in a conversation with a lady next to him. His ticket is about to be punched to the ALCS. Of course, the grungy, fun-loving nobodies have no shot to derail that.

In a decrepit old stadium that houses two sports - and neither sport adequately - the A's faced Valverde.

Josh Reddick and his long, grubby hair fought through the lead-off at bat. He muscled a single just under the glove of Detroit second baseman, Omar Infante.

The crowd stirred. They tried to egg on the A's, the same way we egg on the crazy guys at the party to light things on fire or hit on the pretty girl across the room.

Next, Josh Donaldson crushed a ball to the never-too-far away left center wall. Second and third, no outs.

The crowd was loud. So loud, in fact, that I was fully awake and goose-bumped.

Smith intelligently took second on the play. He stretched the play beyond what anyone thought it would be.

He set the table.

Coco Crisp, a player who I thought was done a couple of years ago, stepped in. Crisp saw one pitch.

He hit the ball in a way that I imagine it would be hit if all the noise in that old, ugly coliseum was behind it.

Oakland was partying. They keep partying. As with anyone who lives in a dump, they find a way to get used to it. For all intents and purposes, at least it's their dump. And, as long as you aren't from Detroit, you're allowed to party there too.

Somehow, the A's keep crashing the party with their old tennis shoes and dirty clothes.

In a game of big names and old men, Oakland turns up the music. I had to go through the box score to see if I remembered the players correctly. In baseball, that's  somewhat uncommon.

Dombroski left Oakland Coliseum a loser for the second night in a row. Thursday night, he might go home a winner.

No matter who wins game five, the party was fun while it lasted.

Bedtimes be damned. A cup of coffee in the morning will make staying the extra minutes until Wednesday's last call worth it.

Four hits through eight. Four hits in the ninth.

Oakland keeps finding a way to keep the party going. And they don't care if anyone thinks the music is too loud.

One Reply to “For One More Night, The Party Goes On In Oakland”