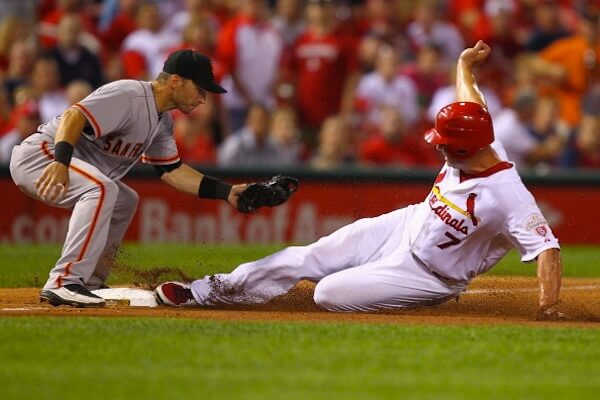 Over the past four years, the destinies of the San Francisco Giants and St. Louis Cardinals have often run parallel. When one team was not winning the National League crown, it was the other doing it instead. Yet for the first time since the Giants' classic comeback in the 2012 NLCS — and the Cardinals' equally epic collapse — they are preparing to meet again for a trip to the World Series.

To take a look at this, we brought together two of TSFJ's scribes with particular interest in the series, Bay Area representer Phillip Barnett and St. Louis' own Matt Whitener,  to break down exactly why there is plenty to fear in the uncertainty that lies ahead over the next week for each fan base.

Leading off, Phillip Barnett's view from the West:

The Cardinals Are Terrifying

I’m not exactly sure how one can quantify terror, but if there were such a spectrum of measurement, the Cardinals would sit comfortably on one of the extremes staring down at, well, Giants.

It’s not easy to pinpoint where the terror begins. One can ostensibly begin with their rotation. Since 2009, Adam Wainwright has seven different starts against the Giants in which he’s pitched at least seven innings, given up fewer than three runs and walked fewer than three batters — including his last start against the Giants when he went 7.2 strong, giving up no runs with a strikeout and two walked batters.

Lance Lynn is less terrifying, as the Giants have historically gotten to him, including twice in the 2012 NLCS. But still, he’s perched on that damned terror spectrum with the rest of this team. You have John Lackey, who pitched a very solid Game 3 against the Dodgers (and was the Game 7 starter of the World Series that will not be discussed). So much terror in that one. Shelby Miller is now a thing, and that terrifies me to no end.

The Cardinals’ bats are also cause for concern. This is a team that did not hit for very much power during the regular season, yet hit seven home runs during their four-game NLDS win over the Dodgers. Matt Carpenter’s three home runs in that series weren’t entirely a surprise, as he’s a guy who has seemed to love Dodgers' postseason pitching more than anyone else. But Randal Grichuk (who?) and Kolten Wong (how?) both with huge dingers against Clayton Kershaw and some schmuck out of the bullpen? That’s real cause for terror.

The Giants will head into this series without all of the heroes who helped lead this team to the 2012 World Series by defeating these Cardinals. Gone is Marco Scutaro, the 2012 NLCS MVP. Gone is Angel Pagan, who played a masterful centerfield and was phenomenal in the leadoff role. Gone is Barry Zito, who didn’t allow a base runner after a stressful second inning in a must-win Game 5; he scattered a few hits and didn’t allow another runner to reach third base.

The Giants shouldn’t be here. Pitching hasn’t been great this season, the bats still haven’t really shown up in the playoffs, but here they are, in the NLCS in an even year, against a Cardinals team that is making its fourth consecutive trip. The last two didn’t end well for the Cards, and tthat is the most terrifying part of all of this.

This is a team that’s focused on accomplishing what it wasn’t able to in the last two seasons, and sports usually have a funny way of rewarding the teams that come back stronger from devastating losses. This is a very good baseball team with solid pitching and a lineup that will grind out some good at-bats. They’ve been here before, and that’s terrifying. 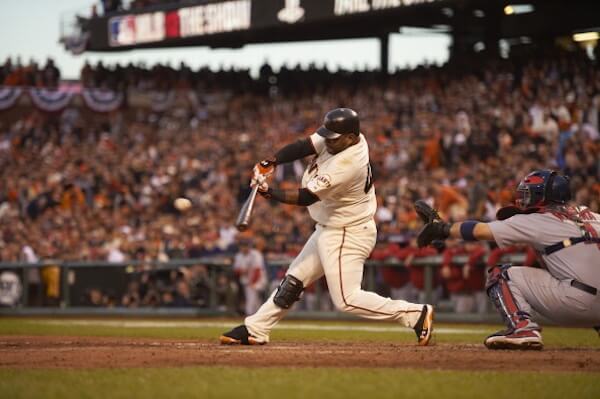 Surely There Has To Be An Easier Way To Do This, Right?

Over the past four years, the St. Louis Cardinals and San Francisco Giants have owned the National League when the chips are down. The Giants have taken the even years, 2010 and 2012, while the Cardinals have been the prohibitive oddballs in 2011 and 2013. However, the upper hand when the unstoppable force has met the immovable object has gone to the Giants, who overcame a 3-1 deficit to snipe the Cardinals from behind in the 2012 National League Championship Series to move on the World Series, which they went on to win as well.

Since that time there has been a change in the way that I see that team. It wouldn’t be fair to call the Giants a rival, because there is no true ill will against them. Rather, it is a mutual respect of the highest tier, because for everything that is usually seen as an advantage for the Cardinals, it reflects in a mirror image back at the Giants. It is the ultimate situation of splitting hairs to find an advantage, and when it breaks down that far, anything can truly happen.

Above all other things, the Giants' resilience is to be respected. It does not matter the name on the back of the jersey (which is good, because they do not list names on there anyway), but who is charged with what responsibility. This is also a strength of the Cardinals, to embrace the “next man up” mentality, but it is nearly nullified by looking their carbon copy in San Francisco in the face. This is a team that lost many of the heroes of its previous October run throughout this year in Matt Cain, Angel Pagan and Marco Scutaro, yet it barely skipped a beat.

Any strength that is offered nearly has an immediate response in the other dugout. There is Yadier Molina, and then there is Buster Posey. There is the front-line rotation strength of Adam Wainwright, Lance Lynn and John Lackey, but it is met eye-to-eye with Madison Bumgarner, Jake Peavy and Tim Hudson.

Perhaps the Cardinals could gain an advantage through veteran presence in their lineup? Surely hitters like Matt Holliday, Matt Carpenter, Jon Jay and Jhonny Peralta can find a way to break through against the San Francisco arms, right? But Pablo Sandoval, Hunter Pence, Brandon Crawford and Gregor Blanco have all been here before too.

Maybe a youngster like Kolten Wong or an emerging power source like Matt Adams makes the difference? But can they beat Joe Panik or Brandon Belt in making a bigger one first?

In the end, the game of inches comes down the finer points, and perhaps the scariest advantage that San Francisco has is a guy who won’t swing a single bat or throw a pitch at any point. Bruce Bochy is the chess master of all managers, putting his pawns, bishops and knights into seemingly the perfect place for scenarios it would not seem that he could create, let alone manipulate, yet always seems to. He is the greatest asset that the Giants have, and perhaps the greatest challenge that awaits the Cardinals is overcoming his mastery of moment.

What awaits is a series with very few true advantages and two teams that will not be able to wink without seeing it matched right back at them. And in the end, it may just come down to who can blink the fastest.