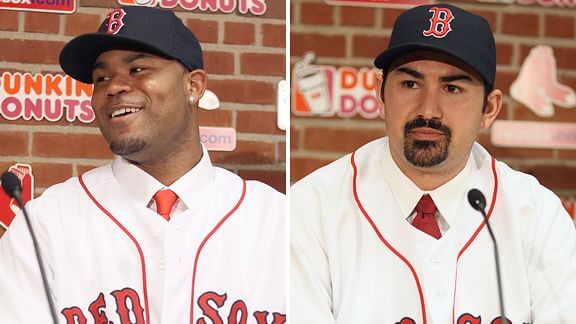 There’s failure, then there’s what’s been going on in Fenway Park for the last 500 or so days. Not even two full years after their stunning spending spree on the biggest names on the market in Carl Crawford and Adrian Gonzalez, the club is getting a face lift that even Harvey Dent would cringe looking at. The malfunction of the entire system around the Boston Red Sox makes this next statement resoundingly true.

Let that set in, and then realize the truth in it. We’ve seen huge buy-ins that got busted before. Think about everybody the mid-2000’s Yankees dumped money into, emptying out hulls of Kevin Brown, Mike Mussina and Randy Johnson. How about the Marlins multi-buy-ins and -outs? Don’t forget about the Cubs and those huge checks they handed Alfonso Soriano, Carlos Zambrano and the walking disaster Milton Bradley. So we’ve seen this before, but never, ever quite this big of a fall-off.

What makes the destruction of the Sox the biggest disaster of them all? It all starts in where it happened. Anything that happens in Boston baseball is on as grand of a stage as there is. Even the failures are historic, and the escapes from them. They traded the entire upper level of their minor leagues for Gonzalez, just a few days before handing Crawford the richest deal of the 2010 winter. In the process, they changed the entire face of the franchise, and on paper, they looked to be the favorites for the American League, at the very least.

But instead of a third World Series in a decade’s time, they ended up being the greatest paper champs ever, because those signings were the highlights of the year in Bean Town. After rarely ever putting their full squad on the field, hosting pitchers that drank more beers than winning games and blowing the biggest lead in one month in baseball history, somebody had to burn. Manager Terry Francona took the burden of the burning ship last year and was made to walk the plank for the club’s failures. GM Theo Epstein may have been the smartest of the whole group, and he jumped off the Titanic on its way down. Anytime the Chicago Cubs, his new club of design, is seen as a safe haven, that’s the realest sign ever that everything’s gone to hell.

But in the end, that proved to be scapegoat central, because as this year’s disaster showed, this was a crew beyond saving. So the fire sale started slowly. When local legend Kevin Youkilis was dealt, that moved the Richter Scale. But when new GM Ben Cherington found a way to move a mountain, three weeks after the non-waiver trade deadline, it was a staggering reality: The Sox were waving the white flag. It was never going to happen with this team, and a quarter of a billion dollar reset button got hit.

Yet one man’s trash is another’s treasure, and that was proven at both a historic rate and time. Something had to give. Fortune shined on the Sox for the first time in the fact that they actually found the perfect team to take on some of their huge yet empty contracts. The Los Angeles Dodgers’ new management is set on making huge splashes until there’s no more water left in the pool, and by assuming the bulk of the lost money the Sox had on the books, they’ve continued to do that at a rate even the Yankees may not go all in with. And of course what happens? Adrian Gonzalez hits a homer on the first pitch he sees, something he set a career-long drought on trying to pull out of before his exile from Fenway. That’s poetic justice at its grimiest.

But what’s next? Boston isn’t a place where the idea of rebuilding will be accepted. The cupboard isn’t bare, but they are in the American League East, where average ends up looking like the Baltimore Orioles did over the last decade. They will be passed in a hurry, and catching up to the pace the Baltimore Orioles, Tampa Bay Rays and Toronto Blue Jays are growing at is hard enough as it is. And that’s not to mention the Yankees. The fate of the Sox will forever be aligned with their rival in the Bronx, and as of now, it’s only a rivalry in tradition, because there’s no comparison between the two on the field. That won’t fly for long at all, but how can the gap be narrowed?

This rings even louder when it’s considered how much further they have to go to really be at a true reset. Although they unloaded $261 million worth of players so far, there’s still more to go. John Lackey and Dice-K are still sitting on the bench, eating like kings but performing like serfs. There’s Jon Lester, who’s still pitching like he’s at happy hour. Clay Buchholz, Andrew Bailey, Jacoby Ellsbury and Dustin Pedroia spend more days with DL next to their names than their actual positions. This is a mop-up job that’s just begun, yet is subject to a brutal irony.

The only way they can fix it is to go back into the free-agent jungle again, checkbook spraying shots everywhere until it hits something, anything that can fix what’s been shattered in Boston. Good luck to anybody that signs up for that. At least there’s a good spread on the clubhouse buffet to ease the pain, allegedly.

4 Replies to “Everything Must Go: The Tragic Red Sox Yard Sale”

Everything Must Go: The Tragic Red Sox Yard Sale

Baseball Armed And (Not) Ready? How Baseball’s Best C…
4