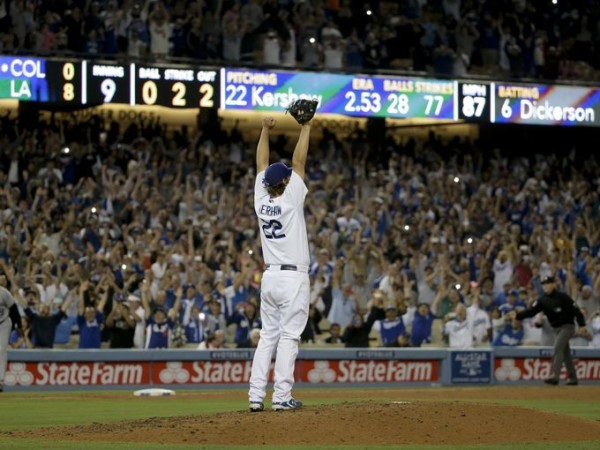 Early on in the year, it’s seemed like something has been missing in Major League Baseball for some reason. That’s because there was: the ever-present specter of Clayton Kershaw, looming every fifth day to more likely than not showcase pitching brilliance of the most florescent manner.

Kershaw may have bended the laws of the basic understanding in regard to baseball this week with his work on the mound. How can you be better than perfect? Surely, the late Curt Hennig would scoff at this notion, but there is a legit case that Kershaw has taken excellence to an entirely new level. And while Wednesday night’s no-hit effort by Kershaw does not stand among the 21 perfect games in modern MLB history, Kershaw’s masterpiece surpassed even the standard for the summit of pitching; in true effect it was even better than perfect.

His magnum opus against the Colorado Rockies was a study in complete dominance. He took a team that is leading the National League in total batting average by over 20 points and shut it down completely with just 107 pitches, striking out 15 along the way with zero walks. That is an average of just under 12 pitches per inning, or four pitches per at-bat. The Rockies neither hit anything hard nor soft in between the lines that took the typical “amazing effort” to preserve the masterpiece. Rather than put the game in anybody else’s hands, Kershaw just completely took ownership of himself via the game’s greatest arsenal of pitching weaponry today.

In other words, Kershaw was able to hold the club hitless and handled the lion’s share of the work himself, while completely disarming the opponent on his own. He issued no walks, and his defense was only accountable for 12 outs on the night. Well, 13 if you count the seventh-inning error Hanley Ramirez had at shortstop that ended the bid for a perfect game (Kershaw responded by striking out two of the next three batters to escape the inning). Yet, however you slice it, it was far from “just another” no-hit bid: It may very well have been the most dominant single outing in MLB history.

Now, it can be argued that a perfect game trumps any no-hitter in terms of dominance from a pitcher. And in many cases, this holds true; no runners reaching base is an immortal task that is the ultimate pitching accomplishment. And in the case of some no-hit outings, there are some that, while being unquestionably brilliant outings, have been held together at the cost of overlooking other portions of the effort. And, as all things must when attempting to separate the elite from the great, looking at how the milestone was met can tell the true story of how a game should be accurately remembered.

Case in point, look at the quality of the efforts that have gone into other no-hit/perfect games recently. For recent no-hit efforts that have seen at least 12 strikeouts during the effort, it took Matt Cain 125 pitches to complete his perfect game two years ago, and Tim Lincecum tossed an enormous 148 pitches to meet the mark last year. Linecum’s overwhelming volume of pitches to hold his together (which subsequently kept him from making his next scheduled start) or Edwin Jackson’s eight-walk, 149-pitch no-hitter from 2010 made them as much studies in survival as they were measures of excellence. Yeah, they were great outings due to keeping the ball from the grass but rather questionable in effect otherwise.

Yet when looking at all of the dominant outings that have been issued over the history of the MLB, even of the perfect nature, it is tough to say that anybody threw a better game than Kershaw did. It is not on Kershaw that there was an error made over the course of his work of art, and it doesn’t dull the outcome in the slightest. One bad play behind a pitcher should not change how the quality of the actual pitching is perceived. Looking at the history of the other 241 no-hitters and perfect games issued since the start of the modern era in 1901, there are a few that come close, but none quite hit the level of what we just saw this week.

For example, take the previous two perfect games thrown by Cain and Felix Hernandez. The King struck out 12 on 113 pitches, while Cain stuck out 14 over 125 pitches — perfect, but not as brilliant as Kershaw’s outing. Nolan Ryan, the king of the no-hitter with seven, had some dazzling outings en route to reaching this mark — 17 strikeouts against four walks in 1973, 16 strikeouts with two walks in 1991 — but control was never his forte.

Perhaps the closest cases for argument to rival Kershaw’s outing are of the poetic variety, as they were issued by two of the other greatest southpaws to ever pick up a ball. In 1960, Warren Spahn struck out 16 Phillies while walking only two in his first of two career no-hitters.

However, it was Sandy Koufax, the Dodger great that Kershaw is most easily (and increasingly justifiably) aligned with, who issued the most replicable game to his. An owner of four no-hitters, it was his perfect game in 1965 that was his best. On 113 pitches, he struck out 14 Cubs in the same Dodger Stadium that Kershaw took to on Wednesday.

The only difference between the efforts of the great Dodger lefties in history were minute: six pitches and one variable going in both directions. It came down to one error behind Kershaw but one more strikeout in his favor. So when factors under the control of the pitcher are assessed, it is hard to say that there was ever any better. In a game of inches and margins, Kershaw aligns yet again with Koufax in the end.

It comes down to a battle of the definition of “perfect” pitted against the perception of it. Maybe, perfect isn’t quite as flawless as it used to be.

2 Replies to “Did Clayton Kershaw Pitch The Greatest Game Ever?”

Did Clayton Kershaw Pitch The Greatest Game Ever?