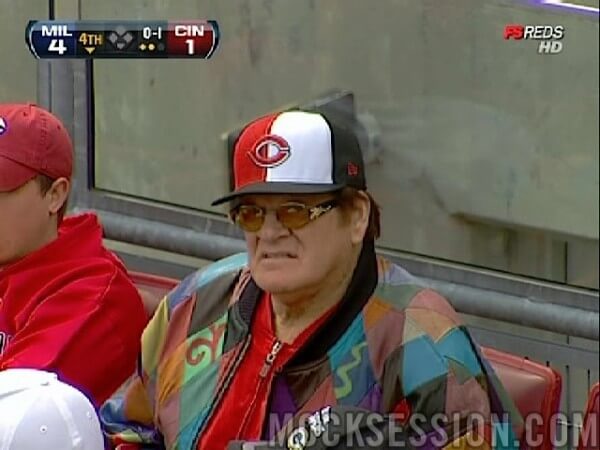 Pete Rose wasn't in the Baseball Hall of Fame yesterday. He isn't there today. He won't be there tomorrow.

Somber and sobering words for one of the game's greatest players. Yet, the fiasco that has surrounded Rose for years continues to draw attention.

It's a subject that can start a sports conversation from a mile away. Should Rose be in the Hall? Or was breaking the sport's number one rule too much?

This post isn't here to discuss the merit of either argument. In fact, after all these years, the arguments have turned into clichés that everyone has heard before. It's old, it's tired, and it's most likely a waste of air to go into them.

Rather, this post is an observation that was taken in during the recent 30 for 30 ESPN short film directed by Eric Drath. In "Pete Rose: Here Now" (you can watch here), Drath shows what Rose is up to these days and where he stands on the same issue as always.

Rose works in Las Vegas. He sets up shop in a casino and signs autographs for a living. He pleads for forgiveness in the film, citing reformed criminals who were allowed in the Hall.

Is he right? Absolutely.

Is he sad? Even more so.

The all-time hits leader's biggest obstacle in getting into baseball's sacred ground has always been his own hubris. He refused to admit to gambling on baseball for years. Adamant, up-and-down denial.

When he did admit to the act, it happened to coincide with a book promotion.

Rose as a player stubbornly tested arms, wits,and everything else the opposition had to be tested. He did it often, he did it well, and he did it without an ounce of remorse.

Some people never change, and Rose still comes off as the ego-driven maniac that drove opponents crazy. His remorse seems drummed up as a last-ditch effort for more glory.

To put it bluntly, Rose still hasn't learned the lessons that drove his deceit in the first place.

This country is one of second chances, and professional leagues are no different. However, one of the most important factors in offering another chance is humility.

Rose and humility belong together in no sentence other than the one you're reading now.

One would think after years of being kicked in the stomach by a past demon, he'd have figured it out by now. It seems fathomable that he would drop to both knees and plead for forgiveness.

That's not the way Rose is, and it's why his path to post-career glory is blocked. That's why his job is signing autographs in a Las Vegas casino every day.

He still points fingers. He still says, "Yeah, but..." He still refuses to find humility and grace.

Instead, he's getting older and the story is getting sadder.

At the end of the eight-minute film, Rose talks about not making the Hall of Fame. He cites the criminals; he says he should be in, too.

Then, as the camera follows him out of the casino, a quote from Rose is played.

"19-hundred 72, that's how many winning games I played in. So, that makes me the biggest winner in the history of sports; no one else can say that....I was a winner." -- Pete Rose

Ironically, all the wins end with the biggest loss of all.

He's right. He was a winner.